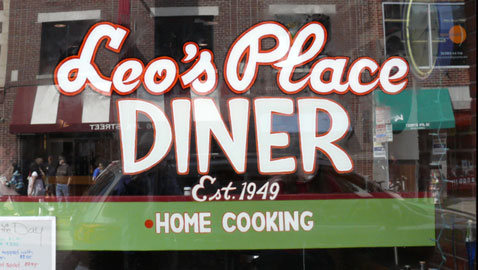 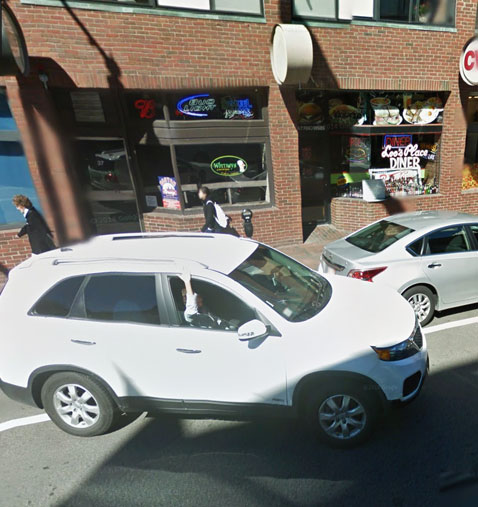 Leo’s Place Diner closed in January but is due to be replaced next month by another all-day-breakfast eatery. (Photo: Google)

Finding there were already enough noodles in Harvard Square, a proposed Noodle Project restaurant has switched to a format that honors the business it replaces: Leo’s Place Diner, which lasted 32 years at 35 JFK St. before losing its lease in an apparent misunderstanding with its landlords.

While Leo’s Place owners Richie and Raffi Bezjian look for a new location nearby, Brake Fast is to open in its place toward the end of June, serving breakfast fare from 7 a.m. to 7 p.m. Fridays and Saturdays and from 7 a.m. to 4 p.m. Sundays through Thursdays, manager Jeremiah Tracy and attorney Anthony Galluccio told the the License Commission.

“Leo’s Place did have a 7 a.m. opening, so we think we’re okay in that respect,” Galluccio said. “The floor plan and seating all stays the same, there are no changes at all. Just some cleanup work and business will convene. We felt it was important to get this particular location up and running    quickly and get into a service position for the square immediately.”

The Brake Fast team will have to replace some kitchen equipment. The Bezjian took theirs with them, Tracy said.

Commissioners expected to talk Tuesday about noodles and a 30-seat eatery that would be open until 11 p.m. seven days a week, but the idea changed when “after further investigation, it was found there were some other noodle concepts close by,” Galluccio said, referring to such restaurants as Wagamama, Le’s Vietnamese, Takemura and O Sushi for Japanese food, Bon Chon and Kaju for Korean and Spice Thai and 9 Tastes for Thai.

“I call this kind of an ode to Leo’s. It’s more of a breakfast concept, which we think is in need, to have a breakfast option directly in the square,” Galluccio said. Aside from an International House of Pancakes and Au Bon Pain, the square’s real breakfast competition is Zoe’s, a Greek-American restaurant that serves breakfast all day on the outskirts of the square at 1105 Massachusetts Ave.

Brake Fast might want to come back to the commission eventually to extend its hours, Galluccio said.

The License Commission hearing wasn’t quite so smooth for Xi Li and his proposed project, Wasabi at Porter – a Japanese restaurant with sushi that would go at 2088 Massachusetts Ave., Porter Square, ending the location’s long but fitful history with South Asian food.

After the Indian restaurant Maharajah closed in 2004, the site became an Afghan restaurant called Buzkashi – then Annapurna, with Afghan, Indian, Nepalese and Tibetan food, and last year the same owner trimmed the menu to just Indian and Nepalese food and renamed it Third Eye.

Although the property’s new owner has owned restaurants in Middletown, Conn., Manhattan and New Jersey, he faced tough questioning Tuesday and some hangover from the previous owner’s relationship with neighbors when it came to issues of noise, graffiti, trash and the rats that come with it. Commissioners also seemed wary when the new owner announced a change in hours on the fly, surprising his lawyer, and a potential opening date of June 1 that was quickly amended to July 1.

He also faced skepticism in a request for a new wine and malt beverage license, which Third Eye had. Police Commissioner Robert Haas wanted more input from neighbors, although most of those neighbors are other businesses, including restaurants.

Xi, who said he wanted to open Wasabi at Porter to be near a daughter attending school here, has another chance to win over the commission at its May 29 hearing. The restaurant would have 38 seats inside and 11 seasonal patio seats.