‘X-Men: Days of Future Past’: Mutant ’70s will delight fans, baffle most of humanity 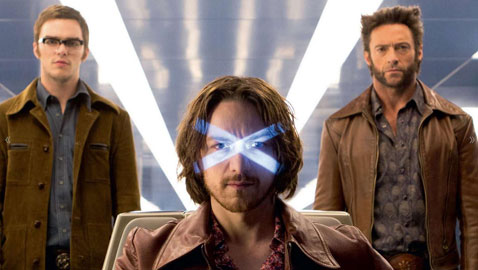 ‘X-Men: Days of Future Past’: Mutant ’70s will delight fans, baffle most of humanity

Maybe I’m getting cantankerous in my old age, but a barrage of cool special FX does not make a movie, at least not in my book, and the ongoing glut of seamless, more-real digital renderings only exacerbates the problem. Take the “Iron Man” franchise: great character building and back story in chapter one, but by the third one Iron Man suits are flying everywhere and pre-“conscious uncoupling” Gwyneth Paltrow gets a vanity moment to flash her sculpted, post-40 abs – a lot of generic silliness to something that started so rooted and firm. That trend was realized again last week with the “Godzilla” reboot as the spectacle of the spiked Tokyo tosser all but stomped out a solid performance by Bryan Cranston. Here, in a psychedelic flashback to the ’70s, the “X-Men” franchise sacrifices soul for the computer-generated spectacular. 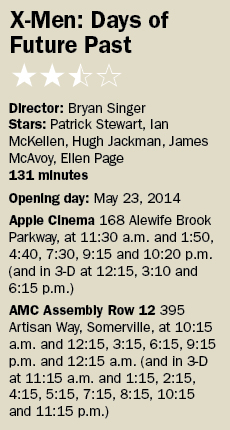 There are some clever, brilliant nuances to “X-Men: Days of Future Past,” such as the scene where Quicksilver (Evan Peters of “American Horror Story”) in a slo-mo microsecond aptly done to Jim Croce’s “Time in a Bottle” rearranges the trajectory of bullets and plays puckish pranks on the guards holding the guns about to take out Professor X (James McAvoy), Magneto (Michael Fassbender) and Wolverine (Hugh Jackman) or when Wolverine travels back to 1973 and wakes up next to a lava lamp and the shrill pitch of Minnie Riperton singing “Lovin’ You” (though I believe that was a ’74 or ’75 song). And so why 1973? Well there’s an impending apocalypse in the now that stems from the actions of a pint-sized McCarthy-minded White House adviser named Trask (Peter Dinklage) who wants to wipe out all the mutants, and to do so he has weaponized a solution by leveraging the DNA of Raven/Mystique (Jennifer Lawrence). Zany history-rewriting threads involving Nixon and Kennedy ensue and there’s a neat Vietnam spin reminiscent of Zack Snyder’s “Watchmen,” and a follow-on in Paris that intrigues, but the developing action becomes a tedious waiting game pulling the whole construct down and the flashing to and fro begins to take its toll.

The notion of the burgeoning superior race, genetic survival and evolution that leaves “us” behind has always been in the series and gets some good lip service here, but is whisked off as script mumbo-jumbo rather than as deep thought. The performers, in what may be the greatest use of thespian might to propel a fanboy enterprise, all hit their marks, and it’s touching as well as amusing to see Professor X humanized as a junkie of sorts who’s lost his way but gained the use of his legs through his wayward meanderings.

For anyone not familiar with the comic book series or who has not seen any of the earlier six installments, the film will discombobulate you with names, characters and oblique references. For loyals and those who have abided the “Avengers” films and can’t get enough, this is a generous cup that will slake your thirst. Be advised and go forth appropriately.

And for anyone who’s ’70s-reared or historically versed, the title might appear a shameless borrowing from the great Moody Blues album of the time. If it is  (and the title comes from the early 80s comic that the film is based on), there’s no reference, not even a sweet lay of the flute somewhere, and for all the flashback freneticism – which is done with aplomb, though some of the techno-stuff in the ’70s looks too 2029-engineered for the film’s own good – I wanted to know what was going on in the theaters during that late phase of the Nixon administration. A quick IMDB check shows “The Exorcist,” “Mean Streets,” “Badlands” and “Enter the Dragon” on the bill in ’73. If I were Wolverine, I’d take care of business quicker so I could go cool my heels at the cine.