‘The Rover’: Back in ‘Mad Max’ territory, Guy Pearce will kill to get his car back 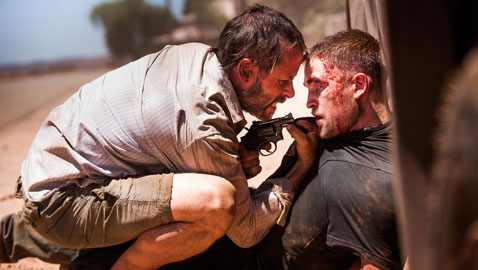 ‘The Rover’: Back in ‘Mad Max’ territory, Guy Pearce will kill to get his car back

In a lawless, post-apocalyptic Australian outback, the remaining shards of humanity fight to survive, often coming into conflict over scarce resources. If that sounds a bit like “The Road Warrior,” it should, both in the coveted use of vehicles as an extension of one’s machismo and the dearth of precious petrol, but what transpires in “The Rover” is less baroque and more intimate and rooted in the now. In fact, it feels strangely more akin to John Hillcoat’s “The Proposition,” which took place nearly a century and a half ago, and fittingly enough the star of that macabre outback western, Guy Pearce, pops up here again, finding himself back in a vast deserted wasteland punctuated with sparse outposts of human occupation trying to cling to civility in an otherwise orderless nowhere. 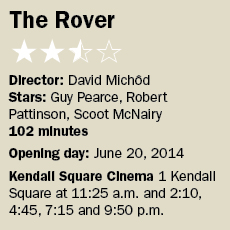 Pearce plays the barely named Eric, an aloof loner with an ostensible military background. The film opens with the tacit protagonist making a pit stop at an isolated karaoke bar (which looks more like a grimy torture chamber from a “Saw” movie than a place of merriment) for some water and a bite when a speeding truck laden with unsavory lads crashes, and its occupants quickly disembark and carjack Eric’s sleek, lean coupe. That’s it – from there on out, Eric will stop at nothing to reclaim his car. It’s a straight-up one-noter like “Duel,” propelled by Eric’s simmering resolve and the ever pungent question as to what else has to be in that car to make Eric want it that bad.

The future here is the result of an economic meltdown 10 years down the road. With the world just being stripped of its sense of order, places such as the remote outback have become the lawless west quicker, or so that’s the implication of the story attributed to actor Joel Edgerton (“The Great Gatsby”) and director David Michôd. Michôd, who served notice with the explosive Aussie crime drama “Animal Kingdom” in 2010, is right back in the brutal milieu that made critics and audiences alike take pause, and “The Rover” is just as bloody, if not more so. The barren, sun-scorched landscape doesn’t offer much life, and what humans the Rover encounters are grimy caricatures that seem right out of Wes Craven’s “The Hills Have Eyes.” And there’s a brimming tension in every scene, always rife with the prospect of a violent eruption.

It’s a neat trick by Michôd, but the film overall doesn’t hold up – it bleeds out, and the ultimate reveal is a lackluster disappointment.

Sorry, I forgot to add that there’s a subplot about adversaries bonding through unlikely circumstance, with “Twilight” heartthrob Robert Pattinson in the film as the wounded brother of one of the trio who jacked Eric’s car, ultimately becoming the homing pigeon hostage of the relentless Rover. Pattinson’s Rey is not quite all there, but he’s pretty good at coming to the rescue (taking out a military outpost, no less!) when the plot requires it, which makes one take pause and wonder if Rey isn’t playing with us or if Michôd and Edgerton’s neat idea was only half-baked. It’s an annoyance, but nevertheless, Pattinson proves he’s more than just a pretty face as he holds his own with the accomplished Pearce (“Memento”), who has the innate ability to raise the level of any project he’s in.

Chaotic landscapes where malice, misdeeds and murder go unchecked is a staple of storytelling. The hook in movies such as “The Road Warrior” or many a western (“The Wild Bunch” or any Sergio Leone classic) to making the gray scape fly in audiences’ minds is the central antihero who clings to a higher sense of moral order – one who, behind their aloof, steely eyes, embraces loyalty, sympathy and righteousness, much of which is missing from “The Rover.” You expect it to crop up, and there are signs of it like a mirage in the desert, but as quickly as it shows it vanishes in the vastness of violence. Perhaps that’s the reality of how the world would be, but the myth would have made a better movie.