‘Life Itself’: Roger Ebert gets his movie, and it’s a romance with film, Chaz, Siskel 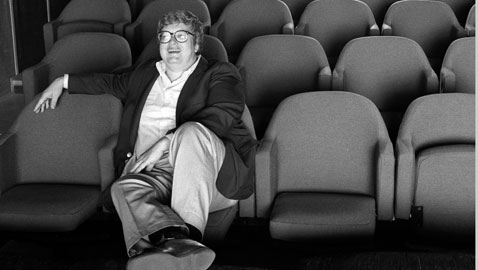 ‘Life Itself’: Roger Ebert gets his movie, and it’s a romance with film, Chaz, Siskel

Roger Ebert (loosely paraphrased) felt movies were “machines” for examining life, an extension of dreams, fears, aspirations and so on, places a person might not otherwise venture. The film “Life Itself,” a documentary about Ebert and his final days, is such a poetic reflection, challenging the viewer to take stock of what a life well-lived should look like and what it might be like to confront death. 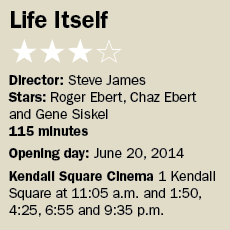 Ebert, who grew up of modest means in Illinois, was obsessed at a very young age with newspapers and telling stories. At the University of Illinois he relished being the school paper’s editor and making critical editorial and ethical decisions on matters of world-shaping importance, most notably the assassination of John F. Kennedy. He would later stumble into the post of film critic at the Chicago Sun-Times when being a film critic was not a coveted or much respected job. Along with Pauline Kael, Andrew Sarris and Gene Siskel, he helped redefine the role of the critic and transform it into an art form.

But “Life Itself,” which takes its title and cue from Ebert’s autobiography, is more about a man’s journey into love and acceptance than it is about film and film criticism. Invariably it deals with film, because without movies, Ebert might have become lost; and he wouldn’t be Ebert had he not met Gene Siskel, with whom he had a tumultuous Oasis-brothers-like relationship during the long and successful run of their TV show. Errol Morris, Martin Scorsese and other notable filmmakers touched by Ebert’s influence chime in. The film’s director, Steve James, who knocked it out of the park in 1994 with “Hoop Dreams,” also has benefited from Ebert’s touch, and the film wisely delves into the dicey, intimate relationship between critic and subject.

The true love that blossomed into Ebert’s life late – beyond cinema – came in the form of his wife Chaz, who recounts their meeting at AA when Ebert was drinking and stumbling and not that nice of a human. The film also follows his battle with cancer during his final four months as tumors, infections and operations took away most of his jaw and his ability to eat or speak. Amazingly, through it all, I wonder if there has ever been a happier person so close to death’s doorstep. Be advised: There are many uncomfortable shots where you can see right through Ebert’s dangling jaw to his gauze-padded neckline, and while he has little control over much of his face, the twinkle in his eye and suggestion of a grin radiate warmth, caring and peace. It’s amazing to witness how a man once of such regimented control was able to let so much go, so late.

Not fully explored is the changing landscape of film criticism in the face of blogging, YouTube plastering and fanboys, let alone the erosion of print. For a better look at that (and it doesn’t quite fully jump into it either) I’d suggest Cambridge resident Gerald Peary’s “For the Love of Movies.” Neither do the naysayers of the Siskel & Ebert express – and there were plenty of them out there who thought the show was a vulgar hijacking of film criticism (and they probably think the same too of said fanboys, bloggers and YouTube jockeys) – don’t get to sound off, but the Gene & Roger complex, driven by love, envy, combativeness and common interest, gets framed with poetic brilliance.

A lot of ground is covered in “Life Itself,” but at the core it’s about a man, his passion and his transformation. You don’t have to like Ebert (at times I found him pompous and arrogant, but he was also the true populist voice of cinema) to appreciate the arc of his life or even film itself. Cinema was the path for his odyssey, and along the way two people influenced his life with altering impact. James knows this palpably well and wraps his camera around it in a loving, yet critical, embrace.