‘Dawn of the Planet of the Apes’: Primates can’t win when hawks lurk in their ranks 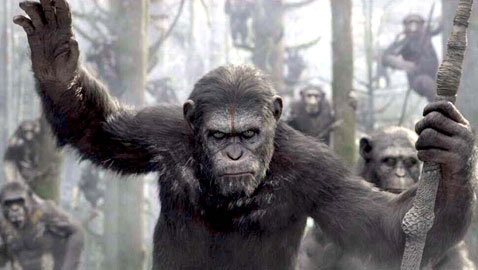 ‘Dawn of the Planet of the Apes’: Primates can’t win when hawks lurk in their ranks

The one thing that always struck me about the “Planet of the Apes” franchise – old and new – is the obvious, but not often discussed, allegory for slavery in which the master becomes the slave fighting for freedom. Sure, you can take it as a straight-up sci-fi thriller, but most post-apocalyptic, post-civilization flicks are about man losing control and trying to regain that control or at least a safe foothold where the seeds of civilization can be nurtured back. It’s less intimidating when zombies rule the land, but when those once incarcerated and mistreated are freed and look for a little payback, the nightmare becomes palpable and pulls on our collective social guilt. 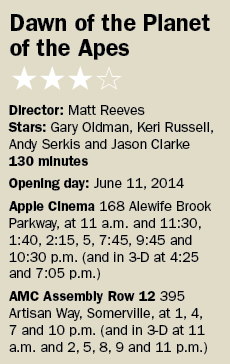 Much of this percolates up in the “Dawn of the Planet of the Apes,” the newest chapter in the series reboot that has swapped top-shelf makeup and costume craftsmanship for CGI wizardry and crash bang FX (the old-school costuming is still a wonderment, and more impressive than its computerized successor, especially given the test of time). It’s 10 years after the last episode that left Caesar (Andy Serkis, who as Gollum in “The Lord of the Rings” trilogy elevated animation acting to an art form) and his ape posse living in the woods outside San Francisco. In those years a simian virus has wiped out most of the human population, but pockets persist, including one on the other side of the Golden Gate Bridge in the burned-out bowels of the bay city. The humans wanting to get a dam flowing to get power back on infringe upon the apes’ territory (neither really knew the other existed) and so a rub for resources and rights ensues.

On both sides there’s hawks: Gary Oldman as the shoot-first Dreyfus, leader of the San Fran mob and Koba (Toby Kebbell), the ape scarred in human captivity, who wants a war at all costs and subverts Caesar’s efforts at diplomacy and peace. In the middle looms Malcolm (Jason Clarke, the clear-eyed water torturer in “Zero Dark Thirty”), an engineer, the other voice of reason and a lieutenant to Dreyfus. They’re all idealist, but all that they do is a match in fuel-soaked tinder.

Through it all, director Matt Reeves (“Let the Right One In”) pegs the perfect balance of conflict and careful character development without going full-on into CGI or maudlin melodrama. Conflict builds pointedly and logically, propelled and redirected by underhanded misdeeds, and ultimately breaks in a near operatic crescendo.

In that too, however, the contemplation of oppressor becoming the oppressed and the social plumbing of such a role reversal gets lost as things move toward a clichéd battle of good versus evil. It’s blockbuster necessity but also a lost opportunity, because in that gray in-between there is something poignant and provocative that fades. The film’s a pleaser, no question, ties seamlessly to “Rise of Planet of the Apes” and sets up the next chapter. Nothing to go ape about, but a good way to cool your heels in the heat.