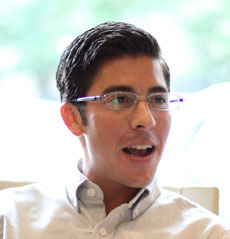 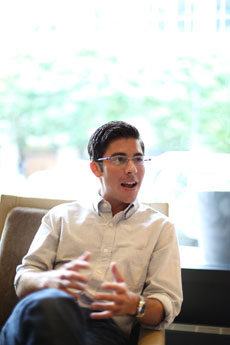 Haystack Mobile, a startup that lets people trade on information about available public parking spots, has a official launch at 4:30 p.m. Thursday for Cambridge and surrounding communities. Boston Mayor Martin J. Walsh has criticized the new app but plans no real action to stop it.

First launched in Baltimore, the Haystack app is designed to provide a solution for places where parking is tight. With the help of the app, drivers send out alerts to other users before leaving a street parking spot. The first seeker to respond gets detailed information on where the spot is and directions to take it over. Afterward, the successor pays $3 via the app to the previous parker. Haystack would take 75 cents from the fee, and the rest goes to the user.

“We encourage innovation, particularly relative to addressing our transportation challenges,” the Walsh’s office said. “Services like Haystack, however, artificially inflate the cost of parking and allow individuals to profit from public space.” The statement also clarifies that the city is not working with Haystack.

“Haystack is simply a platform that allows neighbors to exchange information,” said Eric Meyer, the company’s founder and chief executive. “And neighbors have every right to exchange that information.”

According to Meyer, Haystack benefits city dwellers. He believes the app helps improve the flow of traffic by reducing traffic congestion, letting people know where a spot is opening up and how to get it efficiently, without randomly circling and hunting.

“If you can take several people every day who are not circling for 30 minutes to an hour, that’s gonna reduce traffic congestion,” Meyer said.

Haystack also helps the city turn over its meters more quickly, adding to revenues, he said.

While the city of Boston criticized Haystack, last year it promoted a similar technology, buying sensors that trigger when a parking space empties and encouraging drivers to download an app called “Parker” that directs them to those open spaces. While it still requires a driver to have a smartphone, the app and its use is free.

“Compared to Parker, Haystack is more effective and is a much less capital-intensive expenditure,” Meyer said. “The City of Boston has spent a whole lot of tax dollars on a capital-intensive sensor-installed system like Parker, but Haystack actually costs the city nothing.”

He added that Haystack is more advanced that Parker, because Parker doesn’t know how big a vehicle can go in a spot, but Haystack does. It also knows how far the user is from the desired spot. And the $3 per transaction is much cheaper than a garage in a big city, Meyer said. 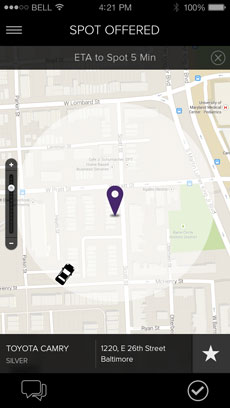 A screen capture shows the Haystack app at work in its hometown of Baltimore.

Originally from Upstate New York, Meyer graduated from University of Rochester in 2012 and moved to Canton, a neighborhood in Baltimore. Canton was busy, with lots of good restaurants and stores to go to, but cursed with parking issues. He came up with Haystack after collecting several parking tickets; the $3 fee and what share the company took was a refinement of the six-person Haystack team.

“We’ve come to a conclusion that offering a small incentive for neighbors to offer up their spots is the best way to make this whole smart-parking system work,” Meyer said. “Haystack doesn’t work if neighbors don’t offer their spots up.”

Launched officially in Baltimore on June 2, Haystack has gained thousands of users in its birth city and has successfully made hundreds of transactions. When a few users moved to Boston and complained about its parking, Boston became the company’s second target, Meyer said.

Boston is not the only city opposing parking apps such as Haystack. In San Francisco, similar apps such as Monkey Parking, ParkModo and Sweetch found trouble with local government, and Monkey Parking disabled its auction-style service last week.

“I think the San Francisco City Attorney’s action was unfortunate, and it cut off parking innovation,” Meyer said. “But I don’t think that will have any impact on Haystack.”

Previous parking app products, including one based in Cambridge, failed in years past, but there are still lots of people backing up Haystack, and State Rep. Jay Livingstone – who represents parts of Cambridge and Boston – is one of them. According to Boston.com, Livingston advocated strongly for the app on its launch reception Tuesday, although he also revealed ignorance about how the app worked.

Cambridge Mayor David Maher couldn’t be reached for comment. The City Manager’s Office opposed app-based car services such as Uber and Lyft in court last year, and the city’s License Commission took up work last month on regulating them.