‘Into the Storm’: Mix ‘Sharknado’ budget with the big-screen aspirations of ‘Twister’ 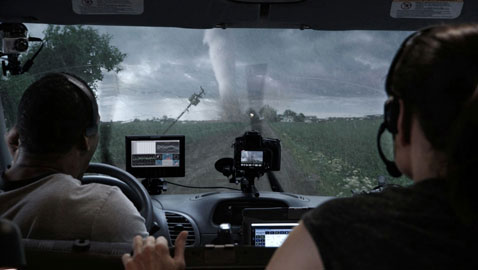 ‘Into the Storm’: Mix ‘Sharknado’ budget with the big-screen aspirations of ‘Twister’

“Into the Storm” is no “Twister,” not even a “Sharknado.” It’s not bad, mind you, but it’s not good, either. There are touches of camp and humor that add zest, though it never goes over the top like “Sharknado” – a good thing. What hampers “Storm” most are the insidiously stilted melodramas that occupy the screen between the two perfect storms that cut through an Oklahoma township on the last day of school. 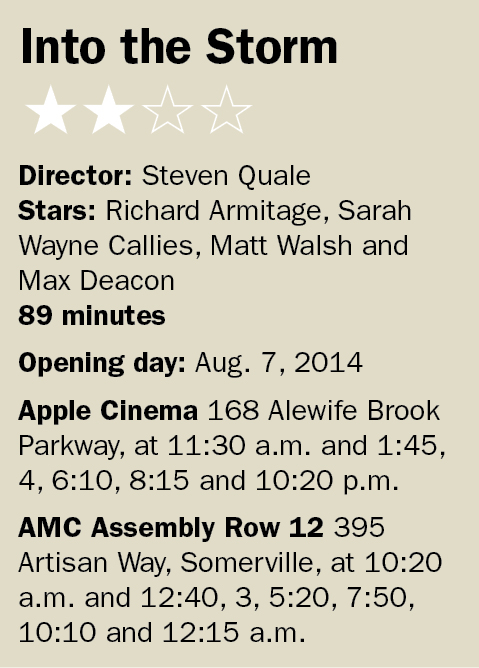 “Storm” is a humble effort with the budget of “Sharknado” and the big-screen aspirations of “Twister.” Even bolstered by a meaty budget, that 1996 film was no masterpiece, but it had masterful thespians Helen Hunt and Philip Seymour Hoffman in the cast, and flying cows. It also had well regarded cinematographer Jan de Bont (he shot “Die Hard” and “Basic Instinct”) taking the reins (his prior effort was “Speed”), which in a way ties us back to “Storm”: Director Steven Quale has toiled as second unit director on James Cameron projects. He might not quite have his hands around sculpting a full-bodied drama just yet, but the one thing he clearly does know are FX. The rendering of the massive twisters – one a flaming tornado – is vivid and viscerally done. As far as character and plot, that’s pretty much the eternal overcast sky while sitting in a steel-plated storm-chasing vehicle hoping for lightning and mayhem to strike.

The storm chaser in Quale’s effort is Pete (Max Walsh of “Veep”), who needs his money shot or his funding will be gone – and he’s got a whole crew and an armored gas guzzler to feed. Pete’s always late to the show, so he’s hired a Ph.D. meteorologist (Sarah Wayne Callies, from “The Walking Dead”) to make sure he’s the first one in and getting paid. Also going on in the Podunk town: Gary (Richard Armitage, Thorin in the “Hobbit” films) the high school’s vice principal, is having a bad single-parent day with his boys, Donnie (Max Deacon) and Trey (Nathan Kress), and graduation is scheduled. Then comes, as you can guess, the shock of tornados touching down.

Most everyone in “Storm” runs around with a video camera, which becomes distracting with egregious overuse (especially when Trey tries to save people one-handed while shooting) and inconsistency, but not as distracting as the cloying, annoying romance sparking between Donnie and his long-held crush (Alycia Debnam Carey). Thankfully the winds form funnels and make landfall. Beyond Trey’s Bieber bob and Armitage sounding ridiculously like Sly Stallone in “Rocky,” it’s almost gawk-worthy to see the school’s head principal (Scott Lawrence), who’s a dead ringer for Obama. Given that and with the exception of the two GoPro camera-strapped wingnuts who exist to do stupid human tricks on YouTube, there’s very little Okie about this studio-ized version of Oklahoma. The blessing is that this shower of intermittent inanity and cool CGI whirlwind is a brief 90 minutes.