‘Sin City: A Dame to Kill For’: All the red in green-screen noir epic comes out white 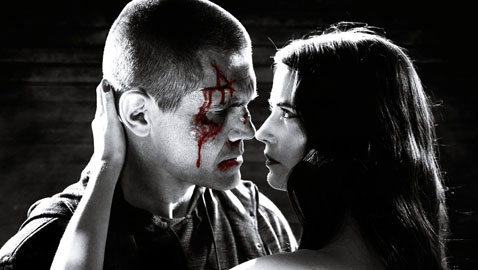 ‘Sin City: A Dame to Kill For’: All the red in green-screen noir epic comes out white

Much is the same and much has changed. Even if you don’t dig pulp, graphic novels (comic books that can be full of adult content on steroids) or blood (it’s whited out, no lie), you can’t deny the alluring cinematic opulence rendered by writer-turned-director Frank Miller and cinematic master-of-all-trades Robert Rodriguez, partnering again as directors. It’s sharper and far more encompassing than their 2005 “Sin” outing, which garnered a slow, long-running fan burn. That film was something new, something cool and dark, laced with a noirish ambience and a built-in cult affection. With genuine intentions, it sated and captivated as much as it filled its niche. There’s more of it here, but is more better? 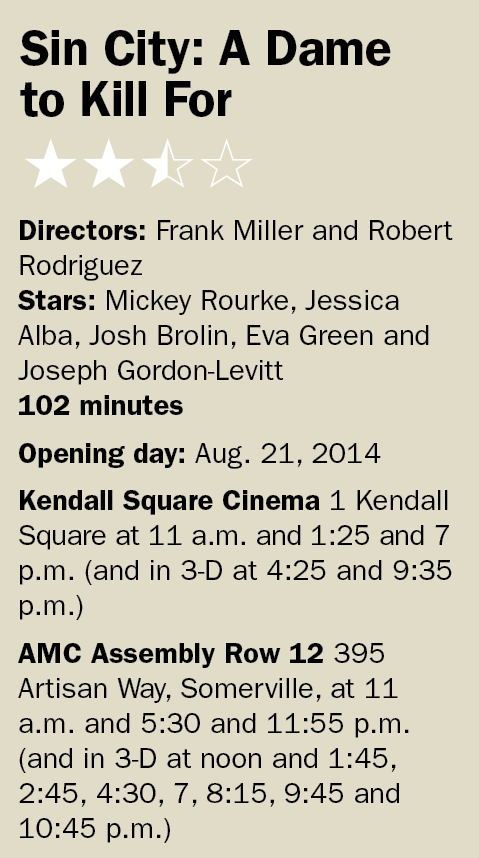 Like its predecessor, “A Dame to Kill For” is broken into four segments. Interestingly, the character of Dwight, which was played by Clive Owen in 2005, is played here by Josh Brolin and Miho, the lethal blade-wielding assassin from Old Town originally played by Devon Aoki is updated by Jamie Chung (“Sucker Punch”). The other players remain, including Mickey Rourke as Marv, the pulp-prose-spouting strong man with an iron jaw, Jessica Alba as the troubled object of desire, Nancy, and Powers Boothe as the corrupt and ruthless Senator Roark, whose family seeded Sin City (Basin City, but the “Ba” is X-ed out) with the pillars of ill repute back in the day to draw a dollar from those settling out west. The use of Rodriguez’s rich black and white photog helps mask some of those nine years in between.

Rosario Dawson’s back too as Gail, the head of the gun-strapped ex-prostitute militia that takes no shit from no man, especially cops. The new additions, which include Joseph Gordon-Levitt as Johnny, the card-sharking wild card who pisses Roark off to no end, and Eva Green as Ava, the dame in question, add fruits. Gordon-Levitt’s Johnny, while cool and hip and dexterous with a deck, eventually spirals off more into a non sequitur. Ava, however, is the center of all the sin, sex and plot twists. Green, who played the witchy warrior-sorceress Artemisia in “300: Rise of an Empire,” has everyone in Sin City under her spell. Dwight falls for her, but she’s married to a rich man and has a henchman/driver (Dennis Haysbert) who doesn’t let her out of his sight – and is a worthy throw-down for Marv.

Everything in “Dame” gets propelled by pulpy voiceovers, sudden violence and rapid-fire pacing that’s all layered against glorious green screen effects that are really something to behold. The tawdry urban backdrop, buoyed by eye-popping 3-D, evokes the tense mean streets of “West Side Story,” when the Sharks clash with the Jets. Robert Wise’s classic was neatly shot on a sound stage and didn’t pretend to be bona fide; it embraced its staginess. The scene is so visceral and affecting it doesn’t even feign to ask you for suspension of disbelief – you are there already because you believe. “Dame” works much in that manner.

The film’s at its strongest when Dwight, Johnny or Nancy are getting beat down and have to struggle to get back up. Marv’s a great incarnation, but he’s always able to take care of himself. If “Dame” wasn’t treading on the tail of “Sin City,” it might be the real deal. As is, it’s borrowing, embracing, but not necessarily furthering.

Two of the four stories were written for the movie, the other two come from the Miller graphic novel that inspired the first “Sin.” Those two new entries are readily obvious and don’t play in as well – plus there’s prequel and sequel mixing that’s messy and lacks confluence.

Absence of cohesion is the great undoing of “Dame.” It’s got the western-noir Badlands thing down pat, and some great moments to boot, but it doesn’t have the affecting bite the series’ bellwether did. It fills the bill the way dime store pulp filled the bus ride across town.