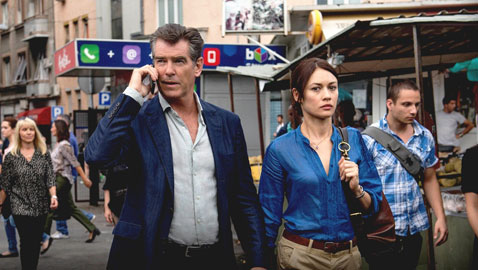 Old assassins may die hard, but in this plot-bouncing thriller starring Pierce Brosnan they’re also pretty hard to kill. Brosnan, still looking 007 fit in his early sixties, plays Peter Devereaux, a retired CIA agent called back into the game to help bring in a Russian double agent. The double agent has the goods on a Russian general who executed innocents and likely staged an act of Chechen terrorism to further his agenda, thus positioning himself to ascend to the apex of Russian political royalty. 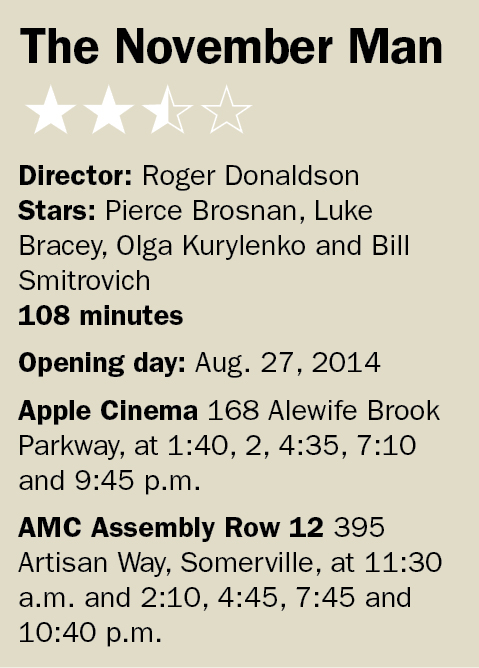 That premise might sound silly, and it’s hard not to think of Putin and the Russia of the moment, though there’s never any mention of the notorious president (the film’s based on Bill Granger’s 1986 book “There Are No Spies,” which clung to Cold War fumes). That aside, as a straight-up spy thriller, “The November Man” does offer fierce and feverishly paced rewards. The rub is that Devereaux happens to have loved the double agent in question (with whom he has a 12-year-old daughter – and a cafe on Lake Geneva – that none of the folks running the machine know of) and that causes his handlers some concern, so they assign Devereaux’s former protégé, a young can-do field operative by the name of Mason (a hunky yet generic Luke Bracey) the task of cleaning up the stink Devereaux is stirring up in Belgrade.

Add to the mix the very lovely Olga Kurylenko (the Bond girl opposite Daniel Craig in “Quantum of Solace”) as a possible love interest/foil and Will Patton as the smarmy honcho pulling the strings and there’s a lot of moving parts. Not all is what it appears, and the film, in the competent hands of Roger Donaldson (”No Way Out,” “The Recruit”), spins through a lot of red herrings and archetypes. Is “The November Man” a game of lethal cat and mouse between old allies like “Assassins” or “The Killer Elite,” is it about a righteous rogue on the run with a fetching femme à la “The Bourne Identity,” or a tangled web of political agendas that have snared a barracuda instead of a tilapia? The answer is “all the above,” and that becomes part of the problem – and a nagging one, until the next explosion or plot twist comes and your thriller ADD is onto the next point of attention.

Brosnan carries the film gallantly with just the right amount of bravado and disdain – and his time as James Bond and Thomas Crown goes a long way to help sell it. Kurylenko adds a tangy bite and gets the imperiled heroine part down pat, but she’s asked to do too much. Patton, who looks like a real player all roads lead to, gets lost in the shuffle. The real weak link, however, and more a victim of the plot, is Bracey. His Mason is a rote man-boy and a poorly defined one at that. He’s a cold killer, unstoppable, and then – poof, a 180 – Devereaux is in his head and he can’t tie his laces. Maybe a more seasoned actor could have better filled Mason’s shoes, but I’m not so sure.

That said, Brosnan and Donaldson seem to understand what it is they are dealing with and, like good mercenaries, they dutifully strap on their flak jacket and go about the mission.