‘Horns’: Mysterious growths get Radcliffe (fore)heading back into the supernatural 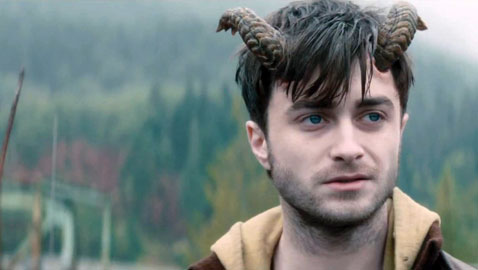 ‘Horns’: Mysterious growths get Radcliffe (fore)heading back into the supernatural

Daniel Radcliffe, the young British actor who had the world by the horns as the titled incarnation in the film adaptations of J.K. Rowling’s wildly beloved “Harry Potter” series, seems to have lost the wizard’s touch since closing the door to Hogwarts’ halls. Quirky ventures such as the ghost story “The Woman in Black,” the whimsical rom-com “What If” and “Kill Your Darlings,” in which Radcliffe plays beat poet Allen Ginsberg, haven’t quite buffed the actor’s star. Then there’s this curious immersion into the devil’s den. 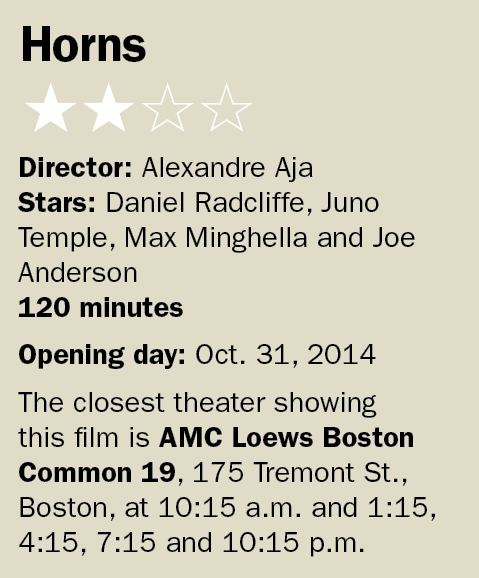 You can imagine the appeal of playing a Luciferian incarnation rooted in the material world.  The “Hellboy” superhero series nailed it with camp and gusto. Here, based on the novel by Joe Hill, aka Stephen King’s son, Radcliffe plays Ig (Ignatius), a DJ in a small Northwestern burg. He has a very public breakup with his girlfriend (Juno Temple) and becomes the prime suspect in her murder when she’s found with her head bashed in at the base of their romantic getaway spot – a tree fort deep in the Pac-North woods.

There’s not enough evidence to hold him, so Ig gets to go free, albeit suspended by the station, and after a few booze-fueled evenings and slightly odd happenstance, wakes up one morning with a set of horns. Devil horns to be exact, but no one seems to really notice as you might expect. Not the media circus that’s been following his every move. Not his parents. No one, and part of that’s because the horns educe people to speak and act on what’s on on their mind at the moment – which turns out to be a lot of weird sexual/fetish stuff, most pointedly demonstrated when two police officers proclaim their homoerotic affections for each other and discuss the merits of sucking each other’s dicks, or the soccer mom in a doctor’s office who in a near torrent of Tourettes spills the fact she has an African-American lover in graphic, racial terms.

Through all this paranormal outré, simmering in the background is the murder that needs solving. Then there’s the “why” as to the horns, which are never really explained. I haven’t read the book, so I can’t provide any deeper details, but I’m guessing “Horns” is supposed to be that kind of alternate reality where the explanation is beside the point. If that’s its aim, however, the movie misses wide; the olio of small-town melodrama, CSI shenanigans and otherworldly weirdness never finds even keel.

Maybe that’s because the director, Alexandre Aja, who served notice with the French chiller “High Tension” (2003) and the rework of Wes Craven’s “The Hills Have Eyes” (2006), doesn’t really do dark sardonic comedy or romance. The film’s best scene comes when Ig tells a sea of competing reporters that he’ll give the big scoop to the remaining crew in a last-man-standing set-to inspired and compelled by the horns. At some point, Ig garners a legion of snakes and in a world where clichés are ripe for the skewering, brandishes an expected pitchfork too. Heather Graham adds some dashes of delight as a despicable waitress who lies shamelessly to grab her 15 minutes of fame. For Radcliffe and the movie, however, it’s all about the horns. They’re compelling – but the story, not so much.