‘Interstellar’: Never too far from pastiche, no matter how far Nolan flies it into space 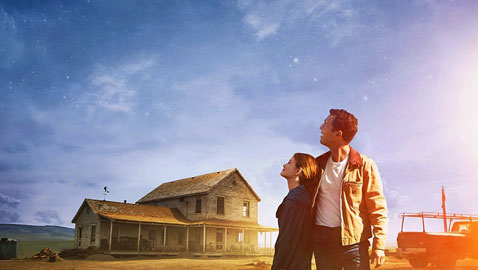 ‘Interstellar’: Never too far from pastiche, no matter how far Nolan flies it into space

Our planet is dying, and somewhere out in space lies the answer. That’s the lead-in to “Interstellar,” which could be a prequel to the post-apocalyptic film “The Road” with its giant dust storms sweeping in and suffocating vegetation and crops, leaving only corn as a viable source of food – and it too is on the verge of extinction. The clock is ticking. When the last ear is harvested, what what will man do to survive in the giant dustbowl? 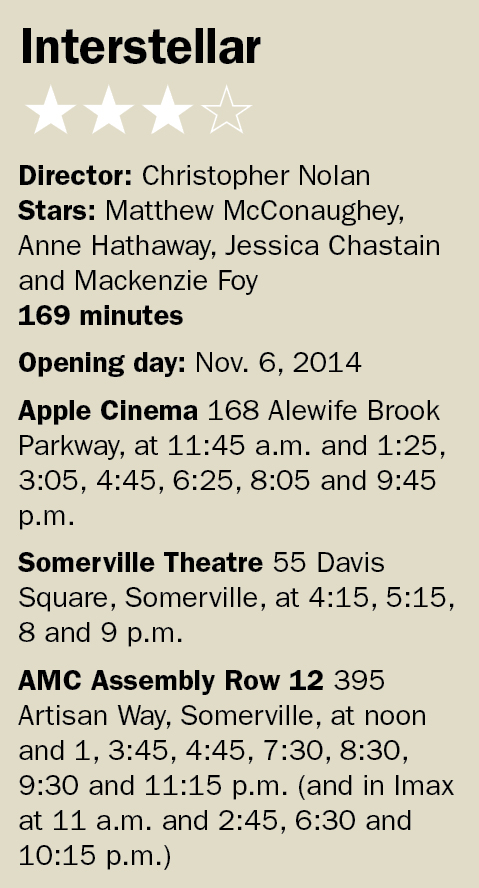 The good news for all our collective futures is that farmer Matthew McConaughey is a former NASA pilot; the bad news is that NASA no longer exists, but through a paranormal, “Close Encounters” kind of interference, the southern drawling actor’s Cooper is pointed to a grid point on the map not too far away where the vestiges of the space agency – and the hope of humankind – reside with Michael Caine and his daughter, Anne Hathaway. Cooper is the only one with mission experience, and before the clock ticks any further he and Hathaway’s Amelia Brand are on a turbo-charged space shuttle-like vehicle and heading toward a black hole.

It’s on the other side where they hope to find Earth-like planets and the remnants of an exploration party that tried the same thing a decade earlier. The astronauts can get transmissions from earth but can’t reciprocate. And then there’s the issue of time. One hour on one planet near the black hole equals seven years on earth. The ultimate rub, however, after a touchdown on a promising planet proves crushing, is that Hathaway’s Brand wants to go looking for her love who went out on the earlier mission and Cooper wants to get back to Earth before his kids (which have grown up to be a surly Jessica Chastain and a mumbling, drawling Casey Affleck) are older than he is – that time thing again.

The film, written (with brother Jonathan) and directed by Christopher Nolan (“Memento” and the “Dark Knight” series), who’s been down spectacle alley before with “Inception,” and shot by Hoyte Von Hoytema (“Her” and “The Fighter”), is a breathtaking immersion, worthy of any and all comparisons to “Gravity.” An erupting planet and frozen planet are rendered with all the barren visceral effect of “The Planet of Apes” all grown up and on FX steroids, and there’s a trippy “2001: A Space Odyssey” cruise through a black hole made all the more ominous and transporting by Hans Zimmer’s all-consuming score. But in those comparisons are the seeds of some of the film’s shortcomings: It’s pieces and shards of other films (the cornfield scenes are a reflection of the Kent’s humble homestead in the Nolan-produced “Man of Steel”) without going anywhere super new. The experience – and you do need to see it in Imax – is something else, but you’re pulled out constantly with thoughts of other signature efforts: “Oh, that’s from ‘Close Encounters.’ Now we’re in ‘Signs’ territory,” and so on.

“Interstellar” provides some unique plot twists and insertions that the studio has begged critics not to unveil, but not all of it (especially at nearly three hours) is evenly paced. When the film splits and there’s a thread on Earth and one on the other side of a black hole, you’re left with spectacular space exploration and a not-so-stellar melodrama amid the cornrows. The broader themes of love and searching ring true, but then again, Spielberg made this his calling decades ago. Nolan’s the new kid to the table, and a talented one, but while he grasps the epic scope and the wizardry of light and magic, he hasn’t quite figured out how to give the Tin Man a heart that’s real flesh and blood and not a symbolic ticker.