‘Foxcatcher’: Carell, Tatum and Ruffalo wrestle with a true deadly tale, and win 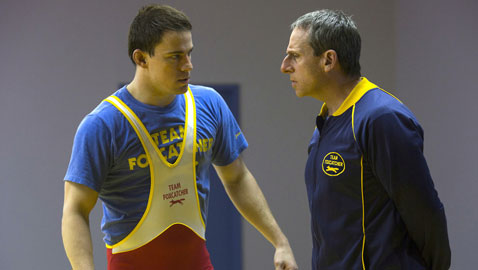 ‘Foxcatcher’: Carell, Tatum and Ruffalo wrestle with a true deadly tale, and win

Bennett Miller, whose directorial credits include “Capote” and “Moneyball,” should be considered something of a fictional documentarian in evolution. His first film, “The Cruise” (1998), a true documentary, followed fast-talking tour guide Timothy “Speed” Levitch on the job and in his semi-depressed other life. What gave the film soul, besides Levitch’s outpouring of quirk, was Miller’s ability to tap into the human element of his subject, capturing Levitch (the two went to high school together) at his chest-beating highs and self-questioning lows. 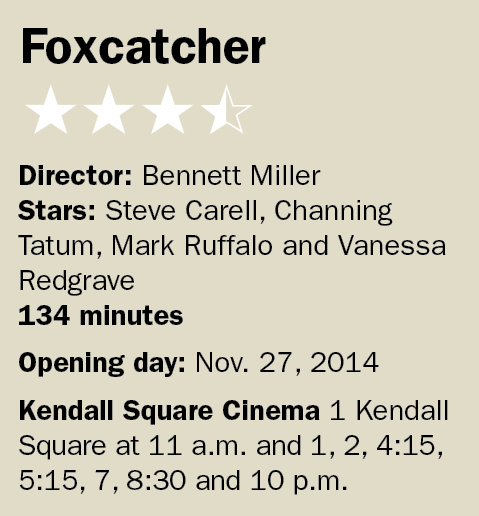 While “The Cruise” was a straight-up documentary, “Capote” (2005) and “Moneyball” (2011) were liberal, adapted spins on real lives and real events, both featuring outstanding performances by the late Philip Seymour Hoffman and the latter garnering perhaps the finest performance of Brad Pitt’s long career. Miller’s latest, “Foxcatcher” is dead in the mold of those films, and the indie auteur’s most soul-plumbing film so far.

“Foxcatcher” features three sublime performances. The one from Mark Ruffalo as 1984 Olympic gold wrestling champ Dave Schultz you expect, and you know from “Magic Mike” that Channing Tatum was growing as an actor. He delivers his most complete and most nuanced effort as Dave’s younger brother and co-Olympic gold winner, Mark. What stuns is the performance from Steve Carell, nearly unrecognizable with a prosthetic nose, as the eccentric do-nothing and billionaire John du Pont – not only because it’s so good, but because it plays against everything Carell has done to date. It’s the thespian antithesis to “The 40-Year-Old Virgin” and a sign of what the affable comedian is truly capable of.

Mark (Schultz, that is, and it is weird to keep hearing Ruffalo call someone else Mark all the time) and du Pont are depicted as fractured people from the onset. Mark, in the shadow of his golden moment, shuffles through the day-to-day adrift, living barely above the poverty line. Du Pont, on the other hand, is bored and self-important and sees himself as a patron of wrestling. He’s founded a wrestling institution on his sprawling estate that is the subject of the film’s title.

Out of the blue, du Pont dials up Mark and invites him to drop in for a visit. It seems like the man-boy and his largesse are about to embark on a mutually beneficial and fulfilling relationship, but du Pont – who’s quietly paranoid and thinks the country is weak and needs true patriots such as himself to look after what the founding fathers started – also harbors a megalomaniacal need for control and homoerotic feelings for Mark. Du Pont also wants Dave in his stable, but Dave’s an idealist and won’t relocate his family to Foxcatcher – not at first, but every man has a price. As du Pont buys his post as the official sponsor of the U.S. Wrestling Team, Dave comes into the fold, and as history has recorded, things go terribly, tragically wrong. (If you don’t recall the exact event, hold off your googling until after you’ve seen the movie.)

If Carell’s du Pont, whom the actor manages to cast in a sympathetic light as a man trapped inside mounds of unearned money, delusions, fear of failure and lack of worldly awareness, is the awe in Miller’s production, Tatum’s simple brute is its heart. His awkward, apish gait and dull affect endear the way Lenny does in Steinbeck’s “Of Mice and Men.” He’s knowing and in control, no doubt, but he’s also short on direction when not on the mat, something du Pont seems to realize and leverages with the help of some cocaine. Tatum’s great scene comes after Mark suffers an unlikely loss, more due to hubris and coke than lack of skill, and back in the hotel room goes rock star gonzo and binge-eats tray after tray of room service. It’s the one time the hulking grappler unleashes his rage, something that rides under the covers of nearly every scene in the guts of its two main protagonists. It’s subtle but always there, simmering and driving into the heart of an American tragedy.