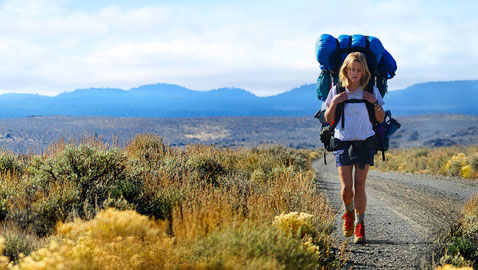 “Wild,” Cheryl Strayed’s wildly best-selling tale of redemption and re-rooting revolving around her 1,100-mile trek along the Pacific Crest Trail and descent into personal hell that preceded it, has been woven into a gauzy, cinematic veil of enchantment. This is mostly because of what the filmmakers choose not to do – in other hands the result could have been a generic chick flick or, worse, a Hallmark weepy with an A-lister on the bill – and how the narrative is pieced tartly together in an ingenious nonlinear fashion by writer Nick Hornby (“About a Boy”) and editor John Mac McMurphy (a pseudonym assumed by the director Jean-Marc Vallée, pulling double duty). Of course Reese Witherspoon as Strayed also deserves a lion share of the credit. 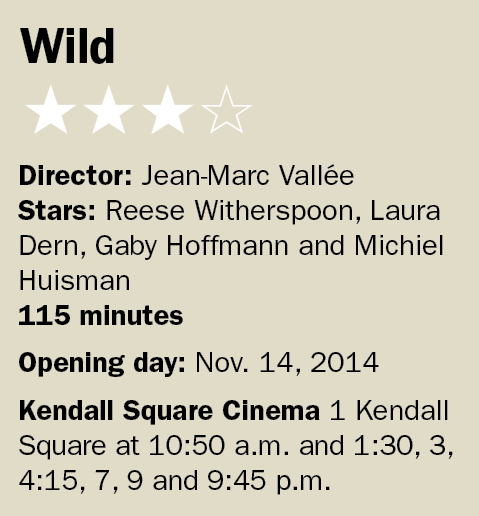 Vallée’s not the only person on “Wild” wearing two hats: Witherspoon bought the film rights to Strayed’s memoir and earns a producer’s cred as well. She’s dutiful as Strayed (not the writer’s given name, but the apt name she takes after her personal demons derail her first marriage) setting out on the arduous walkabout to find herself, purge and repent. When we meet her she’s angry at the mountain and nature, having just lost her hiking boots atop a summit, and we flash back to the start of the trek to see Strayed even more naive in the ways of navigating the wild.

There’s a humorous scene where Strayed can’t stand up because her pack is so laden. It’s a forehead plant and a chuckle, but it’s hyperbolic and lingers too long and subtracts from any sense of seriousness the audience has invested. Quickly enough, however, Strayed hits the trail and we get flashbacks to her in the throes of steamy sex with a McDreamy yuppie in a posh hotel room. Is it a lover she’s thinking of while on her quest, someone waiting for her and passion driving her? The answer is none of the above. It turns out Strayed was raised by a young single mother (Laura Dern, giving a large performance in a flash of a role). The two attended the same college at the same time and, as you can guess – and those who’ve read the book know – she dies and is the impetus for Strayed’s fall into anonymous sex with strangers, heroin use and worse.

Vallée, who’s Canada-born, delved into the gritty side of America with great authenticity with “The Dallas Buyers Club” and digs in deep again here. Witherspoon too, ever game and shedding her wholesomeness, jumps in fully, unafraid to bare all in scenes of gratuitous and depraved public fucking. They hit you like a hammer, but are gone before you can register the shock. The jumps from trail to the past are choreographed with care, creating an intoxicating cocktail of intimacy and insight. It moves so casually and seamlessly at times, however, that it might make viewers used to seeing Witherspoon at her blonde, cute best in “Legally Blonde” or “Election” wonder how such an icon of perfunctory idiosyncrasy could end up in such dark places. Readers of the book will know how to fill in the blanks. Others will be left to grope.

For such a simple arc with complex themes, “Wild” taps into the universal human condition. Most might not go Strayed’s route, male or female, but they certainly can understand and appreciate what she has gone through. Vallée and Hornby makes sure Strayed’s account of remorse and righteousness and tribulation, urban and remote, is filled with compassion and perspective. Vallée and Hornby get that and make it unisex without losing its feminine identity.