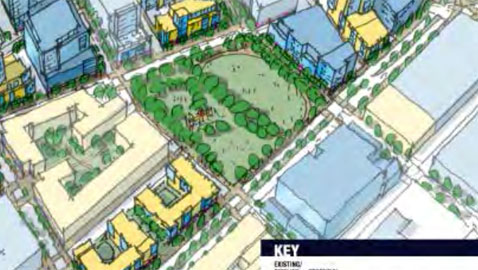 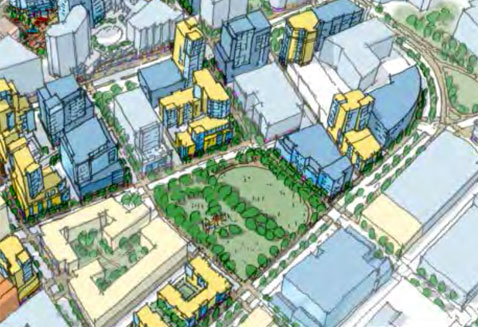 The federal government and city planners propose shrinking this potential Kendall Square park to a third of its size.

Here’s a voice against shrinking a proposed park in Kendall Square and for keeping the 7.5-acre public space championed in two major studies.

The city has wanted to get its hands on the 14-acre John A. Volpe Transportation Center for decades, finding it to be underused since it was built in the 1960s, but it’s only somewhat recently that Kendall Square has started to really take shape as a place for people, shops and restaurants in addition to high-tech and biotech businesses.

The Eastern Cambridge Planning Study in 2001 helped shape that, and its recommendations are also why current zoning calls for a 7.5-acre public park to go in where Volpe now sits. In 2011 and 2012 the city had another study, called K2C2, and among the recommendations from the $350,000 process with consultant Goody Clancy (which also played a role in the earlier process) was that same Volpe park.

“The proposed park at the Volpe site is going to be the heart of Kendall Square before too long,” said David Dixon, leader of the Goody Clancy team. “No matter where you live in Kendall Square or East Cambridge, this should be an important park for your community.”

Last year, The Boston Globe asked a panel of four to say what they would do with Volpe, and again three wanted prominent park space there.

The federal government’s General Services Administration has started its own process for redeveloping Volpe instead of letting the city do it, and the city has proposed zoning for what the administration wants. It shrinks park space on the Volpe parcel to 2.5 acres from 7.5.

Since the ECaPS zoning was adopted, many new public or publicly accessible open space amenities have become available, including community gardens on Charles Street, the Kendall skating rink, walkways and boat launch on the Broad Canal and the state and private parks developed at NorthPoint. In addition, over five acres of new public open space will be made available due to recent agreements with Alexandria and Boston Properties.

It’s true, more open space and a variety of it has come to Kendall Square, but an assortment of small parcels of open space is not equal to a large public park. Pocket parks are a welcome reprieve from urban stress, but they are not the civic solution worthy of a great city.

Even significantly smaller than the city’s signature Cambridge Common, a Volpe park stands a good chance of being at least as well used and important.

The common is a bit too isolated from residential and business life and suffers from under-programming compared with historical use of, say, Boston Common. An even better comparison might be City Hall lawn, where proximity to the bustle of Central Square makes for extremely well-used patches of grass, with people reading, napping or surfing the Web on city Wi-Fi at all hours of daylight throughout the summer and for as much time as spring and fall weather allows.

A 7.5-acre park replacing Volpe is more likely to look like a giant version of this, day in and day out, than the common. Considering Kendall’s use as an extended campus for innovation, Harvard Yard is another more likely model than the somewhat isolated 16-acre common – which the city says draws more than 10,000 pedestrians and cyclists daily, but fudges the numbers by including sidewalks, including those along Massachusetts Avenue. You’re likely to find more people rushing through or past the common than lingering within.

And while no prominent city festival or event has made the common its home, possibly because the neighboring Harvard Square is too big a draw, the 100,000 people drawn to the Cambridge Carnival International Festival and Parade each September need walk only a few minutes more to be at a Volpe park instead of Technology Square, which offers less than an acre of grass beneath partygoers’ feet.

The proposed alternatives to a 7.5-acre Volpe park are simply not as good:

Sure, it may be harder to rethink Volpe with such a large chunk of space set aside for open space – real open space, not counting paths connecting smaller parks referred to in the 2001 study as an emerald “bracelet” – but Kendall Square is as urban as Cambridge gets. If there’s anywhere developers can trade park space for the right to build tall and dense, it’s here, where the Cambridge Redevelopment Authority actually urged Boston Properties to build taller on Ames Street.

Some may remember that location: Its where the City Council let Boston Properties take away 42 percent of a beloved rooftop garden, partially in exchange for help developing two acres of “porkchop” park the city was already getting. That false win is counted among the “five acres of new public open space” the city cites as justification for another small patch of green in the heart of Kendall.