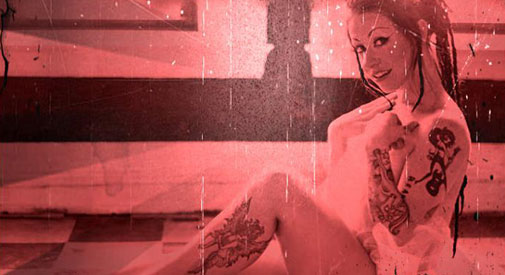 An apocalyptic lesbian fringe sci-fi horror musical – that’s the official description – has two weeks to find the funding to guarantee its four-show premiere in September.

The show, “Spider Cult: the Musical,” is the creation of ubiquitous poet Jade Sylvan, Boston Burlesque star Fem Bones and musician Catherine Capozzi. They’re seeking $10,900 on Kickstarter, with a stretch goal of $18,000, and have a good start: As of Wednesday evening, $6,119 was pledged.

“The goal is to create something that can grow beyond Boston and reach a wider audience,” said Sylvan, who initiated the project in 2013 after catching a “Spider Cult” segment of the Slaughterhouse Sweethearts’ horror-burlesque shock-show “Revenge of the Robot Battle Nuns,” entering its fourth season this summer. She approached creator Fem Bones immediately with an idea for a spinoff musical, she said.

“We think the world could use more sci-fi musicals. We also think there is generally not enough blood, gore and vomit in traditional theater. We also love tits and ass,” Sylvan said.

“I believe fully in the project and want so much to help it get made at the level it deserves,” she said. “The way Kickstarter works is, if we don’t reach our goal by May 14, we lose all the money we’ve raised so far.”

How could it fail? Here’s the plot:

“Spider Cult: the Musical” follows Scout, an orphan stripper, as she tries to escape from the ruthless and bloodthirsty all-female Spider Cult. These super-strong, telepathic zealots want to bring her back to their lair for some strange religious ritual. Little does Scout know, these demonic divas are hiding secrets about her mysterious past!

“Spider Cult: the Musical” will have its dates confirmed by June for a four-show run at Oberon, 2 Arrow St., Harvard Square. Information is here.