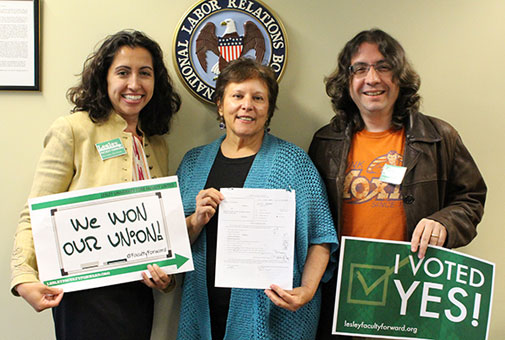 It comes close on the heels of the university’s adjunct, or part-time, faculty ratifying its first union contract May 12 after more than a year of negotiation, and only a few months after a core faculty effort for Faculty Forward was announced.

Citing gains at Northeastern, Tufts, Boston University and Bentley, the union called the core faculty vote its “fifth faculty union victory in as many months” and said in a press release that it meant more than 3,000 Boston-area educators are now “joined in a shared effort to improve their profession and the overall quality of higher education through unionization.”

“Today’s vote represents an opportunity for real change at Lesley – to make our university a better place to teach and learn,” said Dalia Llera, who has taught counseling and psychology for more than two decades at Lesley. “Together with our adjunct colleagues, we will finally be able to pursue the classroom investments we know are so important to the learning experience.”

As the vote suggested, not every core faculty member was aboard with the SEIU partnership. In March, more than three dozen Lesley instructors signed a letter saying discussion in the media was profiling “only a small percentage of core faculty members, several with limited experience at the university.”

After the vote today, a leader of those teachers expressed continued ambivalence.

“We value our colleagues and embrace opportunities for collaborating across the schools to support our students and further our scholarship of teaching and learning. The presence of the union will not dampen our enthusiasm for our core mission and these deeply personal professional activities,” said Sue Cusack, an assistant professor at Lesley’s Graduate School of Education and co-leader of the Kennedy-Longfellow/Lesley University Partnership.

The university offered this comment through spokesman John Sullivan:

Lesley University respects and values our faculty and their commitment to our educational mission. The core faculty’s vote to retain the Service Employees International Union follows active and engaged dialogue among faculty members during this past year about whether or not to unionize. With this decision now complete, we will continue to work together in the coming academic year as we proceed to the next steps of the collective-bargaining process. We look forward to continuing to serve our students in a dynamic and vibrant academic community.

The union called the role of educators nationwide “increasingly low-wage and marginalized, despite tuition increases and growing endowments” and said its work seeks reinvestment in the classroom, higher standards and improved stability. Tufts part-time lecturers signed a contract in October. Contingent faculty at Northeastern are negotiating a contract and there are union organizing efforts under way at Brandeis.

The core faculty vote was conducted by mail, with ballots tabulated at the National Labor Relations Board office in Boston. More than 85 percent of eligible faculty members participated in the election, SEIU said.