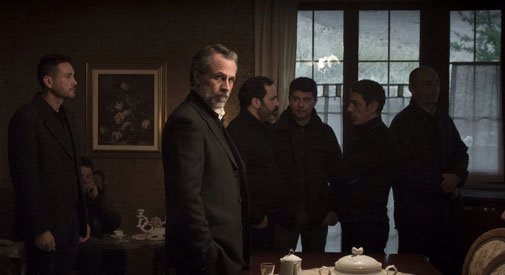 The three brothers in “Black Souls” lead very different lives: Luciano (Fabrizio Ferracane) runs the family goat farm in a remote village in the Italian foothills while Luigi (Marco Leonardi) and Rocco (Peppino Mazzotta) run mob operations in Milan. Luciano wants nothing to do with the new initiative and works tirelessly to steer his son, Leo (Giuseppe Fumo) away from it too. But Leo, who does a little strong-arming on the side himself,  has his sights set on Milan and beyond. 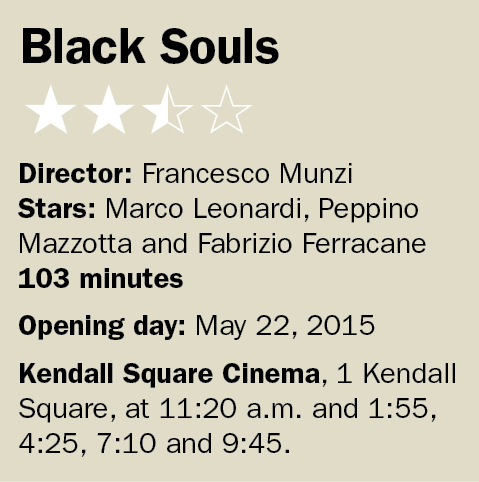 Small doings carry big ramifications, and quickly Luigi and Rocco, looking to buy influence – 30 keys of coke will do that – and expand, find themselves in the middle of a potential turf war with Leo square in the middle as the agitator between Luigi’s cosmopolitan go-for-broke flair and Rocco’s staid, more conservative approach. It’s easy to see why Leo gravitates toward Luigi’s playboy as opposed to Rocco, who married, has a daughter and, at the root of it all, shares the same conservative sensibilities as Luciano.

As director Francesco Munzi’s weave has it, all parties wind up back at the old family farm, where past meets present and generational sensibilities collide as dark dealings loom at the corners. Much of what transpires feel leaden and reminiscent of “The Godfather” scenes on Italian soil: quiet and purposeful, and steeped in tradition and the unwritten code of the underworld.

There are several junctures where “Black Souls,” for all its somber drive, appears to move in predictable and clichéd directions, but Munzi and his writers – working from Gioacchino Criaco’s novel – smartly never quite go there. The developments add up to something new, unexpected and ominous, though not fully sating. Much of Munzi’s vision hangs on his four principals and on cinematographer Viadan Radovic. Most is asked of Ferracane, whose Luciano becomes the tortured Job of the mountain.

In large, he and the cast all deliver. But Munzi hangs on the emotional residue of a scene far too long, so much so that the magic he and his actors have conjured up begins to settle, and the poignant flourish suddenly becomes stale. There’s no denying Munzi’s hypnotic poetry and simmering macho cadence, but for all its bleakness, “Black Souls” could have been a gangbuster with a touch more soul.