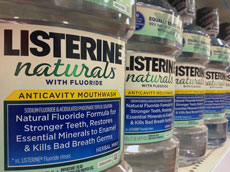 There have been questions about how much fluoride to add to drinking water as rinses, toothpaste and other sources of the chemical have become routine. (Photo: Mike Mozart)

Health officials are urging less cavity-fighting fluoride in city water, in line with new federal recommendations. The advisory body of the city’s Public Health Department, which has authority to order the change, put off a vote Wednesday because only one voting member showed up, not enough for a decision.

Claude Alix-Jacob, chief public health officer, said the recommendation will be reintroduced at a meeting next month of the public health subcommittee of the Cambridge Health Alliance. The subcommittee advises the Public Health Department.

The issue of fluoridation, undebated in Cambridge since the 1970s, arose after anti-fluoridation activists persuaded city councillor Nadeem Mazen to ask for a review of the policy last July. In early February, the Public Health Department sponsored a contentious but peaceful public forum at which several people in the audience challenged the pro-fluoridation panel of experts. Then health officials were to come up with a recommendation.

Research shows overwhelmingly that fluoride in the public water supply prevents tooth decay, particularly among children. But there have been questions about how much to add, especially as fluoride rinses, toothpaste and other sources of the chemical have become routine since water systems began fluoridating about 70 years ago.

The federal standard has been a target of 0.7 to 1.2 parts per million, under the assumption that people in warm climates drink more water and need less fluoride added, while residents in cold areas drink less water and need more in their supply.

That turned out to be wrong – people everywhere in the United States drink about the same amount of water, scientists at the U.S. Centers for Disease Control and Prevention announced four years ago. The CDC also cited research showing a rise in the number of children and teenagers with signs of very mild or mild fluoride overexposure.

The agency proposed then to reduce the standard to a single level: 0.7 parts per million. It did not make the policy official until late last month. State Health Commissioner Monica Bharel sent the recommendation to community boards of health and health departments across the state on April 28, a day after the standard was announced. And now the city may soon reduce its fluoride level, currently pegged at an average of 1.2 parts per million.

The lower limit, if adopted, will mean changes at the city Water Department. In recent years the level never dipped below 0.8 parts per million and was as high as 1.3 ppm.

Health officials had been taken by surprise by Mazen’s request for a review, which came “in the quiet days of midsummer,” environmental health director Sam Lipson said at Wednesday’s meeting. Lipson also said it had been difficult to come up with a balanced panel of experts for the February forum because those with a “nuanced” view of the issue declined to participate.

As a result, he said, the discussion at the forum involved people who were “really dug in on one side or the other.” Still, he said, “we had a good, balanced set of comments.” And it was easier to recommend reducing the fluoride level to 0.7 parts per million in Cambridge after federal and state health officials signed on to the new standard, Lipson said.

The only voting member of the subcommittee who attended the Wednesday meeting was Deborah Klein Walker, the chairwoman and a former associate state public health commissioner. Cambridge Health Alliance Chief Executive Patrick Wardell also attended, but is not a voting member.

The other two subcommittee members are youth training worker Moacir Barbosa and Paula Paris, administrator at a nonprofit career development group. No reason was given for their absence.