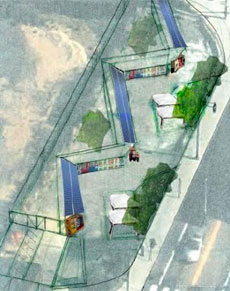 A vending machine marketplace called Kite Day Happy Full was envisioned for a small lot in Kendall Square by a Somerville consultant to the Cambridge Redevelopment Authority. (Image: Relish Management)

The shipping container marketplace envisioned for a small construction lot in Kendall Square never came to be, and the space may yet be reworked into a gathering place for food trucks to serve workers in the square’s innovation industries.

For a while, though, the Cambridge Redevelopment Authority considered a use for the space just as funky as modifying shipping containers to be small storefronts: a vending machine marketplace.

Somerville consultant Relish Management suggested the vending machine concept and gave it the placeholder name Kite Day Happy Full – a “combination of words that doesn’t work logically but resonates emotionally” to communicate “a joyful experience” and nods to the concept’s inspiration in Japan, where sophisticated vending machines dispense far more varied items (some rumored to be unsavory) than the candy bars and chips typical in America.

As Relish saw it, Kite Day Happy Full would take over a cleaned-up 5,900-square-foot construction staging site at Binney and Third streets, by the federal John A. Volpe National Transportation Systems Center, with a zig-zag of colorful, sheltered vending machines dispensing farm-fresh foods including produce, eggs and meat, locally made specialty foods such as ice cream or fruit salad, packaged foods and clothing, makeup, toys and electronics. Other machines would be creative and artistic, such as the poem- and zine-vending machines created by local artist and barista Shayna Curran, or dispense secondhand items and used books.

“This proposal gives the area a fun destination for people to come to Kendall Square. This is an innovative idea on an old concept which feeds into the reputation Kendall Square has,” according to minutes from the authority’s Dec. 17 meeting. As the Relish presentation showed, the idea also served a variety of needs – feeding workers, providing groceries to residents, making Kendall warmer, more welcoming and people-oriented and supporting local businesses. 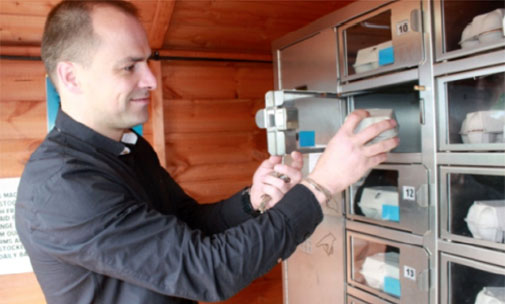 Vending machines used for many purposes – including selling farm-fresh eggs – were proposed for Parcel 6 in Kendall Square. (Photo: Relish Management)

The concept seemed even to address the limitations of the small space, called Parcel 6, which is at a decentralized location with electricity but limited options for water and no bathroom facilities or other ways to dispose of sewage. The parcel is also available for an estimated three to five years before becoming part of larger construction at the Volpe site.

The short-term nature of Parcel 6 had already worked against the shipping container concept, said Tom Evans, executive director of the authority.

“We have been unable to find any vendors to operate within the short duration we were looking for without a significant operating subsidy, given the upfront capital cost” of modifying and moving the containers, Evans said. “We have also learned that the shipping container structures don’t necessary cost less to build.”

But the same problems affected the vending machine marketplace. Even with enlivening the site a higher priority than whatever money it might bring in, “it might take time to find funding sources,” Evans said in meeting minutes, and “there is a significant infrastructure investment upfront – electricity supply, place-making and landscaping – that will not be recouped through sales.”

“It was intriguing,” Evans said of the vending machine concept, but it “was not seen by the CRA board as meeting the goals for activating the parcel.”

That brings the authority back to getting food trucks onto the site, which calls for running water.

The authority hoped to have the shipping container marketplace operating as soon as August 2014, but Evans said a food truck court would take at least a few months to get running.

“We do not have a timeframe yet … I am just now setting up meetings with some of the local restaurants to get their feedback and concerns. Additionally we need to circle back around with a number of city departments about permitting,” he said. “I would love to have something there this fall.”

But that assumes Newport Construction, which is using the site for staging, has made enough progress on its work on Main Street reconstruction that it can vacate and clean the site, he said.

The company is required to resurface the site when it leaves, and Evans said he hoped to see a paved area for trucks and some park features for people visiting and eating there.