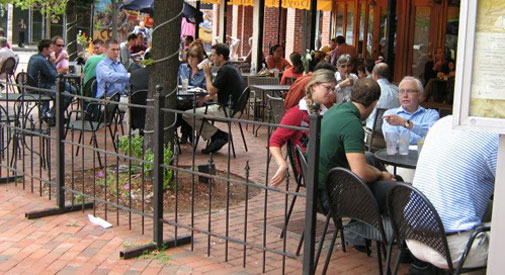 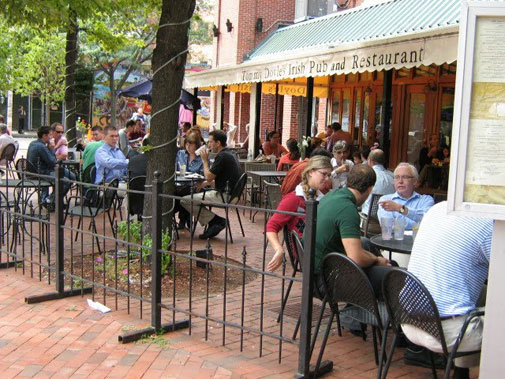 Some of the patio space at the closed Tommy Doyle’s in Kendall Square will become enclosed dining space for the expected Smoke Shop barbecue restaurant.

Barbecue lovers should have a destination in Kendall Square in December, as Andy Husbands and Brian Lesser prepare their Smoke Shop barbecue restaurant to replace the Tommy Doyle’s Irish restaurant that closed in September 2014.

The barbecue venture has been long rumored, but in a presentation last week to the License Commission the duo sketched out what was coming to the 1 Kendall Square space – including a significant amount of construction that includes “everything from new electric to a buildout” reconfiguring the interior (Lesser called the Tommy Doyle’s layout “a little too disconnected”) and adding space by enclosing some patio seating. Forty seasonal patio seats will remain.

The construction includes an area just for people picking up takeout food, as well as a new kitchen with state-of-the-art equipment, Lesser said. While the landlord has been doing some work already, Lesser described construction as tentatively beginning in August and a Smoke Shop opening “prior to the end of the year.”

Along with more traditional barbecue selections, a preliminary menu offers The Whole Hog, a meal of an entire pig that serves 10 with “all the accompaniments” that will be limited to one order per night; “pig candy”; bar food that include a catfish slider with kimchi and wasabi aioli; appetizers including pickled August peaches with the pig candy and red jalapeños; and sides that include mushroom macaroni and cheese, Buffalo’d Mash Po Fried Chicken Bits and Blue, and a “grouping of tiny biscuits.”

Smoke Shop was approved by the commission June 16 for a capacity of 149 indoor seats and 31 people standing, and the 40 patio seats to be rolled out in the summer of 2016.

This post was updated June 24, 2015, to correct the name of the restaurant.