‘The Overnight’: Couples with kids get kinky when the night turns dark (and vice versa) 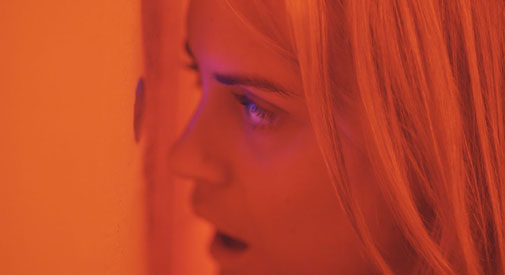 ‘The Overnight’: Couples with kids get kinky when the night turns dark (and vice versa)

“The Overnight” is one of those on-the-clock, dark comedies driven by melodrama and sexually charged situations. You’ve been there before with Edward Zwick’s Chicago-based “About Last Night” and Martin Scorsese’s late-night SoHo carouse, “After Hours.” “The Overnight” lopes in as the indie, L.A. version, chock full of sexcapades and with two preschoolers thrown in for good measure – thus the film’s title. 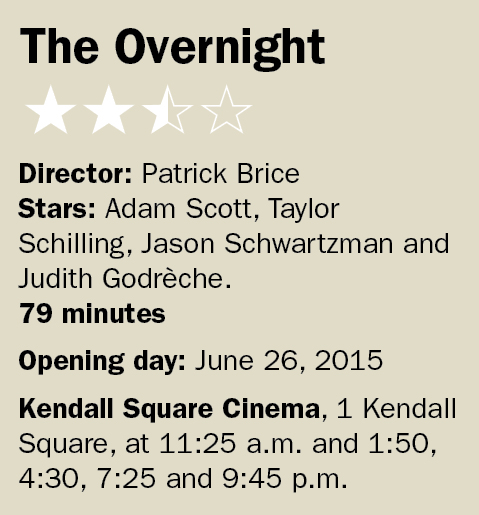 The backbone to writer-director Patrick Brice’s late-nighter, however, isn’t rom-com relationship hell or a data entry wonk’s midnight sojourn into madness, but 30-something ennui and the notion that the grass may be greener, juicier and more inviting in the boudoir of someone else’s castle. Meet Alex (Adam Scott) and Emily (Taylor Schilling) a pair of young urbanites recently transplanted to Silver Lake from Seattle. Alex still sports a grunge goatee and is a stay-at-home dad, while Emily does something techie that fetches enough dinero to live in a nice, somewhat swank neighborhood. And nice is absolutely the perfect word, as Alex and Emily are boringly nice, socially awkward and a bit stiff.

Even behind closed doors while having sex, there’s awkward circuitous banter (think of Richard Linklater doing softcore). “Go in bigger circles,” Emily instructs, but neither can finish, so they separate and move to manual self-fulfillment, each, hand busily thrashing away under the sheets, checking in with the other to see if they’ve come yet. It’s a gag that’s doesn’t quite work, so it’s a relief when the couple’s 4-ish-year-old son RJ (R.J. Hermes) rushes in and asks about the weird smell. It’s a slight, wry moment that becomes the cornerstone of Brice’s portrait of marriage: small embarrassing truths that, depending on how the couple navigates them, can make or break their bond.

Being as dynamic as they are, Alex and Emily don’t have much of a social life – until one day at the local park, RJ hooks up with Max (Max Moritt), whose dad, Kurt (Jason Schwartzman), looking très Amish hipster, offers his view on playgrounds, oyster bars and bodyworks. During such innocuous banter, we get that, like their parents, the boys don’t intermingle with others so well, and since the toddler bromance is such a rare find, a pizza-night play-date plan is hatched. It ultimately turns into the event of the title – not by design, mind you, but because of wine, waggling weenies and a bodacious bong.

Things begin cordially enough, but after the table is cleared and the boys are put to bed the two curious couples begin to sniff each other out in the vast roominess of Kurt’s lavish mini-manse, an adobe glove wrapped around a luminously inviting swimming pool. As pairings merge, split and meander throughout the sprawling complex, we learn that Kurt is an abstract artist deeply inspired by the human sphincter and that his lovely French wife Charlotte (Judith Godrèche) is an actress of sorts. A show of a recent film clip gives Alex a very public hard-on, and that’s where that bong and the pool step in and take center stage. Kurt decides all should go skinny dipping, revealing to all what Alex describes as a “horse cock.” The bobbling phallic (a “Boogie Nights”-styled prosthetic, I’m guessing) gets ample camera time, especially in the pool where it gains the optic notoriety of a shark fin.

Kurt’s prowess (and free spirit) stokes Alex’s insecurities (he’s not so well-endowed) while Emily plays it straight, mouth agape and eyes rolled as things slowly but inevitably move toward swing-town. Along the way there’s a tawdry, voyeuristic stop during a packie run, a sword-flapping dick dance, water filters and relationship reveals that produce questions of long-term viability. Bur Brice’s “Overnight” never pushes inward far enough. The issues of aging together are little more than props (like the two boys) to push the two couples toward bed in whatever configuration might titillate most.

The great asset at Brice’s disposal is his cast, mainly Schwartzman, who may be ever slack and enigmatic, but also always soulful. He makes Kurt real, sensitive and caring while an eccentric kook at the same time.The alterno-nouveau-riche bond with Charlotte is hugely palpable, as is the burgeoning buddying and then some with Alex. Godrèche gets the least screen time but proves edgily adroit in scenes of dark comedy-cum-eros. Scott and Schilling are likable enough as the blander couple, but are largely shortchanged by Brice’s script. Their small-screen personas in “Parks and Recreation” and “Orange is the New Black” better showcase their capabilities. Brice, who made the horror-comedy “Creep,” still seems to be finding his voice. “The Overnight” is a more mainstream effort propelled by an array of situations that, while funny at the onset, can turn instantly cutting and deep. It’s at these fissures (and at the finale at the end of the night) that Brice brings us to the precipice, only to pull back.