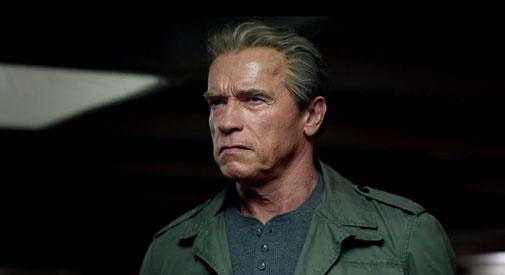 “I’m old, but not obsolete,” is the new Arnold Schwarzenegger zinger in the “Terminator” franchise reboot, “Terminator Genisys.” “I’ll be back” gets recycled too, and there’s plenty of logic for the aged Schwarzenegger terminator – now affectionately called “Pops” – being gray and wrinkled (his external covering goes like ours). He even gets to confront the young, buff, naked Arnold, so sleek and intimidating as the lethal T-800 prototype back in 1984. 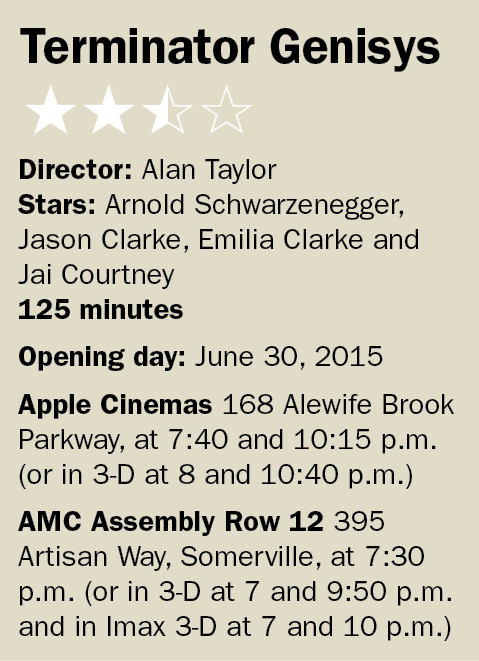 Much of what propels “Genisys” lies in the basis for James Cameron’s game-changing B-film some 30 years ago: the notion of rewinding the clock and altering history and destiny. Wrinkles upon wrinkle in time have changed the game so much you almost can’t tell where rebel leader John Connor (Jason Clarke, with a scar-marred face) ends and Skynet begins.

The ever-churning plot machinations are wild, but don’t offer much bite. Sarah Connor (Emilia Clarke from “Game of Thrones” – the second actress from the series to play Sarah Connor, as Lena Headey starred in the 2008 series “Terminator: The Sarah Connor Chronicles”) is still on the hit list, but knowledge from the future has worked its way back in time, so what was a pat scenario in previous chapters becomes a game of time-hopping chess, with Skynet and the humans trying to out-wrinkle the other.

Not to give too much away, but we begin in the future with the young Arnold T-800 (a killer computer recreation) landing in L.A., exactly like in the ’84 original – but just as he’s about to steal the clothes from a trio of punks, things go off-script from what had been. The year of  Judgement Day (1997) has been pushed to 2017 as well. Why? Well, Skynet has decided the best way to rule the world isn’t an apocalyptic nuclear strike, but a Trojan horse computer virus through the highly sought new operating system Genisys – from a company that’s Apple cool and Microsoft hungry. There’s much more to it too; Oscar-winner J. K. Simmons (“Whiplash”) plays a cop in L.A. and again in San Fran in 2017. He’s a bit of a boozer, so no one really buys it when he says he’s seen time traveler Kyle Reese (played by the handsome but wooden Jai Courtney) and Sarah before.

At times the special FX are so special you feel like you’re watching a really well-rendered video game that borders on the real. Director Alan Taylor, who’s done mostly TV (“Mad Men,” “Lost” and, wait for it, “Game of Thrones”), doesn’t seem to know how to elicit nuance from his performers unless Schwarzenegger is in the middle of the scene. But most blame falls to an inert script (you can almost see the screenwriters high-fiving as they string together cool scenarios and totally lapse on character development) and the fact Clarke and Courtney are woefully JV compared with Linda Hamilton and Michael Biehn.

In the mix, the old liquid T-1000 terminator (Korean star Byung-hun Lee) gets in on the human extermination work too, and there is a terminator upgrade to boot. But overall this genesis needed a little more incubation in the lab of its creator before going online. (Or “before going live.”) It’s on par with the last two efforts, but in no way does it complement the “Originator’ or “T2: Judgement Day.”