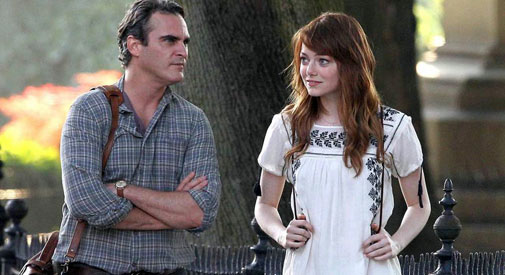 “Irrational Man,” the new movie from Woody Allen, is a hodgepodge of parts held together by an enigmatic protagonist – a swaggering nihilist who teaches philosophy and, despite a flabby, alcoholic paunch, invites much favor from attached women, even though he can’t get it up – and a finely nuanced performance by Joaquin Phoenix taking on that role. Phoenix’s Abe arrives to a small New England liberal arts institution (filmed in Rhode Island), where there is as much dread over Abe’s debauchery as there is awe over his revered mind and that one big book he published that made him a philosophical rock star. 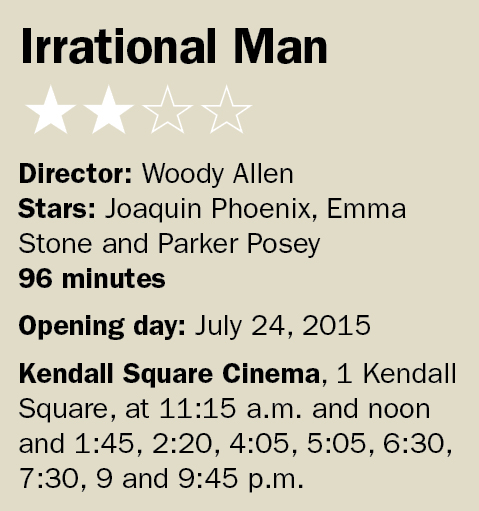 Abe gets himself into a love triangle faster than he can down a shot of bourbon or spout a lazy line about “mental masturbation.” On the faculty side he’s got Rita (Parker Posey, digging into the role nicely), semi-unhappily married and dreaming of wine and roses and dirty sex with a kindred miserable spirit. Rita’s counterbalanced by the fawnish Jill (Allen’s muse du jour, Emma Stone, so good in “Birdman” and proving that inclination correct here), a student with a jockish beau. Things go from mentor-student banter to inappropriate friendship even with clothes on. Abe, in all his louche self-loathing, has become the black hole of the campus. But then, near the nadir of his pontificating wretchedness, he finds an up.

Allen has been making movies for almost 50 years. The sardonic joys of “Manhattan,” “Annie Hall” and “Hannah and her Sisters” radiates across the decades, the self-deprecating nebbish new and relevant again in every generation. There’s no doubt to his genius, but recent years have seen change-ups in his works, some too hauntingly self-reflective or suggestive of refutations of public opinion of his media circus life behind closed doors (“Husbands and Wives”) and forays into Hitchcock (“Match Point”). His last truly great film was “Crimes and Misdemeanors” (before the whole fallout with longtime partner Mia Farrow), and while there have been flourishes of the unique and the old Woody (“Vicky Cristina Barcelona” and “Blue Jasmine”) there’s almost always a two off that seem unformed, and that the old Woody wouldn’t have done or developed more to a point. No matter – his output of a film a year is nothing less than impressive.

“Irrational Man” fuses the old quirky Allen – with sharp characters ensnared in the mundane and struggling to get out – with his more current predilection for Hitchcockian dabbling. It almost works, but in the denouement, stumbles (irrationally) and falls down the shaft of the absurd. If you don’t see it coming, it’s not because you weren’t paying attention, but because you were.