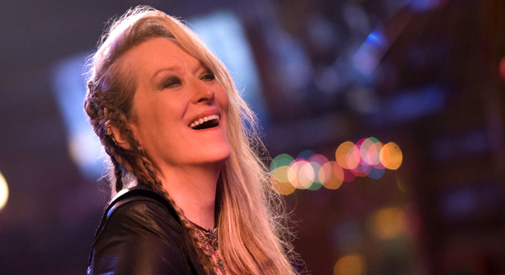 How much fun is “Ricki and the Flash”? It’s got a little bit of everything – sentimental schmaltz, family healing, trauma, small victories and a whole host of social skewering both on the subtle and not-so-subtle side, all punctuated or punctured as may be by paradox and flip sides (including a feminist-postured mom who voted for Bush twice). The film too is a film of two halves – generally not a good thing – but the man behind the lens, Jonathan Demme, has gone big (“Silence of the Lambs” and “Philadelphia”), gone small (“Melvin and Howard”) and done the rock thing (“Stop Making Sense,” one of the top rock docs of all time) and has always been a master craftsman, always focusing on the human condition and character development. He knows how to connect with  his material and his audience, and the pairing with screenwriter Diablo Cody makes real sense, as the film is a clash of ideals within a familial unit, something she tackled and won much acclaim for with “Juno.” 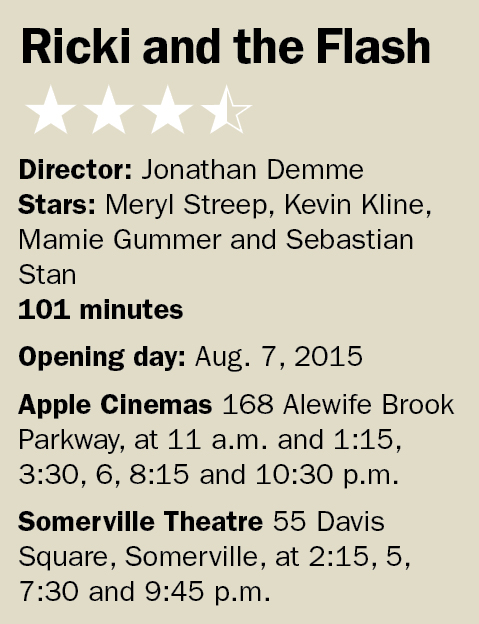 In a bold turn, Meryl Streep plays the Ricki of the film’s title, a middle-aged woman with half dreads and jingle-jangle jewelry since long ago leaving her family in middle America to become a rock star in California. She didn’t, mind you; she plays as the lead of a house band in a local roadhouse dive playing covers of classics and newer stuff such as Lady Gaga and Pink to draw in the younger set. By day she works at Total Foods, where she is reminded constantly to smile for the customers who have shopping bills bigger than her weekly salary (yes, it’s a dig on Whole Foods) and she’s just filed for Chapter 11.

The film gets lift when Ricki’s ex, Pete (Kevin Kline, in his third pairing with Streep) calls and requests her help – their daughter Julie (Mamie Gummer, in a breakout performance) is depressed after going through a divorce and Maureen (Audra McDonald), Pete’s wife who raised the kids and is no fan of Ricki, is in Seattle dealing with a an ailing pop. There’s a lot of resentment toward Ricki, but there’s nothing like a stash of weed and a chance encounter with Julie’s ex and his new love interest to get things moving toward reconciliation. The razor-sharp, wily dialogue by Diablo Cody and crisp execution by the performers bring this to life with a genuine palatability that in the hands of anyone lesser would drift into the realm of hyperbolic insincerity.

And that’s just the first half of the film. Ricki also comes to terms with Greg (1980s pop icon Rick Springfield, having aged well), her guitarist and lover she won’t let into her heart, and there’s lots of music. Demme, with his roots, shoots it all with great choreography and immaculate editing, and the Flash is an assemblage of musicians with credits including Talking Heads, Neil Young and P-Funk. Sadly, bassist Rick Rosas (who played with Young), recently passed.

The film swings around again to end on something more festive – you could call it “A Divorce, a Roadhouse and a Wedding” – and moves into territory that feels wonderfully akin to Demme’s 2008 gem “Rachel Getting Married,” but far less dark. There’s an overall lightness to “Ricki,” and Demme does a great job maintaining it, and also at reining it in. The whole cast hits all the notes, especially Streep; just three years ago she won an Oscar for playing Margaret Thatcher, and now she’s playing a conflicted, rocked-out mom and will likely see a 20th nod come her way.