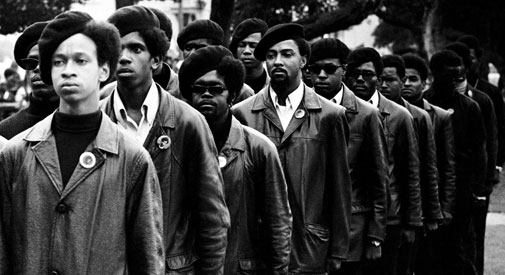 In two very different films opening this week, much is asked of society. In one, “The Black Panthers: Vanguard of the Revolution,” a documentary about the black activist group going to extremes to illustrate the plight of blacks in post-civil rights America, equality, fairness and a place at the table are demanded with shotgun bravado and mod hipness; in the other, a sleepy slacker tale, “7 Chinese Brothers,” Larry (Jason Schwartzman), the central protagonist, would like to drink and do drugs and not have to worry about money or work. 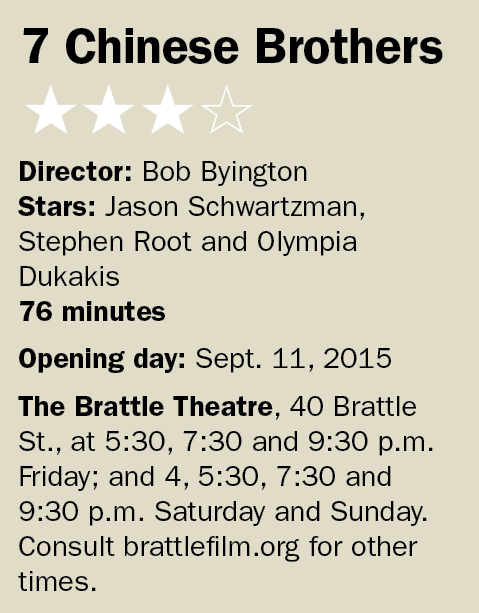 Larry’s not a bad guy, he’s got an inert French Bulldog with the greatest facial expressions and he looks after his ailing nana (Olympia Dukakis ) who’s in a nursing home, but he does get fired from his waiting job for stealing booze – and keys a coworker’s car on the way out. Around the corner at the same shopping mall complex, Larry quickly lands a job at a Quick Lube oil change shop, where her enjoys the discipline of assembly line work (he vacuums out the cars and has to pay a loose-money finders fee to the lube monkeys higher up the food chain) and falls for his new boss Lupe (Eleanore Pienta).

Not much really happens in “7 Chinese Brothers,” written and directed by Bob Byington. The muscular guy who got his car keyed (Jonathan Togo) looms, as does Lupe’s quick-tempered ex (Jimmy Gonzales), but the real stake through Larry’s world is Major (Tunde Adebimpe), the caregiver who looks after Larry’s nana, supplies him with pills and has a killer way with the ladies – including Lupe – and is the closest thing Larry has to a has to a human friend.

Schwartzman is so good in this self-hating, passive-aggressive role – something he did earlier this year with “The Overnight” and in last year’s fictitious spin on the life of novelist Philip Roth, “Listen Up Phillip” (that film’s director, Alex Ross Perry, has a small role in the movie) – that he manages to make the flawed and self-centered Larry sympathetic even as sails impassively through the wreckage of his own doing.

It’s a small film, with some great performances and one irrefutably cute dog.

The director will appear in person for a Q+A at the 7:30 p.m. shows Friday and Saturday at The Brattle Theatre, 40 Brattle St., Harvard Square.

Stanley Nelson’s depiction of the iconic Panthers is a freeform elegiac encapsulation of a potent period in American history in the ’60s and ’70s chronicling the rise and fall of the radical reform group. It’s also a fairly one-sided affair. Providing most of the commentary are former Black Panther Party members who formed the second line behind Huey P. Newton, Bobby Seale and Eldridge Cleaver, the charismatic leaders of the so called revolution to bring focus to the notion that black lives matter and to the racially motivated profiling tendencies of police – something that remains all too true today. Their solution was to dress in militia mod (leather jacket and a beret), pack conspicuously and be on the scene of any civil unrest in the community, especially if the police were involved. Newton had read the gun laws and made sure the Panthers complied with the regs emphatically. Several Oakland police officers pop up on screen as talking heads to testify to the intimidating effectiveness of the tactic of showing up in armed masses. 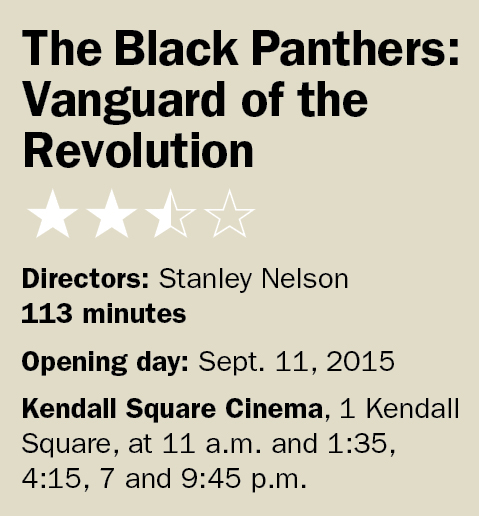 The movement spread to Los Angeles and New York and urban areas in between, but even in the galvanizing infectious commonality of color, class and struggle there was a clear strain in the end. Cleaver became the articulate and incendiary voice of the Panthers, challenging Gov. Ronald Reagan on air to a fight (he would later vote for Reagan for president), and Newton would be jailed for shooting and killing a police officer. For all the momentum the party had, it was susceptible to the ids of its leaders, ostensibly tainted by power. Cleaver and Newton would split after Newton was acquitted in the early ’70s. Cleaver, lobbing polemics from Algeria, would call out Newton for being weak for setting up social services and food banks for the poor. Newton himself would shortly thereafter undercut his social good and near mythical status by descending into a darkness of drugs and violence, becoming more a bane than a blessing in the end. Seale, always the middle keel, would run for mayor of Oakland and launch a highly successful voter registration program. He’s the only one of the three still alive, and it’s too bad (and curious) that Nelson didn’t get him on camera.

As is, the cast of Panthers, mostly the men, tell it like it was from the street-banging level (the recollections of the Panther Party den raid in L.A. and a several-hour siege is told with trigger-gripping aplomb), while the women are more introspective and clearly restrained by the times and their gender. A few historians also check in to provide anecdotes supporting the testimonials for the former Panthers. In the end, “Vanguard” becomes more of a nostalgic ode than a plumbing of history. That doesn’t make it ineffectual, just a pop of passion – raw and nervy, just like its subject.

The director will be present for Q&As after the 4:15 and 7 p.m. Saturday and 1:35 p.m. Sunday shows at the Landmark Kendall Square Cinema, 355 Binney St., Kendall Square.