‘Pawn Sacrifice’: Film finds Bobby Fischer, watches him lose himself off chess board 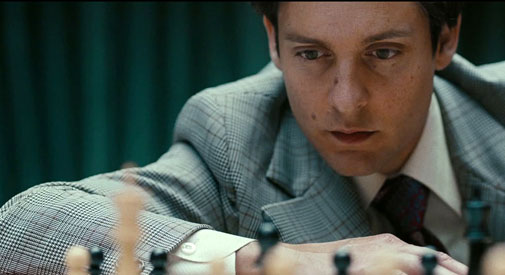 ‘Pawn Sacrifice’: Film finds Bobby Fischer, watches him lose himself off chess board

The name Bobby Fischer might trigger a Google search for some of Internet age who haven’t at least dabbled in chess. For those who recollect the epic clashes of the ’70s – Ali vs. Frazier and the U.S. and USSR ensconced in the heat of the Cold War – Fischer was likewise a player on the international stage of conflict. His arena, while smaller and with less prospect of bloodshed, was no less tumultuous. It plastered the chess prodigy across as many magazine covers as the two well-matched pugilists and had a profound impact on cultural and ideological sparring between old Uncle Sam and the Kremlin. 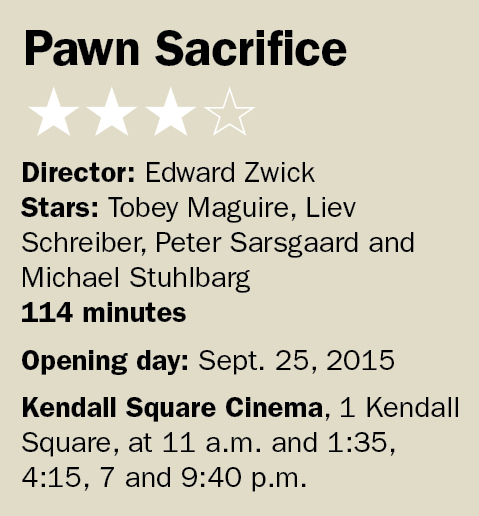 For those in need a history refresher or hoping to get more than a Wikipedia regurgitation of the facts, even-keeled director Ed Zwick (“Glory” and “The Last Samurai”) has saved them the trouble, putting the mercurial genius’ contribution to the game and global politics in context, as well as his struggle with mental illness. It’s that latter facet that gains our hearts.

Fischer grew up a poor Jewish kid from Brooklyn, but by the time he was a preteen he was on the national stage. Even then, his talent glaringly obvious, he was an arrogant prick with clinical signs of delusions. As the movie has it in one early scene, he demands that his mother banish her boyfriend because the soft coos from their infrequent sex disrupts his practice in their small apartment.

Later, as a young man in the late ’60s, Fischer – now played by the boyish Tobey Maguire, with prosthetic facial blemishes to make him look less wholesome and handsome – would become the American champ, take on the Russians and get drubbed. When his claim that the Russians teamed up and stacked the deck against him went largely unheard, he told the press he quit the game. That’s where Zwick’s film takes off, transitioning from a per-usual, plodding biopic into something more reflective and refreshing.

Much of the middle of the film, after Fischer is coaxed back onto the circuit, centers on the pursuit of Boris Spassky (Liev Schreiber, nailing the Russian speak), the No. 1 chess player on the planet. Politically, the match carried more weight than a scad of ICBM silos locked on to Washington. It’s a David and Goliath pitting, with Fischer being his own worst enemy, yet even after early defeats he remains ever demanding (requesting ridiculous conditions for the match – money and anything else that might cause cancellation), patronizing and resilient. He also descends into a Cold War-fueled paranoia, thinking the Russians are trying to tap his phones and mess with his head. Peter Sarsgaard adds a nice stabilizing touch as Father Bill Lombardy, the voice of reason in Fischer’s ear and one of the last Americans to ever beat Bobby.

As Fischer, Maguire delivers a heartfelt yet aptly mercurial performance that carries the film – that is, once one gets past the lazy drawl of his Jewish Brooklynese. You can tell Maguire prepared for this role tirelessly, but he feels a tad miscast, and it’s an unfortunate distraction. Beyond that, Zwick gets the zeitgeist and period sets down with seamless credibility and does a nice job maintaining the tension and intrigue throughout the array of chess matches. It’s no small feat to make such a cerebral thing engaging over time for a visual audience, but Zwick turns that corner nicely, mostly letting the nuance of Maguire’s twitching eyes do the heavy lifting.

In historical terms, Fischer was something of a one-hit wonder, the “Rocky” of the chessboard, later a homeless persona non grata. Shortly after his meteoric rise, his illnesses consumed him. Zwick, completing the arc, remains respectful of Fischer and his legacy, but also checks the record. It’s a bittersweet depiction, a transcendent Horatio Alger tale entwined in a Greek tragedy. Check.