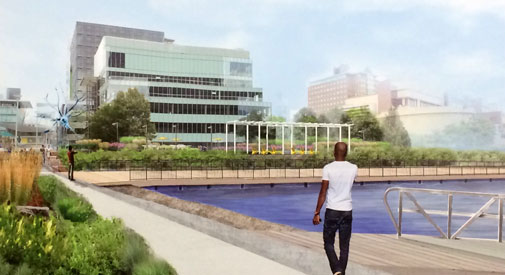 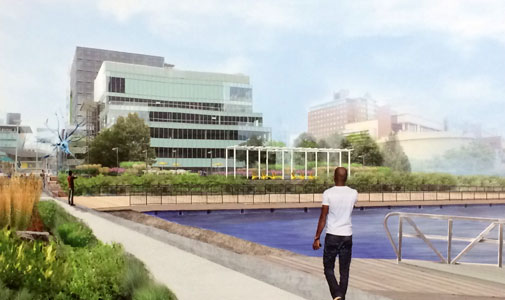 The restaurant Launch is to open in the ground floor space facing Broad Canal in Kendall Square. (Image: The Briar Group)

Launch isn’t named after the rented kayaks that will hit the waters of the Broad Canal as part of the restaurant’s view.

Rather, the 240-seat restaurant (110 of those seats are on a seasonal patio) that won approval and a new all-alcohol license last week from the License Commission has a bigger mission than enjoying the view of Kendall Square greenery and the canal just beyond it: activating space for the businesses, conferences and venture capital high rollers that have helped make the area a center for high-tech innovation and among the state’s prime economic engines. 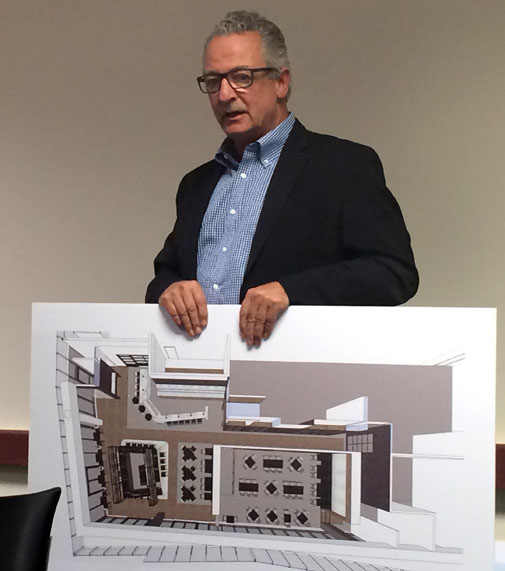 Tom Shea, of The Briar Group, shows a rendering of the interior of Launch, including its flexible meeting space. (Photo: Marc Levy)

The lease signed Oct. 20 before meeting with the commission showed how the landlord – the Cambridge Innovation Center innovation incubator – “sees this as a way to take care of the population in the building, but also invigorate, if you will, the lawn area, which is undergoing some renovations and things of that nature – to better populate it and make it a better public meeting space,” said attorney Dennis Quilty, of McDermott, Quilty & Miller, representing Launch restaurateurs The Briar Group.

That means setting aside flexible space that could hold anything from yoga classes to a biomed business meeting or presentation while the traditional restaurant business goes on around it, said Tom Shea, director of operations and a new general manager for The Briar Group.

When there isn’t a business or nonprofit use needed for that space, it can hold diners as well – but “they didn’t want it to be a dead, dull space … our intention is to activate it for events,” Shea said, “not unlike what the CIC does with its Venture Cafe. Our job is to try to create those kinds of events that match people together and lets them interact in a nontraditional setting.”

The lease at 450 Kendall St. actually requires creative use of the space for the Kendall Square community, said Shea, explaining that while they might look over-served now, the CIC and Briar Group are looking at a population one or two years in the future.

Founded in 1989, The Briar Group has been more traditionally associated with in hotel restaurants, such as Sólás, City Table and City Bar at the Lenox in Boston (other Briar Group properties include The Green Briar, O’Connor’s, Anthem, Ned Devine’s and The Harp) but it opened Gather and Brew in the Cambridge Innovation Center building in Boston’s Innovation District in 2013.

“We were brought to this site by the Cambridge Innovations Center after we successfully opened Gather,” Shea said.

The group presented the commission with a “conceptual menu” without prices, urging the members to keep in mind its preliminary nature. It showed a heavy tilt toward seafood, including raw bar fare such as Smoked Bluefish Pâté with crostini and a “Seacuterie Board” of tuna crudo, the pâté, a daily special, grilled bread and accoutrement; small, large and jumbo Shellfish Towers with lobster tail, local and Dutch Harbor crab, ceviche, oysters, littlenecks and shrimp with an assortment of dipping sauces; appetizers such as Charred Octopus; entrees such as a Lobster Pot Pie with sweet potato, grilled corn, pearl onions and buttered puff pastry, and Scottish Sea Trout with barigoule (typically an artichoke stew), herb vinaigrette and cayenne polenta; and sandwiches such as a Cod Po’Boy and “Massive Lobster Roll.”

There may be brunch on the weekends, The Briar Group representatives said. Its business plan isn’t final, but they asked for a common victualler license specifying the hours of 7 a.m. to 1 a.m. seven days a week, with alcohol offered from 11 a.m. onward.

The commission also heard from Aramark Educational Services, which plans to reopen Kendall Square’s Coop food court Nov. 9 after a two-year shutdown for construction. The food court hours will be 7 a.m. to 7 p.m. Mondays through Saturdays, manager Iain Crooks said. The eateries inside are down to three – Einstein Brothers Bagels, Panda Express Chinese and one run by Aramark itself – from five, serving 110 inside seats and 52 seasonal patio seats.