Initiatives helping small business to roll out in new year, just as Stellabella closes a store 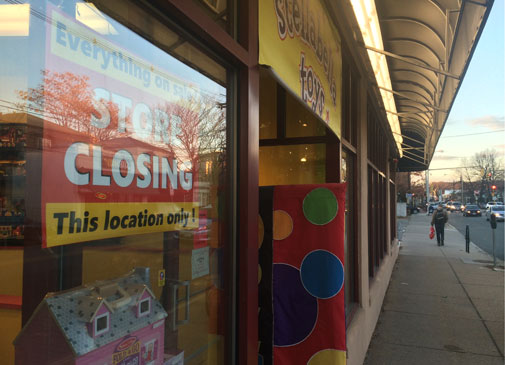 Initiatives helping small business to roll out in new year, just as Stellabella closes a store

Stellabella Toys is closing its Davis Square branch, with owner Richard Henry looking at causes as simple as lower foot traffic and as complex as the effect of online giants such as Amazon changing the nature of retail itself.

The store, on the outskirts of Cambridge at 196 Elm St., is to be closed by mid-January, leaving an Inman Square store at 1360 Cambridge St. and sites in Burlington and Dedham. On the bright side, Henry said Tuesday, “This is the best time to close a toy store. The natural [holiday shopping] traffic plus the discounted prices should ensure we can clear out and still actually make a small profit on the closing.”

People who stop by to help close the Davis store will get a one-time discount coupon to be used at the Inman “mothership,” Henry said, where, “if anything, we hope to be able to invest in a bit more inventory … in the event Davis/Porter customers have never been to Inman, we want to give them an incentive to check us out.”

The store had a thriving Porter Square location until July 2012, when the impending demolition of its host building forced Henry to look for another site in the neighborhood. “We thought the Elm Street location would be viable. It hasn’t worked out that way,” Henry said. “Just not enough traffic.”

But behind that deficiency is a decline in bricks-and-mortar shopping being felt by sellers of small goods everywhere, he suggested, as Amazon employs “predatory pricing and now same-day service” that makes neighborhood shops irrelevant to many customers – including one former customer who asked to be taken off the Stellabella mailing list because he’d become exclusively an online shopper.

That’s a bitter pill for local business owners such as Henry – who notes shops such as his “support the community, we pay taxes, we employ high school kids; Amazon does none of that” – and exactly the challenge facing the Cambridge Local First organization since its founding in 2005, despite municipal efforts such as enforcing a certain amount of ground-floor retail be built into large construction, or councillor Leland Cheung’s efforts to limit how much retail frontage banks can claim on a city block.

Carrissa Blackburn, executive director of Cambridge Local First, said the coalition has been working with the city and incoming City Council on initiatives that can help small businesses such as Stellabella handle online challenges. (Among the most important changes would be instituting a tax that will put sales at online and bricks-and-mortar stores on a more level basis, but that can’t be done municipally, she said.)

“Cambridge is actually a leader on many initiatives,” Blackburn said, noting one way the city helped even while seeming to fall behind. Despite taking nearly eight years to pass a law limiting plastic bag use, the approach the council wound up taking was better for small business, and the law’s gentle rollout in the spring – after an explanatory seminar early next year – can also help shops deal with the change.

Cambridge Local First has a couple of ideas underway with elected officials that could make the city even more small-business friendly than it is, Blackburn said.

“We hope to make concrete progress we can announce at the start of the new year,” she said.