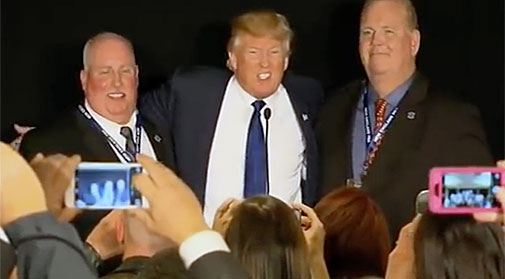 Cambridge police groups have affirmed that they are not a part of an endorsement of Donald Trump’s run for president by a group claiming to represent regional law enforcement.

New England Police Benevolent Association executive director Jerry Flynn said a week ago at a meeting in New Hampshire that the group considered Trump the person who would “unite this country in an effort to save police officers” – as well as being the only candidate who showed up.

“It’s open season on police officers,” Flynn said, explaining that “at this point, those of us who are supportive of any party have to look at what is the best interest of our members.”

Trump made a claim for that role by arguing in his remarks for a mandatory death penalty for anyone who kills a police officer and maintaining a militarized police force nationwide, despite a growing number of deadly force incidents nationwide that have raised alarms about police policies and the justice system. “Police forces throughout the country have had a hard time. A lot of people killed,’’ Trump said

Flynn told The Associated Press that his nonprofit group represents nearly 5,000 members from about 200 union locals across the region, and the group lists offices in Chelmsford, Quincy and Worcester as well as in Manchester, N.H., near where the endorsement was made.

Cantabrigians have since expressed dismay, with Black Lives Matter Cambridge telling Al Jazeera its members weren’t surprised at the endorsement “of racism, xenophobia and misogyny. We are only surprised by their honesty in offering such an endorsement. New England is a region rife with white male hatred, and this endorsement brings that to light.”

“At a time when relations between civilians and police officers are at a low, such an endorsement is incredibly counterproductive and speaks volumes,” said Samuel M. Gebru, an organizer and consultant who got his start at Cambridge Rindge and Latin School. “Apparently, Donald Trump was the only presidential candidate to attend this event and the association had to either endorse him or endorse no one. They should have chosen the latter.”

Gebru said the “remarkable” work of Cambridge police spoke louder than a press release addressing or even denouncing the endorsement, but others called on officials to clarify their position.

Cambridge resident Abe Lateiner – in a conversation on Facebook with Gebru – said that if the endorsement from the Benevolent Association didn’t represent local police, “they should release a public statement saying so and detailing their plan for pushing back on this decision. Otherwise they put their relationship with our community in serious jeopardy.”

Trevor Culhane, an activist living in Cambridge, engaged in a Twitter conversation with police spokesman Jeremy Warnick, asking for a department response to the endorsement and saying “silence while fellow officers endorse racism may not be a political affiliation, but it sure as hell is political.”

Warnick told Culhane the department was not affiliated with the Benevolent Association, and that its views and values were not reflective of the department.

Sgt. Dennis O’Connor, president of the Cambridge Police Superior Officers Association, affirmed today that “there is no connection” between his group and the regional group. “We don’t get into [endorsements] and we have nothing to do with that group in New Hampshire.”

“We have no connection with any police benevolent association. The CPPOA is its entity, our own union, and we’re not endorsing anybody,” Crowley said. “If there are individuals who are members of the police department who support [Trump] or have done something with this, it has nothing to do with the CPPOA.”

The Patrol Officers Association made at least one endorsement within the city several years ago but has since steered clear, he said. “We’ve certainly been asked in the past to do things and I know sometimes we have, but for the most part we steer away from it, just because it causes too much dissension,” he said. “It’s something that should be an individual thing. Most people feel that and they don’t want the union getting involved.”

“We haven’t made any endorsement, and I don’t expect that we will,” Crowley said.

This post was updated Dec. 26, 2015, to more accurately identify a source.