Citizen complaints against police officers could get another approach to resolution 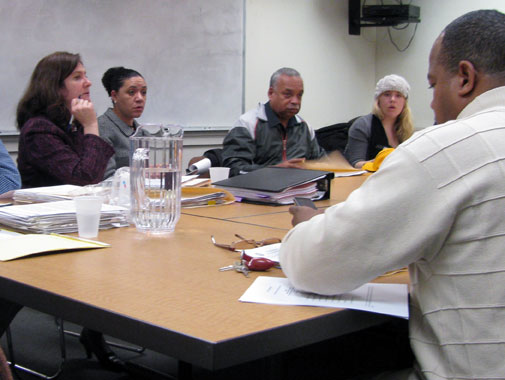 Citizen complaints against police officers could get another approach to resolution

The Police Review and Advisory Board, seen meeting in February 2010 after the arrest of Harvard professor Henry L. “Skip” Gates Jr., is an option for people with police complaints. Deputy Supt. Christine Elow is second from the left. (Photo: Marc Levy)

Cambridge police officials are considering a new procedure for handling civilian complaints against officers, one that is tougher than the current mediation option but less stringent than a formal investigation and finding.

The new procedure, which calls for a meeting including the accused officer, his or her supervisor, and the Police Department’s oversight and investigations unit to discuss ways an incident could have been handled differently, is being proposed in an atmosphere that appears very different from situations in cities where police killings have led to a nationwide wave of protests.

One of the things that sets Cambridge apart: Police here fired their guns only four times from 2010 to 2014, not counting the 2013 manhunt in the Boston Marathon bombing – and fired only to put down an injured animal.

Another: The police department seems to be far harder on accused officers than is the civilian review board that has existed since 1984. In the past six years, the five-member Police Review and Advisory Board has found an officer at fault only once among 36 complaints. In the same period, the department has substantiated a dozen complaints out of 48 filed with police, and disciplined the officers.

And a third difference: Since the 2009 arrest of Harvard professor Henry L. “Skip” Gates Jr. on his own front porch near the university brought the police under a national spotlight, the department has changed direction sharply, embracing community policing, conflict de-escalation, even mindfulness training, in a departure from traditional policing.

Gates, an African-American, was arrested after a neighbor called police to report a possible break-in. Gates, who was returning from a trip and trying to open a jammed front door when the caller phoned, argued with Sgt. James Crowley and was arrested for disorderly conduct; the charges were dropped. In the nationwide furor that followed, President Barack Obama – who became part of the furor by saying “police acted stupidly in arresting somebody when there was already proof that they were in their own home” – invited Gates and Crowley to the White House to resolve their conflict over a beer.

The arrest of Gates “was a pretty big deal in Cambridge and shook up a lot of people,” said Samuel Gebru, who grew up in Cambridge and now works as a community organizer and a consultant with ties to the Ethiopian and African immigrant community. “It changed the way policing happened and made us think more critically about how we police. [Police Commissioner Robert Haas] has invested a lot more time in training: on race relations, mediation, conflict resolution.”

“That’s not to say we’re perfect in Cambridge, but there is a lesser incidence of police brutality,” Gebru said.

The proposed new option for handling complaints would “provide an opportunity for training” and allow the officer “to reflect on whether the complainant was treated with dignity and respect,” according to minutes of a November meeting of the city’s civilian police review board where the new policy was presented. The complainant would have to agree with handling it that way, and the process would be “transparent” to him or her, the minutes said.

If adopted, the process would add another option to an already complicated menu. Now, a person aggrieved by a Cambridge officer can file a complaint either with the police or with the Police Review and Advisory Board. If the complainant files with the board, his or her complaint will be investigated by the board with the police department’s Professional Standards Unit. The board will decide whether the complaint is justified, not justified or if the facts are “inconclusive,” but it has no power to discipline an officer. It can only make recommendations.

If the person complains to the police, he or she can choose mediation or a formal investigation by the Professional Standards Unit, leading to a finding that the officer was wrong or the officer acted correctly. Discipline may follow.

Elow, former head of the Professional Standards Unit and now in charge of daily operations, said many complaints stem from a “misunderstanding” on both sides: The civilian doesn’t understand “what the role of the police officer is” and police officers don’t see “how they are perceived.” Many of these complaints can be mediated, she said.

Mediation is not offered in cases where “there is a clear rules violation,” Elow said, only when it looks like a misunderstanding led to the complaint.

One mediation Elow described involved an older African-American driver who complained that the younger African-American officer who stopped him never identified himself or said why he had stopped the driver. It turned out that the officer had given his name and explained the stop multiple times, Elow said.

The experience had been so terrifying and stressful that the older man could not hear the officer, she said. At the mediation, “he broke down and cried,” she said. “There was so much that each of them had missed,” she said. The complainant was satisfied, Elow said.

The lesson for police: “How do we understand … what people are going through?” she said. “People see the police through different filters. These are important conversations I am having in my own home,” said Elow, who is African-American and has sons.

Before police started using mediation in recent years, “a complainant came in, we interviewed both sides, then mailed out letters,” Elow said. “I didn’t feel like complainants or even officers walked away with an understanding” of what went wrong.

Despite the new era of policing here, police still use force in their work, although the number of incidents has declined. Incidents include pointing a gun, hitting a person with a nightstick, handcuffing someone after bringing him to the ground, using pepper spray or simply putting hands on a person.

Use of force reports

According to a public records request by Shawn Musgrave that was posted on Muckrock.com, a website that helps people make and track information requests, most incidents from 2010 to 2014 involved police trying to make an arrest. Another substantial category was force used on people who were resisting orders for psychiatric hospitalization because a doctor, a police officer or another authority deemed them “a threat to themselves or others,” Elow said.

“One of the things we’re doing so we don’t have to use force is that 20 percent to 25 percent of the department is trained in crisis intervention,” Elow said.

The training is ongoing, said Jeremy Warnick, director of communications and media relations for Cambridge police.

Gebru, the consultant and activist, recalls his own experience with complaining about police behavior. He didn’t even file a formal complaint, but tweeted about “an issue” he had with an officer who stopped him “for a silly reason,” he said. The next day, a senior police official whom he knew through his community work called to follow up, Gebru said. 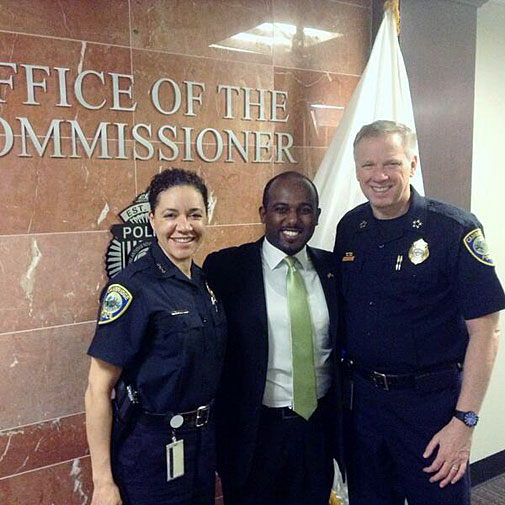 The Twitter feed of Samuel Gebru includes a picture of him in June 2014 with Elow and Police Commissioner Richard C. Haas.

“I said, ‘Is this special treatment?” and she said, ‘No, we do this with everyone.’ That was reassuring,” Gebru said. He gave a statement at police headquarters and later decided to withdraw his complaint after officials confirmed that the officer didn’t follow proper procedure, he said.

“It was not that big an issue” and would have taken more time than he wanted to spend to pursue, he said. “I ended up unknowingly having a very good conversation with the officer months afterward. Sometimes we can have misunderstandings,” Gebru said. “You don’t know what’s going through somebody’s mind.”

Cambridge police union officials were contacted with requests to comment on this story.