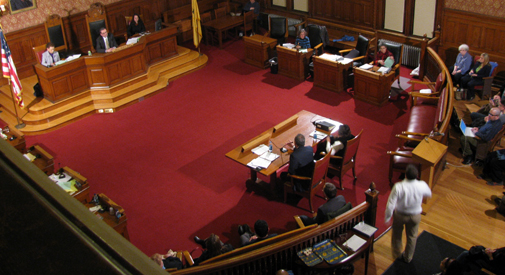 If our City Council had a theme for its current term, the most likely to come to mind is one of “missed opportunities” – prominently on display in two recent decisions by a majority of the council: creating the process for choosing a new city manager; and deciding to send a proposed municipal lobbying ordinance to committee rather than to the city manager.

Because I have experience as an executive with nonprofit organizations, I am approaching these issues thinking what “best practices” should be for the council, which has a role similar to that of a board of directors.

The administration of Rossi and predecessor Robert W. Healy lasted approximately 35 years. A “best practices” approach for any organization seeking new leadership recommends that the governing body take a break from the old leadership. This is not a comment on that leadership’s competence or trustworthiness, but recognition that the end of such a long tenure is a time for reflection on the current and future needs of the organization.

An interim city manager would not be a candidate for the permanent position. The interim’s role would be to competently manage the city, provide the council with an independent assessment of the city’s departments and resolve short-term issues so an incoming permanent manager can focus on larger issues. A six-month or longer contract with an interim manager would also provide the council with adequate time to assess the needs and hopes of Cambridge over the next decade and get public input on those needs and hopes before beginning the search for a new manager.

Instead of this approach, the council committee guiding the search voted to extend the Rossi’s contract for several months. The timeline approved by the committee has a vote on selecting a new city manager occurring in late September. Public input is shoehorned into 20 or 30 focus groups, all to be conducted in June by an executive search firm that has yet to be selected.

Another missed opportunity happened when the council was presented recently with a policy order sponsored by first-term councillor Jan Devereux, requiring that all professional lobbyists representing companies and organizations doing business with Cambridge disclose their campaign contributions, the names of their clients, the policies they tried to influence, the compensation they received and the dates of their lobbying communications. Instead of referring this order to the city manager for action, as requested, the council voted to refer it to the Government Operations, Rules & Claims Committee, from which it is likely never to emerge.

The debate on this order was both surprising and disappointing. One councillor bizarrely conflated the goals of this order with the advocacy efforts of the Cambridge Residents Alliance, a completely different activity altogether (Disclosure: Although I am a proud member of the Alliance, the opinions for this piece are my own, not the Alliance’s). Other councillors, before the 6-3 vote, said that there was no need for this order as no corruption on the part of the council has been proven.

This reasoning reminded me of an experience I had when working in the nonprofit sector, trying to convince other nonprofit organizations to adopt policies of zero tolerance and mandatory staff training on issues such as discrimination and sexual harassment. Some organizations balked at these policies, saying they would imply that their organization was guilty of harassment, discrimination and similar bad practices. Nothing could be further from the truth. Using the “best practices” theory, zero tolerance policies act as a badge of honor for the adopting organization. Such policies clearly state that the mission and culture of the adopting organizations are enhanced by adopting zero-tolerance policies and that future staff and board members are on notice of these policies.

The lobbying policy order could be a similar badge of honor for Cambridge. Similar orders have been adopted by Los Angeles; Chicago; Austin, Texas; Philadelphia; and San Francisco. Enacting this order would be consistent with the progressive and good government traditions that motivated Cambridge to choose the city manager/City Council form of government.

I urge the citizens of Cambridge to watch closely how the search for a new city manager is conducted and to urge the council to report the lobbying order out of committee to be forwarded for action.