International band is ‘Between 12 Waters’ Wednesday for truly multicultural vision 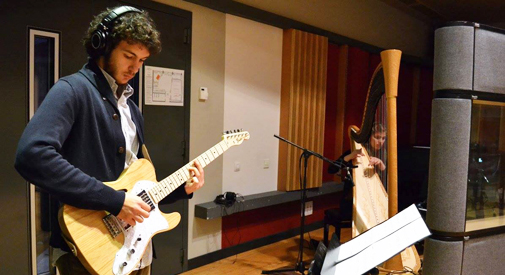 International band is ‘Between 12 Waters’ Wednesday for truly multicultural vision

If ever Cambridge’s Multicultural Center were to live up to its name, it’s Wednesday, when a band of performers from nine countries come together to perform “Between 12 Waters: Live,” with songs inspired by jazz, R&B, flamenco, Turkish folk, Armenian folk, and Brazilian and Indian music.

The force that brought them together is Alper Tuzcu, a Berklee College of Music grad from Istanbul whose album “Between 12 Waters” is so eclectic that he was obliged to put together an 11-piece band (also sourced out of Berklee) whose members barely repeat continents.

“The idea of this concert is to promote different languages and cultures through music to promote better cultural interaction in our global communities,” said Tuzcu, who was influenced to compose “Between 12 Waters” by his time studying abroad in Valencia, Spain.

“As a small Mediterranean town with many different languages, cultures and people living side by side, it reminded me of Marquez’s Cartagena or Hemingway’s Havana. I felt an artistic connection to the city, and it made me want to contribute to the culture there,” Tuzcu said.

Among the performers are five vocalists, including Belgian harpist Pia Salvia, who sings the Tuzcu composition “Une Rose” – the first music video from the project.

“Between 12 Waters: Live” is at 8 p.m. Wednesday at the Multicultural Arts Center, 41 Second St., East Cambridge. Doors are at 7:30 p.m. Tickets are $15 general admission, $13 for JazzBoston tickets or $10 for students and seniors with identification.