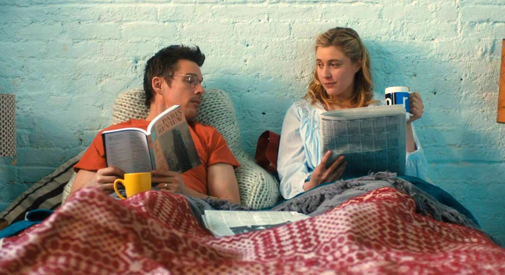 Rebecca Miller, who’s always been able to woo a talented cast (being the daughter of “Death of a Salesman” playwright Arthur and wife of Daniel Day-Lewis can have that effect), wades into Woody Allen territory with this acerbic, yet not quite fully formed, rom-com that could easily be a sequel to “Frances Ha” or the next chapter in Richard Linklater’s “Before” series. Part of that has to do with the fact it stars Ms. Ha herself, Greta Gerwig, and longtime Linklater collaborator Ethan Hawke, but more to the point, there’s ceaseless banter from quirky personas kvetching about their fragile self-esteem and station in life (which happens to be far better than the vast majority of their fellow Americans). 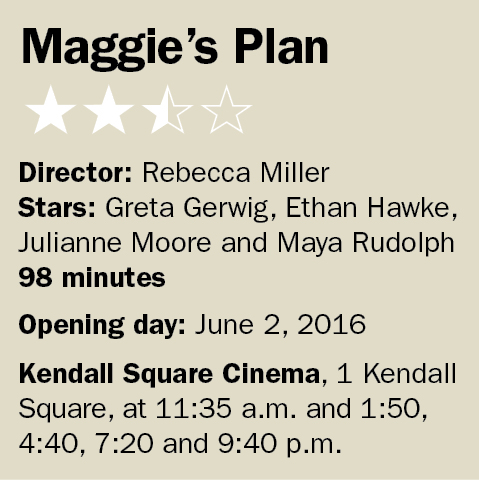 The basis of the film is an unpublished novel by Karen Rinaldi, who must be a friend of Miller’s. Or perhaps the project began as a fragile conversation at a cocktail party and took root once the financial backing got the green light. After sitting through the visual adaptation, I can only imagine that the final pieces of Rinaldi’s complicated love triangle among intellects never quite got cemented – thus its in-limbo status. Miller, who adapted the story as well as directs, is clearly all in and seems more comfortable behind the camera than with earlier efforts “Personal Velocity” (2002) and “The Ballad of Jack and Rose” (2005).

The strength of “Maggie’s Plan” comes in the early laid framework as the titular Maggie (Gerwig), strolling through the slushy cold streets of New York, babbles circuitously to her guy pal Tony (Bill Hader, dialing up his grating nasal twang) about how she’s made her mind up to be a single mother and has selected a math genius from their alma mater as the paternity donor, even though Tony recollects him to be an asshole. (Played with tremulous nuance by Travis Fimmel, he is not so much a jerk, but more a demurring hipster who makes organic pickles). This would seem to be the banner plan of the title, but a mix-up over a paycheck at the small New York university Maggie works at leads to a relationship with John (Hawke), the newly hired adjunct professor with a similar last name who’s a badass in the riveting field of fictocritical anthropology (blending fact, fiction and critical theory) and has a campus presence somewhat akin to Joaquin Phoenix’s enigmatic prof in Woody Allen’s ill-fated “Irrational Man.” Dutifully Maggie pores over the pages of John’s first novel. There’s an immediate intimacy between the two, but he’s married to an academic titan who’s a tenured department head over at Columbia (Julianne Moore, sporting a man bun). There’s two kids in the picture too, and in the pages of John’s veiled autobiographical weave about a disintegrating marriage, which Maggie describes as “screwball surreal,” the man of the house gets knuckled under for his wife’s career gains.

It’s a piquant set-up, and watching Hawke stay up late and philosophize about writing and love with the wide-eyed Gerwig is a treat, especially for those with strong proclivity for all things Woody and Linklater. Then, jarringly, just as the promising shards of awkward comedy and tensions from conflicted passions and self-centered interests take seed, we flash forward three years. Now Maggie and John are together, they have a daughter, the novel’s still not complete (perhaps a nod to the Rinaldi situation?) and John’s back to his old self-loathing funk, bemoaning others for his shortcomings. This is also where we finally get Maggie’s plan and the movie disappointingly starts to chase its tail, yielding to contrived machinations instead of heartfelt earnestness. As a result, the three principals become reduced to overeducated boors without the acumen to see beyond the pedigreed walls they stare at for affirmation. The children become their one point of redemption, and even in that, the kids too are disingenuously employed to drive plot points.

Despite its stumbles as it heads toward the finish line, the performers hold down the fort. Moore, despite being saddled with a pretentious and frequently ineffectual Madam X accent, layers enough nuance into her Georgette to be more than the mere shrew she could have been. For Gerwig and Hawke, it’s more of the same of what you know of them, for better or worse. Gerwig does stretch herself more than her pleasantly “screwball surreal” performance in “Frances Ha” – her finest moment being a four-legged crab walk across her apartment to answer the door buzzer with her toe to keep things from flowing out after having just injected a fertility payload with a turkey baster. You’d think she could have waited or ignored the door, but viewers will be grateful she didn’t.