‘Wiener-Dog’: Traveling among owners, animal reveals a lot to us about humans 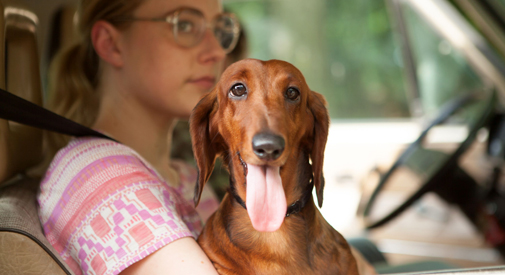 ‘Wiener-Dog’: Traveling among owners, animal reveals a lot to us about humans

Todd Solondz’s films have always been about the quiet struggles in dark corners. His first film, “Fear, Anxiety & Depression” (1989), pretty much tells you that in the title, but it was sophomore effort “Welcome to the Dollhouse” (1995), a coming-of-age tale down all the wrong paths, that cemented that notion and branded Solondz as an indie auteur to watch for. Solondz’s latest, “Wiener-Dog,” is a sequel of sorts to “Dollhouse,” as that film’s protagonist, Dawn Wiener, is one of several owners of the pivotal and titular “Wiener-Dog,” a dachshund. While not appearing in Solondz’s “Palindromes” (2004), Dawn gets an oblique reference among the travails of her cousin Aviva (a palindrome, oh my!) played by seven actors of varying race, age and gender: It’s revealed early on that Dawn has committed suicide. But from the wonderfully absurd and provocative mind of Solondz, she’s back! 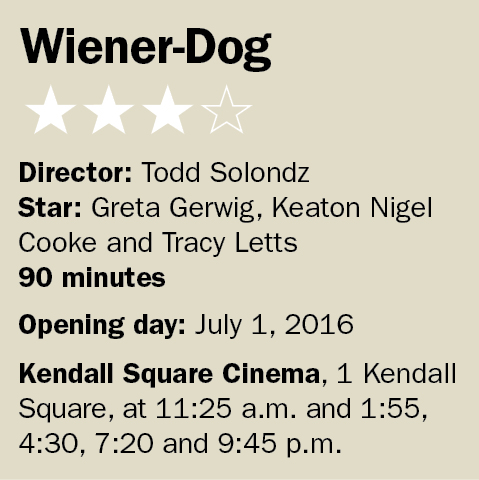 The zesty title packs a witty, inward twist, as dachshunds are known as “wiener dogs” – the deriding phrase shouted at the seventh-grade Dawn Wiener (played with great, introverted nuance by Heather Matarazzo) in “Dollhouse.” Dawn becomes the second owner of Weiner-Dog, a demure brown bitch with doleful eyes, renamed Cancer in the final chapter by an ornery blind senior (Ellen Burstyn). What the dog serves to evoke, much in the same way the ass does in Robert Bresson’s timeless “Au Hasard Balthazar” (1966), is the true nature of its handlers. Just how humane are they behind closed doors with no one but the dog and the-fly-on-the-wall us as mute witnesses? The dog’s first owner, a boy named Remi (Keaton Nigel Cooke) recovering from cancer (the opening shot of Remi languorously sprawled on the grass seems lifted right from “Boyhood”) is a kind, caring soul; it’s his father (playwright Tracy Letts) who’s the draconian asshole. “Heel, motherfucker, heel!” he shouts as he drags the dog down the street. The dog’s fate is sealed when Remi, in an act of bonding kindness (the dog is restricted until it can obey and comply with the strict rules of the house) feeds it granola, and as a matter of nature, it produces an endless trail of liquid brown shit throughout the house and down the sidewalk.

In the middle of the film there’s an intermission (it’s a spry 90 minutes, in case you were wondering) where the dog takes a sojourn across America with rotating backdrops of iconic landscapes and a flag-waving anthem to propel it along. It’s a droll, cheeky curio that may not give all a cause to salivate, but in the bigger context, it’s a perfect, idiosyncratic underscoring of how Solondz sardonically views the universe. When we return, the dog is (without explanation of transition) owned by a film professor (Danny DeVito) struggling to get his latest script sold and remain relevant to the student body that’s losing respect for him. Solondz, who is very open about the struggles of getting independent films of such dark ilk made, teaches film at New York University (which he dropped out of to pursue directing). Much of what goes on in Solondz’s films are reflections of his life and, as with the thematic recurrence of Dawn Wiener, he’s become an artist invested in the process of folding back and re-examining the past in the present. Of Solondz’s eight features, five are interlinked. His “Life During Wartime” (2009) revisited several of the characters from “Happiness” (1998), which featured a pedophile’s interactions with his son on the subject in the unhappy aftermath of revelation and reckoning.

Dawn, still with us, is a veterinarian’s aide who refuses to put Wiener-Dog down. The action triggers a road trip (to Ohio) and garners Dawn a shot at romance. Dawn here, as in “Dollhouse,” will say yes to anything (crystal meth) to keep the ball in play, and it’s only fitting that she’s played by Greta Gerwig (“Frances Ha”); there seems to be a dictum that Gerwig must appear in every independent film made these days.

Themes of mortality and the eternal elusiveness of happiness pervade “Wiener-Dog,” which is nothing new in a Solondz film. But the characters here, like the young Dawn in “Dollhouse,” feel constructed with more delicate care than in some of Solondz’s more recent fare. It helps too that the actors echo the effort with great heart, and the result is both touching and acrid. The dog is not Bresson’s deeply meaningful donkey, Christlike and in ways more human than the people around it, but a furry prop, sad and vulnerable, passed from one set of hands to the next to elicit the truthful testimony of troubled souls.