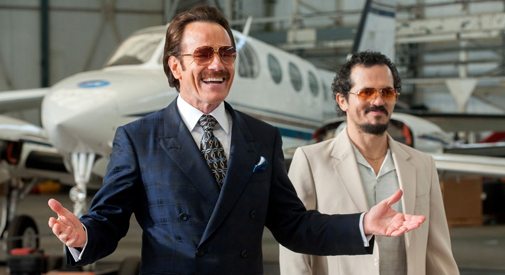 An engaging and focused performance by Bryan Cranston can’t save this outdated and ham-fisted undercover romp. Pieced together by lengthy montages and run through the same sepia filter from a million music videos, “The Infiltrator,” despite two strong lead performances, flounders less than 20 minutes in and never regains its confidence or ability to entertain. 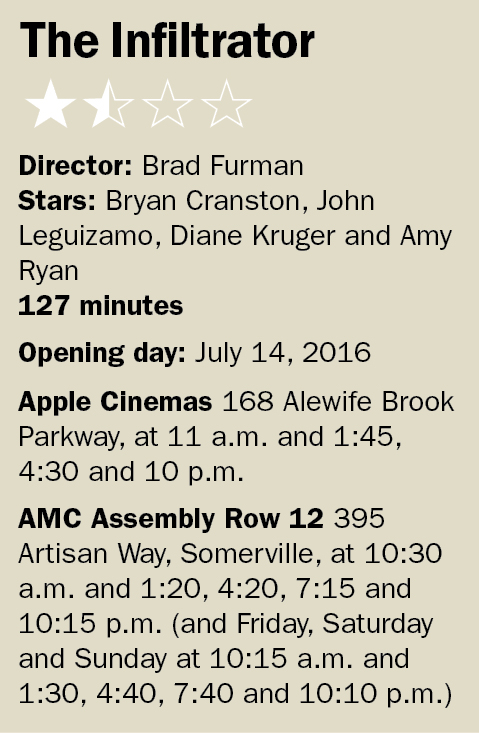 Perhaps had the film not been so clumsily stitched together, overstaying its welcome for nearly a half-hour (and using the same, near frame-for-frame shot in three different scenes in that time), it might have survived based solely on how unsurprisingly superb Cranston is. Make no mistake, this is the best we have seen the actor since his curtain call on “Breaking Bad” (with “Trumbo” being the biggest role since, I suppose, so that’s a low bar) and from the start he’s a perfect choice to play a man burdened with embodying the lives of others – of playing a part and finding himself so enthralled with it that he, for a moment or two, loses his sense of self. We’re never concerned about whether or not Mazur is a good man; rather, we grow concerned that his ambition and ability to transform himself will lead him into a sticky situation he won’t be able to bluff his way out of.

If only the quality of the film could match the quality of Cranston, who unearths enough underlying emotion from the character to make up for what the script fails to say.

The same could be said for his underutilized co-star, John Leguizamo as Emir, another undercover cop who loves what he does and is obsessed with the adrenaline high it gives him. We could have spent the entire film tracking his every move and it just might have been more interesting. Similarly, we could have used more of Joseph Gilgun (of recent “Preacher” fame) and Amy Ryan (great and also criminally underutilized) and less Diane Kruger, whose Kathy could have and should have been a wonderfully dynamic character who is clever and resourceful but instead comes off as little more than a screen filler due to Kruger’s utter lack of charisma.

How did this movie make such an inherently gripping tale such a tedious bore? Some of the blame goes to director Brad Furman, who shows little style. The film treads on the heels of big ideas and could have succeeded if it had just decided to take one more step into the big and broad rather than relying on a self-serious tone. With the voluminous hair, absurd mustaches and careful costuming, why not add flashy coloring, spectacle instead of gratuitous montages or scenes that are shot with a sense of life? The aesthetic should have been more “Boogie Nights” and less “American Hustle.”

There’s simply too many “what could have beens” here – summed up as that it could have been something greater, and certainly more entertaining, then the final product. Cranston deserves a better role, and we deserve a better film.