‘Absolutely Fabulous: The Movie’: Reality check for Edina and Patsy, who won’t pay 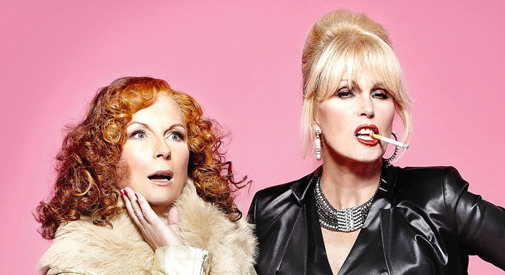 ‘Absolutely Fabulous: The Movie’: Reality check for Edina and Patsy, who won’t pay

Nearly 25 years ago, feminism got a sideways shot of spunk from a self-aggrandizing publicist named Edina “Eddy” Monsoon (TV series creator Jennifer Saunders) and her bed-hopping bestie, Patsy Stone (Joanna Lumley) when “Absolutely Fabulous” lit up the small screen from across the pond. The pair’s ostensible motto was to work as little as possible and live large – party, indulge and oh, make the scene in those gay discotheques where the spirit and style of Divine remains all the rage. It was “Sex and the City” before Candace Bushnell’s book became the bomb on HBO; it also bore a meaner, more wicked edge where saccharine-sweet life lessons were nowhere to be had. It was middle-aged women deluding themselves, and boy, was it great fun. 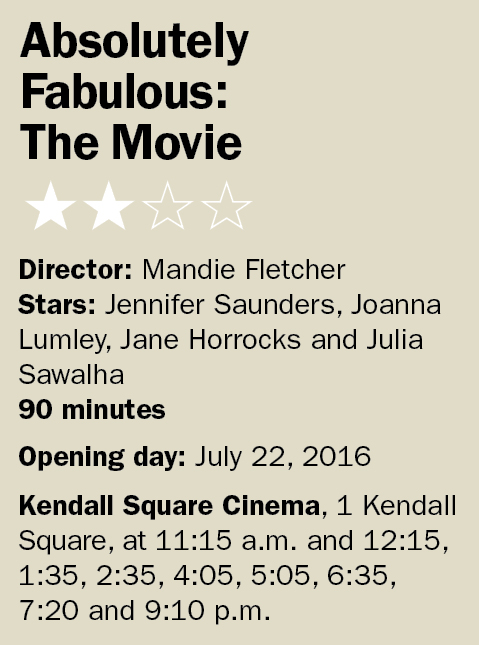 The one aspect that “Absolutely Fabulous: The Movie” isn’t likely to surpass “Sex and the City” on is its big screen success. Carrie Bradshaw and company made it back for a sequel after their first theatrical endeavor struck box office gold due to a ready-made, loyal fan base; for the “Ab Fab” pair, there’s a lesson to be learned about striking while the iron’s hot (fans got their last regular doses of the series in the mid-2000s) and the quality of production values. Still, Saunders and Lumley are able to parlay their party-hearty cougardom of the ’90s and play it up for too-old-to-matter (or entice) disappointment that becomes a self-effacing lens inside the souls of those who hold on too long for minimal gain.

To underscore how the sands of time have shifted and the dames of debauchery have not, the film gets underway with Eddy pushing her lazily assembled memoir of raucous times in the PR biz to an editor (at Random Penguin, nod, wink) while Patsy does Tony Montana-sized lines of cocaine in the waiting room. Fumbling for relevance and a foothold in history, Eddy claims credit for Sting trying to save the rainforest and all the celebs and artists wearing AIDS shirts back in the ’90s, to which the editor retorts, “Your life may be worth living, but it’s not worth reading. It’s shit.”

That harsh dose of post-World Wide Web reality might crush some, but not the stiff-lipped Eddy. The one big success dangling from her pocket has always been the “To Sir With Love” singer Lulu (who suffers numerous indignities from the side effects of Eddy’s shenanigans). Her client list, through ineptitude and neglect, has otherwise dwindled while the financial demands of her freewheeling lifestyle have mounted. Ultimately she catches wind that Kate Moss (a bit on the career wane herself) is on the look for a new publicist, so after Kate she goes.

That quest is pretty much the thin veil that drives this elongated version of the TV show, which at turns feels like one of the lesser Peter Sellers “Pink Panther” offerings. It’s not well crafted (directed by Mandie Fletcher), and is in fact, a qualified mess, but there are some genuinely wicked and darkly funny moments to be had, like the jacuzzi on the French Riviera tagged a “smoothie of old sperm” because rich elder gentlemen frolic in it with swimsuit models – or the out-of-left-field revelation of just how “Mad Man” Jon Hamm lost his innocence. And then there’s Joan Collins, who’s impossibly under every floppy straw hat at a chichi resort – does that woman age?

In all the frivolous pursuit of decadence and the luxe life, the sad footnote here is Eddy’s introverted daughter Saffron (Julia Sawalha, in a largely thankless role) and the toll on the relationship Eddy’s self-centered interests have taken over the years. They still live together, and Saffron in turn has her own daughter (fresh face Indeyarna Donaldson-Holness as the sassy hipster Lola), but the anxiety between the two is so misplaced and contrived that the scenes with the pair clashing just suck the fun out of the indignantly bawdy air. Saunders’ script, it seems, knows how to age misbehaving social-climbers gracefully (Eddy becomes aware of her fading charm, increasing weight and needy proclivities) but struggles to grow the family roots.

How the “Ab Fab” film will perform with stateside audiences will be based on the nostalgic returns of folks who recall the pre-Brexit England of Margaret Thatcher, when Mr. Bean and Robin Leach loomed large and satire with a side of feminine sophomoric silliness felt free and liberating. Given the reshaping of the world in the interim, can a comedy circa “Seinfeld” still resonate? Saunders and Lumley pucker up and give it a game go. They’re a disastrous pleasure to watch, but it’s also a bit like driving a car that has only a CD player and no way to rope in the playlist on your iDevice.