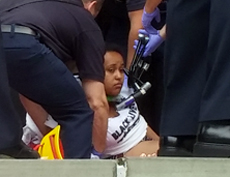 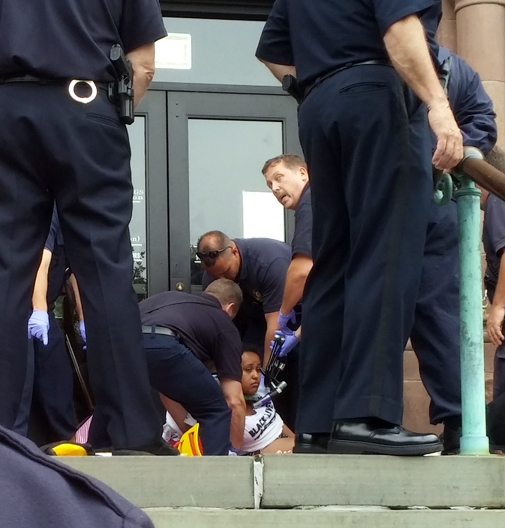 Four Black Lives Matter Cambridge protesters chained themselves to the front door of City Hall at 5:40 a.m. Wednesday, kicking off a nine-hour demonstration to protest the lack of affordable housing that ended with their arrests.

“Rents have skyrocketed since the ’90s,” explained one member of Black Lives Matter Cambridge, noting the forced movement of most of Cambridge’s poorer folks to places such as Everett, Malden and Lynn. “[Gentrification is] the erasure of black people, the erasure of people of color, the erasure of immigrants, of all poor people.”

Protesters made four demands and asked that city councillors pledge to follow through with them: that the City Council require residential developments to devote at least 25 percent of their units to affordable housing; that the city allow the Massachusetts Institute of Technology to build housing for its 5,500 graduate and postgraduate students who live off campus, opening up housing for families; that free land, such as parking lots and city properties, are not sold to private developers but instead used to build affordable housing and develop public spaces; and finally, that a rent-to-own program be developed to help low-income residents become homeowners.

There were a handful of police in the early morning, later joined by a team of officers in heavier uniforms who removed the front door’s handles, slid emergency stretchers under the protesters and moved them aside. Barricades were set up around the protesters, obscuring them until protesters expressed concern. Police removed one, leaving only the one separating protesters from the front door’s foot-traffic.

Police stayed huddled around the protesters so tightly they remained mostly hidden.

Food and water for the protesters had to go through the police. When one young woman tried to pass up a water bottle, an officer snatched the bottle away, spilling much of it, but a different officer brought out two bottles of water while that occurred, and “the protesters were in fact permitted” to eat and drink throughout the protest, said Jeremy Warnick, director of communications and media relations for Cambridge police. 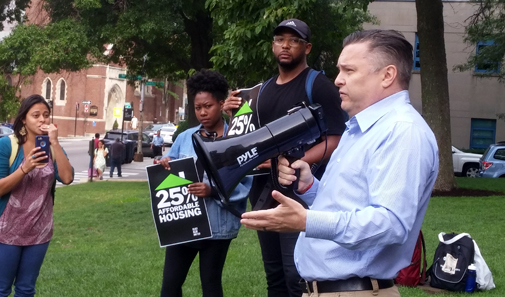 Vice mayor Marc McGovern addressed the demonstrators a few times, saying that while he agrees with many of their points, most studies reviewed by the council don’t support a 25 percent housing rate. “In some cases it works really well. In some cases, it doesn’t,” he said, noting from atop the steps of City Hall that officials are pushing for a mandatory 20 percent affordability rate – almost twice the current rate of 11.5 percent – and that he wants to add a mandatory minimum for three-bedroom units.

Some of the information circulating through the crowd was incorrect or false, he said – mainly the talk among those gathered, rather than the group’s press release and demands – but to the chagrin of protesters he also wouldn’t sign Black Lives Matters’ pledge. After a couple of interruptions during one speech, McGovern grew frustrated and ended it early.

McGovern, citing his background as a social worker, maintained he was on their side and stuck around, speaking to individuals in the crowd and making his case to those who would listen.

Mayor E. Denise Simmons eventually came to the front steps and also addressed demonstrators, also getting plenty of back-and-forth. While Simmons and McGovern seemed confident that 20 percent affordability was attainable, there were still “four or five” steps left in the process for that ordinance to go from Housing Committee to council vote, she said, and even then seven votes were needed to pass it. The next committee meeting is expected to be scheduled imminently.

“If there are only five individuals willing to sign on and seven are needed, we need to know the names of those two individuals who have not signed on, so we can lobby them and leave you alone,” said Didi Delgado, a leader of Black Lives Matter Cambridge. 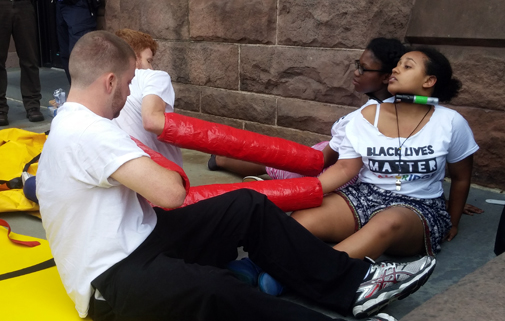 Before being arrested on charges of disorderly conduct, four protesters spent much of Wednesday locked together.

By this point, the group had lowered the demand to 20 percent from 25 percent, in line with the councillors’ goals. They still wanted officials, including the mayor, to sign its pledge.

“I’m pledged to the process,” Simmons said, earning eye rolls from the crowd.

One of the female protesters, a high schooler, pointed out a rarely discussed complication: the area median income used in formulas of affordability.

“How do we keep the city affordable for families living below 50 percent of the AMI?” she asked.

“That’s a good question,” the mayor and vice mayor said.

In addition to the committees, procedures and compromises making affordable housing a complicated issue, “affordable” is itself a broad term – defining housing aimed at households with incomes below 80 percent of the AMI.

In Cambridge that figure is about $90,000, making for a big difference between a family that makes 30 percent of that median and one that makes 80 percent. Guaranteeing a higher affordability rate doesn’t necessarily guarantee enough housing for very-low income families in Cambridge.

Around 2 p.m., the protesters were arrested on charges of disorderly conduct. Police identified Cambridge residents Andrew King, 30, and Abe Lateiner, 34, as among those arrested, and withheld the identity of the two juveniles. Lateiner was also charged with interfering with an  officer.

This post was updated Sept. 1, 2016, to reflect clarifications from the event by public officials.