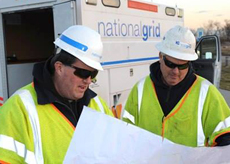 National Grid and nine other companies have drawn criticism from the advocacy group 350 Mass Action.

A “Clean Money for Climate Pledge” introduced Wednesday by the advocacy group 350 Mass Action has drawn commitments from a half-dozen Cambridge and Somerville politicians – all promising to refuse campaign contributions from executives, lobbyists and others employed by 10 major fossil fuel and utility companies throughout the current election cycle.

As of Wednesday morning, 30 candidates for the state Legislature had signed the pledge, including Senate President Pro Tempore Marc Pacheco, according to the group.

In the past legislative session, the Legislature dropped pipeline tax language that looked like a lock, failed to raise the percentage of renewable energy that utilities are required to buy and provided weaker-than-proposed support for offshore wind, the group said, blaming the “unfair influence” of utility and fossil fuel companies.

“In the end, utilities Eversource and National Grid got more or less exactly what they wanted from the energy bill,” said Craig Altemose, executive director of 350 Mass Action.

Those companies are included in the pledge, which also requires candidates to refuse donations of $200 or more from employees at BP, Chevron, ExxonMobil, Global Partners, Global Petroleum, Kinder Morgan, Shell and Spectra Energy – selected for their history of making significant campaign contributions in the state and because, as Altemose said, they “continue to advocate against a transition to renewable energy.”

National Grid didn’t respond to a request for comment. Michael Durand, an Eversource spokesman, said, “Our company and our employees have always followed the rules regarding political donations and we will continue to do so.”

Altemose, in a press release, made it clear 350 Mass Action was looking for more.

“We call upon these 10 companies to drop their obstructionist ways and instead engage as constructive participants in building a clean energy economy,” Altemose said in a press release. “In the face of the climate crisis, Massachusetts needs lawmakers who are free to stand up to fossil fuel companies and utilities and lead us safely to a future powered by 100 percent clean, renewable energy.”