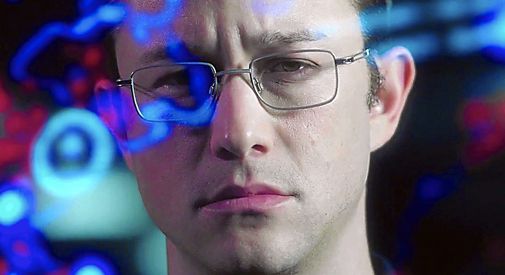 Oliver Stone’s become something of a softie, wrapping “World Trade Center” (2006), his 9/11 tale of heroism, in red, white and blue sentimentality, and making “W” (2008) a strange, off-the-mark lob with the surreal puffiness of “Being There” without the biting social undertones. His most recent effort, “Savages” (2012) showed signs of the lean, mean Stone who tapped out “U Turn” and “Natural Born Killers,” but it buckled under to contrivance and a weak storyline. So for the Stoned faithful, there’s good news: “Snowden” marks something of a comeback, a return to the realm of political and historical dramatization that powered “JFK” (1991) and “Nixon” (1995), in which controversial subjects provide a foundation for the filmmaker’s strong political leanings to seep in. It’s also a bit schmaltzy at turns, but so was Clint Eastwood’s “Sully,” which was a rock-solid piece of filmmaking. (If there’s one thing I learned this summer, it’s to let the old cutting-edge guys engage their inner sentimentality; they’ve earned it, and they inject it into films without torpedoing them.) 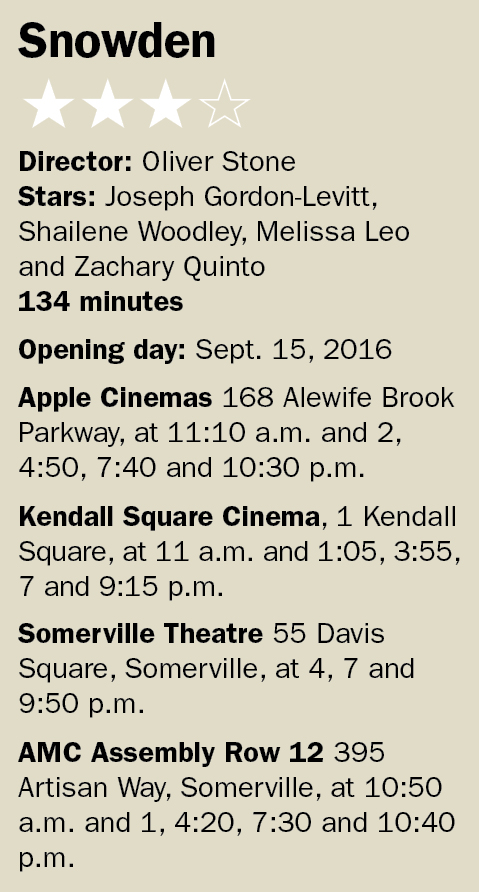 It’s been only a few years since the disclosures by former intelligence worker Edward Snowden and subsequent firestorm ripped opened a debate on privacy and security. During it all, documentarian Laura Poitras captured the real-life Snowden holed up in a Hong Kong hotel as he readied exposure of the CIA and NSA for spying on U.S. citizens without cause, hacking and mining private Facebook posts – even accessing computer cameras to look in on citizens of interest, should they care. Her film, “Citizenfour,” went on to win an Academy Award. Poitras makes her way into Stone’s “Snowden” as a character, played by the ever-graceful Melissa Leo, sitting in a room shooting Snowden (Joseph Gordon-Levitt) and “Guardian” journalist Glenn Greenwald (Spock player Zachary Quinto). Stone wisely doesn’t retrace much of Poitras’ steps, but makes the story about Snowden the man, his roots in the military, his nerdy proclivities, his cut-above skill set and capabilities and his on-again, off-again relationship with girlfriend Lindsay Mills (a vivacious Shailene Woodley) – for the two, it’s love at first IP trace.

The film’s greatest asset, besides Gordon-Levitt’s complex and nuanced performance as repulsed by the access the NSA has into people’s lives while writing code to enable it to get in deeper is its unique, under-the-hood peek into the cyber-spy game and the inner workings of government security agencies. They are miles away from anything you’ve seen in any “Mission: Impossible” or James Bond flick, but nonetheless enthralling. One of the most revealing scenes comes during a one-off field assignment in Geneva, where Snowden, supporting a higher-up (an effectively wormy Timothy Olyphant) get a Pakistani banker tanked and sets him up for a DUI to get their claws into him.

“Snowden” as an overall experience carries on a bit too long for its own good, and it doesn’t carry the visceral impact of “Citizenfour” or any of Stone’s hardboiled classics (“Platoon” and “Wall Street”), but it does boast some wonderfully cheeky supporting performances beyond Olyphant and Woodley, namely a portly Nicolas Cage as an outspoken NSA coder who’s been relegated to a basement office to be kept out of the way and Rhys Ifans as Corbin O’Brian, Snowden’s longtime instructor and handler, who literally looms large throughout the film. It’s a screen-filling performance essential to the film that Academy voters should flag for consideration at year’s end. Along the way Snowden develops epilepsy, which allows Stone a seemingly gleeful opportunity to revisit the distorted montage of distress and mania that he concocted for Jim Morrison’s acid trips in “The Doors” (1991). It’s his one egregious overindulgence, and it’s in such small strokes that it’s nearly imperceptible. “Snowden” not only reminds audiences of Stone’s acumen and pointed leanings, it’s also a frightening look behind the curtain of tangled alliances and rationalized agendas where men in dark rooms toss liberty aside under the veil of patriotism and security.