‘Demon’: In this tasteful Polish ceremony, bride wore white, the groom was possessed 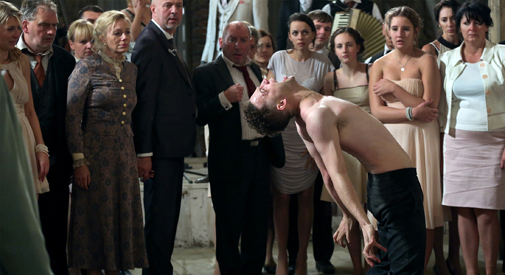 ‘Demon’: In this tasteful Polish ceremony, bride wore white, the groom was possessed

Marcin Wrona’s soft-horror thinker “Demon” unfurls a competent and moody bit of filmmaking, which, much like Robert Eggers’ Puritan period piece “The Witch,” becomes just as much about the dynamics of the society it’s set against as it is about a supernatural incursion. In this case a Polish man, about to be wed, gets possessed by a dybbuk (a demon of Jewish lore). A sad side note is that Wrona committed suicide a year ago on the eve the film, his third, was to be shown at the Gdynia Film Festival, Poland’s annual film fest. There remains as much mystery in his parting as there is in his protagonist’s slow consumption by the soul of another. 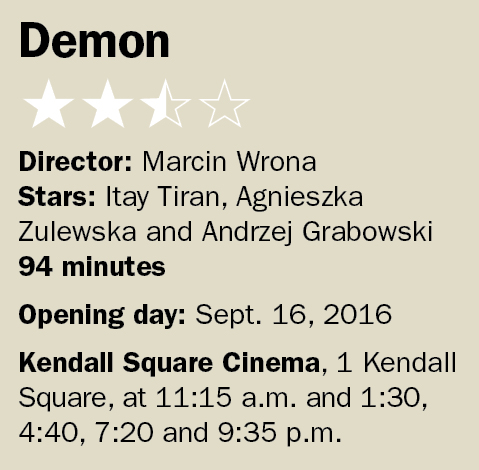 Much of the action takes place against bawdy wedding proceedings. There’s plenty of drinking and merriment, even as the spiritual affliction begins to break down the couple at the center of the celebration. Adapted from Piotr Rowicki’s 2008 play “Adherence,” the film begins on a somber, hopeful chord as Piotr (Itay Tiran),who like Jeremy Iron’s work-seeking Pol in Jerzy Skolimowski’s “Moonlighting” (1982), labors for a living wage in London but returns to Poland to marry the lovely Zaneta (a radiant Agnieszka Zulewska). The pairing is something of an arranged marriage where after the two are wed, they will be gifted Zaneta’s grandparents’ old farmhouse in the country, which is also the site of the wedding.

Following some initial male bonding with his back-home bros, Piotr, eager to prove his mettle as a spouse, gets to work on whipping the old place into shape. That includes tooling around on a backhoe, and the groom-to-be unearths a skull and other human remains but never really tells anyone about it – if he did, the suspense and plot would surely have been halved. It’s at this ominous juncture too (think the opening archeological excavation in “The Exorcist”) we know something from the beyond is about to take root and change an otherwise happy story of marital bliss.

Besides the appearance of a ghostly woman in black drifting about the festivities and a chorus of children’s voices calling from everywhere and nowhere, there’s relatively few goosebumps to be had in “Demon,” though the stark, wide-frame cinematography by Pawel Flis, leveraging drab, washed-out grays and clean, sheer whites, along with Krzysztof Penderecki’s tension-ratcheting score, forge a foreboding ambiance even when nothing sinister’s happening. Beyond that, its all on Tiran to convulse wildly and rifle through an array of conflicting personalities within a single scene – a tough act to pull off, which Tiran does convincingly so.

Turns out – after alcohol and epilepsy are ruled out – that Piotr’s been possessed by a Yiddish-speaking women named Hana who perished decades ago, and whom one of the wedding guests, Wlodzimierz Press’ eccentric professor, used to have a crush on. With such looming entanglements and apparitions from the past the stage feels perfectly ripe for the theatrical torments that so dotted the masterworks of Shakespeare and Dickens, but to keep the party afloat Zaneta’s father (Andrzej Grabowski) sequesters Piotr in a quiet anteroom as the festivities and a wayward squall well with Bacchanalian abandonment. In the eye of it all sits Zaneta, a ravishing newlywed, hysterical and heartbroken.

The final act sets off in odd and interesting directions. As dawn approaches many go wandering off into the fog-crested fields with varying agendas and there are plenty of didactic dissertations about denying (burying) the past and its unpleasant realities. And yes, there are nods to the torturous occupations by the Germans and Russian, but the material’s clear intent is to remain as universal as possible in its revelations.

At the end of “Demon,” not all the threads and themes tie up. The film floats off an enigmatic abstract. You can almost see the filmmaking process with Wrona chumming the waters with macabre tentacles and philosophical probings only to back away and say “that’s it” sans an explanation or guide-wires. Gore-aholics seeking blood and bone are destined for disappointment. “Demon” is about history and folly. Like the foggy morning fields and the director’s curious demise, it becomes a series of long wispy fingers that stir and perplex with vacuous beauty.