Car in fatal Sept. hit-and-run has features that could help public identify the driver

Car in fatal Sept. hit-and-run has features that could help public identify the driver 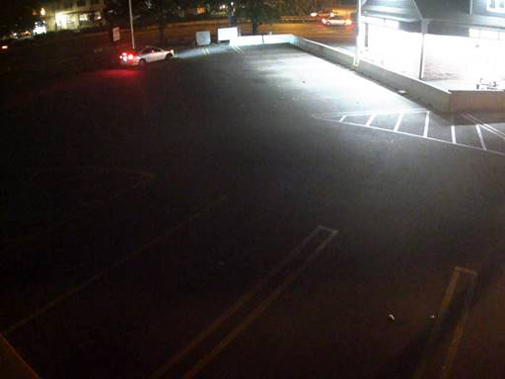 A car suspected in a fatal hit-and-run leaves the scene across a parking lot Sept. 25, revealing its three brake lights and neon frame around the license plate in this image provided by police.

The public is being asked to help identify the driver in a Sept. 25 hit-and-run that killed Somerville resident Alberto Flores, 41, also known as Alberto Santos-Flores.

He was hit at about 4:15 a.m. at Wellington Circle in Medford. State troopers found him badly injured and had him taken to Massachusetts General Hospital, where he was pronounced dead.

The car that hit him may be a Honda Civic, possibly silver or gray and from the model years 2011-15, according to the Middlesex District Attorney’s Office and State Police.

But there are more distinctive features that could help identify the car and its driver: one of its brake lights is on the trunk lid or rear spoiler, and there is a neon light surrounding the license plate. Security camera footage from the scene also showed large black scuff marks under the right brake light and at the rear of the car on the passenger side.

Members of the public with information about the car, driver or incident are asked to call Medford’s State Police Barracks at (781) 396-0100.