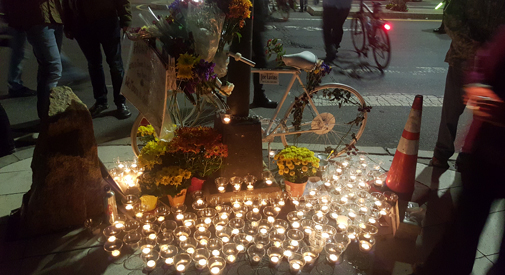 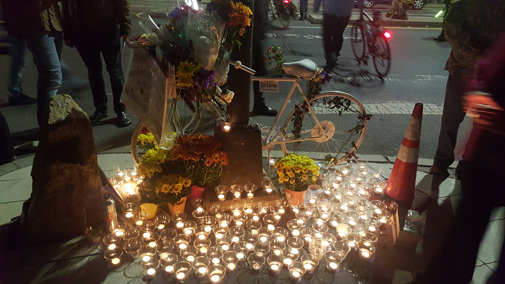 More than 200 cyclists, co-workers and friends gathered in Porter Square on Tuesday to hold a candlelight vigil for Dr. Bernard “Joe” Lavins, who was struck and killed Oct. 5 by an 18-wheeler while bicycling through the tangled intersection in front of Christopher’s restaurant.

Details of the accident have yet to be released, but his death marks the second cyclist in Cambridge killed in a little over three months after Amanda Phillips was doored and struck by a lawn service vehicle June 23 in Inman Square.

The ceremony, led by the Rev. Laura Everett, head of the Massachusetts Council of Churches and a cycle advocate, dedicated a “ghost bike” memorial in Lavins’ memory, and mourners recalled Lavins, a 60 year-old research scientist at Ironwood Pharmaceuticals in Cambridge. 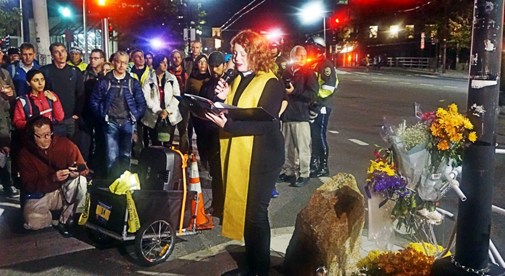 He was a cautious man, mourners said, who took a bike safety class put on by the company before he began commuting from his home in Lexington two years ago. (To get away from the frustrations of driving and to get more exercise, because he loved junk food too much, one friend pointed out.)

Ken Carlson, a colleague of Lavins’ at Ironwood who also chairs the Somerville Bike Committee, and Chris O’Dea, another co-worker who cycles, called for “something positive to come from the terrible tragedy” – namely to make Porter Square and all hazardous hotspots throughout the city safe for cycling.

Five city councillors attended the event – Craig Kelley, Leland Cheung, Jan Devereux, Nadeem Mazen and vice mayor Marc McGovern – and John Adams, proprietor of the Kendall Square pool hall Flat Top Johnny’s, gave a history of the ghost bike, a symbol of remembrance and a reminder to motorists to share the road. Peter Cheung, a video editor and cycling enthusiast from Jamaica Plain, painted Lavins’ ghost bike after it was found in the basement of Flat Top Johnny’s. Admiration of his work brought a sweeping response from Cheung: “No more ghost bikes.”

Lavins leaves behind a wife and a 13-year-old daughter – and a heartbroken cycling community that wants change now.