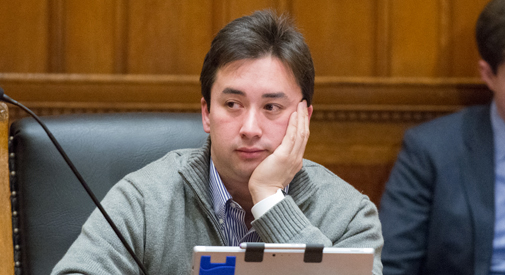 An effort to empty the City Council’s “awaiting reports” list for a just-appointed city manager failed Monday on a 2-7 vote.

“Just to be clear,” said the councillor who proposed the move, Leland Cheung. “This is not erasing the work we want coming back from the city; this is an opportunity to make sure the things we care about are understood and are getting the attention they deserve from the incoming city manager, who wasn’t there when he was first introduced.”

But only fellow councillor David Maher was swayed to vote in favor of the motion.

Among others who spoke, opinions included Craig Kelley’s simple “I don’t like this idea” and Jan Devereux pointing out that among the items at risk of being removed was one having do with finally pinning down the ongoing problems with audio-visual changes in the council’s Sullivan Chamber. “We’ve had a great example of yet another fail [tonight],” she noted.

Though removed orders could be returned to the list within 48 hours, according to City Clerk Donna Lopez, vice mayor Marc McGovern didn’t see the point of “wiping everything clean and having to add things back and refile … This doesn’t seem like the most efficient way to do it.”

Resident Heather Hoffman, who attends council meetings regularly, spoke during public comment to offer perspective longer than some of the officials seated in front of her:

“This is a terrible idea. I’m the person who spoke a few times about the fact an item regarding open space in East Cambridge had been on the ‘awaiting reports’ list for four and a half years. And what happened when I did that was that the ‘awaiting reports’ list got purged. It could be reasonable to purge the list after a year and a half [when] you can reasonably conclude that city staff has not put that at the top of the list and it’s probably not getting any closer, but on the current list the oldest is from April 4. That’s not even eight months. It’s utterly ridiculous to do this. There are things you all thought were important enough to go on that list, and they have not aged out.”

Cheung’s order is similar to a request by outgoing City Manager Robert W. Healy in 2013. “It’s what we’ve historically done when we got a new city manager,” Cheung said Friday, although it’s happened only once in memory – Healy was in office for 32 years before handing things off to his promoted deputy city manager, Richard C. Rossi. Like Rossi, new city manager Louis A. DePasquale has been leading Cambridge for decades, including as assistant city manager for fiscal affairs in Cambridge since 2002.