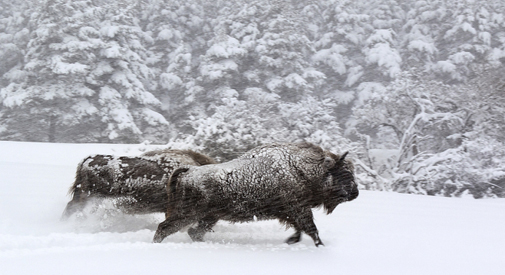 French filmmakers and naturalists Jacques Perrin and Jacques Cluzaud, who wowed audiences with their “how did they get those shots” documentaries “Winged Migration” (2001) and “Oceans” (2009), are back at it – and impressively so – with “Seasons,” another years-long undertaking that looks at the wilds of Europe over the four seasons and across 80,000 years. How indeed, you may ask, but what Perrin and Cluzaud have concocted is a political statement and a parable about the ill effects of man on nature over time. 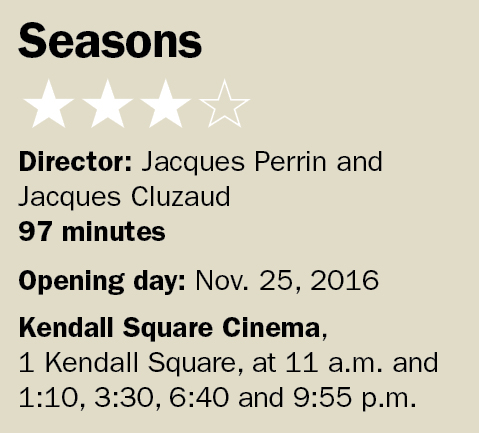 We begin with bison and wild horses roaming the forests and plains of Europe. Humans are not on the scene – or they are in that furtive something lurking behind a tree, that peeping eye masked by a thicket of leaves. They’ve yet to learn to hunt or farm, but as the film winds through the seasons, and the ages, every season moving forward in time and each new dawn, there is an absence of a different beast. The bison and bear are the first targeted; the wolf is hunted down by Victorian-era farmers. (On a recent tour of Fresh Pond with Ranger Jean, I learned that around the same time in Cambridge, wolves were common enough to force folk to live behind stockades – evidence of human change even here).

It’s a clear and obvious statement: Humans have altered the earth, its fauna and flora, and malignantly so. Between the grim, didactic realism, the filmmaking pair capture some astounding imagery – and without the use of long lenses, meaning all the chase scenes of wolves corralling a horse after a brutal scamper through the forrest, or bison butting heads during mating season, are done close-up. The patience required to capture such unstated moments – as with any nature documentary – is daunting to even contemplate. The one reassuring note is knowing that the wilds in which this was shot still exists in some capacity.

Overall, the film’s a scrumptious and enthralling drink, but not as wholly affecting as “Winged Migration” by any regard. The beauty of that film lay in immersion into the footage without any spoken word. It was a visceral experience evoking the primal instincts of the subjects and a tour the world traveled above, through the eyes of the migrators. That could have been true here too. After all, isn’t the implied message that nature left alone and unadulterated by the hand of man will abound?