‘Jackie’: As Camelot crumbles around her, first lady is tougher than some might think 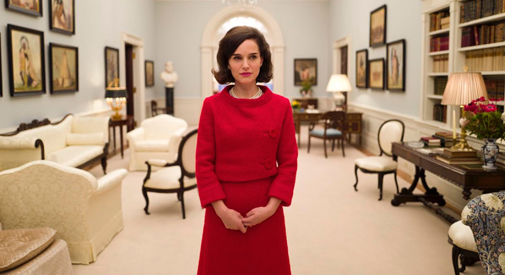 ‘Jackie’: As Camelot crumbles around her, first lady is tougher than some might think

Adversity is a great yardstick for character, and filmmakers in on this and worth their mettle understand that the more compelling route to get at a historic icon is in the moments or incidents that come to define them, not the rote, cradle-to-the-grave biopic format. “Selma” showed this with Martin Luther King in (2014), as did this year’s “Loving” – albeit on a much smaller scale – for the couple behind a landmark Supreme Court ruling on race. And now we have “Jackie,” an up-close visit with the first lady in the immediate aftermath of her husband’s assassination. 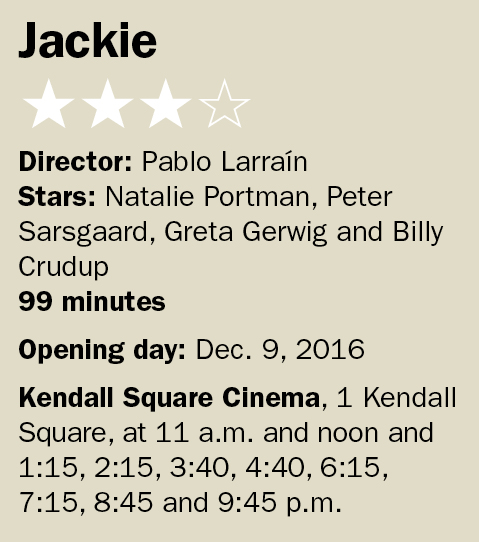 Pablo Larraín’s film has a thick, dour air atop a quiet yet deep-rooted resolve. It’s an impressively bold go at such a revered presidency, and much of the project’s success hangs on Natalie Portman’s fully immersed and utterly mesmerizing portrait of the grieving first widow, not to mention a beguiling score by Mica Levi that palpably embosses the emotional undercurrent of every scene. (If you’re unfamiliar with the composer, she similarly brought an aural pulse to Jonathan Glazer’s “Under the Skin” in 2013. With “Jackie,” she will surely become a hotly sought resource.)

The film begins at the Kennedy compound in Hyannis Port with an unnamed journalist (Billy Crudup, ostensibly based on Life magazine’s Theodore H. White, who interviewed Jackie around that time) arriving to get the scoop on the window’s sense of loss. “There’s the truth that people believe,” Jackie tells him, “and there’s what I know.” That sets the table for a back-and-forth that, while polite, tilts often toward the adversarial, thought it does bear strokes of cathartic relief for Portman’s Kennedy. Throughout the interview, the media-savvy Jackie holds the reins tight, and her turmoil tighter. “You want me to describe the sound the bullet made when it collided with my husband’s skull?” she bluntly injects, confronting the inevitable before the journalist can wind his way around to the question. From the journalist’s stunned face we rewind to Dallas on Nov. 22, 1963.

The framework constructed by Noah Oppenheim, a former TV exec, history junkie and penner of such odd accoutrements as “Allegiant” (2016) and “The Maze Runner” (2014), weaves the narrative intricately and in ever deepening layers as it pops back to the Hyannis Port veranda every now and then, then back to Dallas and the White House as preparations are made for JFK’s funeral and the swearing-in of Lyndon Johnson (John Carroll Lynch). The driving thrust of the film becomes Jackie’s desire to have a memorial procession with soldiers and a horse-drawn carriage, similar to the ceremony put together by Lincoln’s wife after his end – the problem being that authorities and counsel remain averse because they don’t know if assassin Oswald had fellow conspirators and worry about the security risk.

Through this post-assassination limbo the film makes us feel as if Jackie’s being pushed out of the White House (“A first lady must always be ready to pack her suitcases, it’s inevitable,” she quips during the interview) and there’s a degree of insensitivity to her plight. She’s not alone, however, with her two main allies being brother-in-law Bobby (Peter Sarsgaard) and confidante Nancy Tuckerman (a nearly indistinguishable Greta Gerwig); the film’s most touching moments arrive in the pair having Jackie’s back and Jackie having to tell JFK Jr. and Caroline that their father’s “not coming home.” If you don’t feel something well up, you probably clapped when “Old Yeller” died.

Larraín, a long way from his native Chile but no stranger to politics and history – as he proved with “No” (2012), his take on the 1988 Chilean Pinochet referendum – takes some daring gambles, especially his graphic reconstruction of the Daley Plaza assassination where you’re practically inside the head wound and, later, a blood-splattered Jackie as she comes to terms with the reality of events and begins the process of cleansing herself.

The film does a lot to underscore and debunk the Camelot myth, never shying from fact or innuendo. Oppenheim and Larraín clearly have their portrait of the woman, and it’s a strong one – though one that probably would not have held up without Portman. With Stéphane Fontaine’s camera often tightly trained on her luminous, porcelain face, she holds the screen with such precise emotive nuance it’s astonishing she never ebbs. The actress, well deserving of her Oscar win for “Black Swan” (2010), reaches for another level and sticks it. “Nothing is ever mine – not to keep, anyway,” her Jackie remarks early on as she reflects on loss and her evolving situation. In conveying such a soulful loss, Portman has made the film and her future winning prospects.