If amazing musical siblings Arndt on tour, they’re busy being undergrads at Harvard 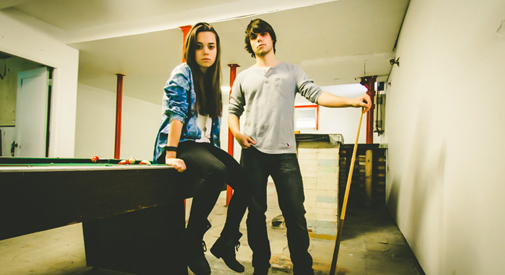 If amazing musical siblings Arndt on tour, they’re busy being undergrads at Harvard

It would be amazing enough that Jocelyn and Chris Arndt are siblings attending Harvard together, but it’s not enough for them. So they’ve also been not attending Harvard together, because they’ve been touring relentlessly as a bluesy, old-fashioned rock band – described by New York Scene Report as sounding “like they were raised on ’60s rock records and would enjoy having a drink with the ghost of Janis Joplin.”

As undergrads, they study English (Jocelyn, 21) and music engineering and computer science (Chris, 19), but in their other life they’ve hit more than 100 shows in the past 12 months, with stops in 25 states that have included the Sundance Film Festival, Mountain Jam Music Festival, CMJ and South by Southwest, including winning the audience vote for best band at Summerfest in Milwaukee. (Keep in mind that Summerfest is huge, putting Boston Calling to shame with around 800 acts stretched over 11 days. The Arndts were part of the event’s Emerging Artist Series with a whopping 43 other bands.) They estimate that they traveled 30,000 miles last year.

That’s what’s behind the album they released Wednesday – called “30,000 Miles,” it’s a live album of 14 tracks recorded around the country, in radio stations and music venues from New York to Los Angeles “and everywhere in between,” the Arndts say. “When you listen to us this way, completely live, I think you can really hear how much passion we put into what we do.”

The album is streaming on Glide Magazine and there’s lots of other Arndt music to listen to at their Soundcloud page, including “Edges,” the studio album released last year that got airplay on more than 200 stations nationwide.

Congratulations are due Jocelyn and Chris Arndt for their hard work and skill, but being able to listen to their work for free means it’s fans of their stripe of blues rock that really benefit.

People who love it will be disappointed to visit their website, though. As of the release date of “30,000 Miles,” the page used to list the band’s upcoming events is empty.