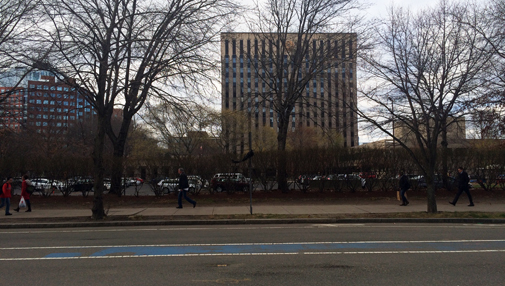 The John A. Volpe Transportation Center and its 14-acre parcel in Kendall Square will be redeveloped by the Massachusetts Institute of Technology. (Photo: Marc Levy)

The community is invited to meetings Feb. 16 – delayed from this week because of a predicted snowstorm – to discuss the redevelopment of the Volpe site in Kendall Square, as well as to hear about other projects and issues concerning the developer, the Massachusetts Institute of Technology.

The institute was selected by the federal government in November to be its partner in a $750 million redevelopment of the John A. Volpe Transportation Center and its 14-acre parcel in Kendall Square. It beat out a dozen other firms in a three-stage process that began in 2014.

“The institute is looking forward to working with the broader community to create a shared mixed-use vision for this key site, which we think will serve as a vital connector between Kendall Square and nearby neighborhoods,” said Sarah Gallop, the institute’s co-director of government and community relations, in a late January email.

As the selectee, MIT will construct an approximately 400,000-square-foot building to house the Volpe Center, which does transportation research. In exchange, it gets to develop the remainder of the Volpe Parcel at 55 Broadway, which is bounded by Broadway, Third and Binney streets and the 6th Street walkway (excluding the Third Square apartments at 303 Third St.). The parcel is the last major undeveloped area in Kendall.

The Feb. 16 community meetings are:

At noon, in Room W20-308 on the third floor of the Massachusetts Institute of Technology’s Stratton Student Center, 84 Massachusetts Ave.

At 5:30 p.m. in Salons 5 through 7 at the Boston Marriott Cambridge Hotel, 50 Broadway, Kendall Square.

The meetings were once set for slightly different times and locations Thursday, but an expected snowfall of to 12 inches changed the institute’s plans.