‘T2 Trainspotting’: The gang’s all reunited, some for revenge, some for happy ending 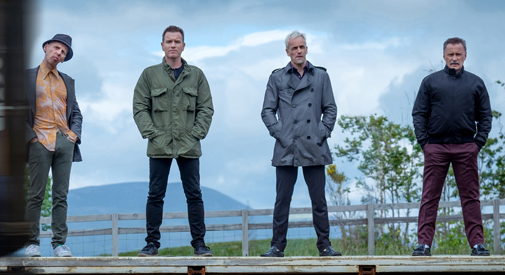 ‘T2 Trainspotting’: The gang’s all reunited, some for revenge, some for happy ending

It’s been 21 years since Danny Boyle and Ewan McGregor shocked audiences with that creepy dive into a fecal-fleeced toilet in “Trainspotting,” somehow along the way making being a heroin addict a hilariously biting – albeit tragic – trip. Part gonzo romp, part sad social satire, the stylish tale followed the vein-piercing antics of four Edinburgh junkies, slaves to skag and capable of doing anything to score their next fix, including ripping off their best mates. Not a great lot to throw in with, but a highly entertaining one with the fix-needing squabbles reaching the near hyperbolic absurdity of the Three Stooges. 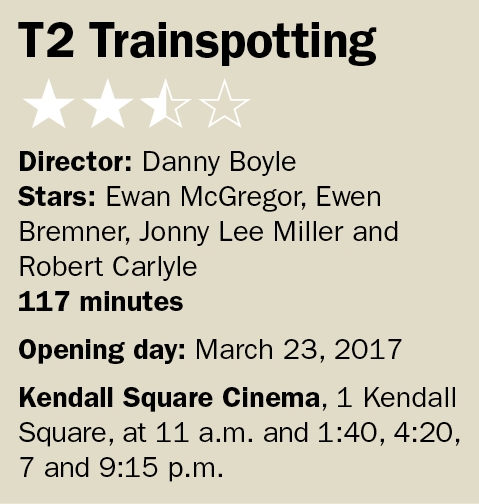 We first catch up with McGregor’s Renton (the guy who stole all the money and – as the film has it – ruined everyone else’s life) living in the Netherlands, having appeared to make good on his promise at the end of “Trainspotting” to change. But a small cardiovascular event trips him up (literally) and sends him back to Scotland, where he learns his mom has passed. A quick check-in with old pal Spud (Ewen Bremner) finds unhappy times for the sweetly pathetic user, who’s been unable to shake his monkey. The union’s cemented by an uproarious eruption of vomit that becomes one of the film’s most lingering images, the same way excrement took center stage the last time. Next up on the reunion tour is Sick Boy (Jonny Lee Miller of “Elementary”) who half wants revenge but also needs Renton to help launch a massage parlor that’ll offer happy endings to those in the know. Renton agrees, partly out of remorse and old times’ sake, but also because he’s drawn to Sick Boy’s girlfriend and house-madam-to-be, Veronika (Anjela Nedyalkova, whose sultry yet knowing presence lights up the screen).

Then there’s Begbie (Robert Carlyle), the mercurial malcontent continually on the brink of rage, happy to bash in a stranger’s head for so much as a sideways glance. You’d think all that anger might have given him a heart attack by now, but no, “T2” finds him in prison (because of his vicious beatdowns and unlikely to be released any time soon), a bit rounder and yet perhaps more lethal. How he gets out requires an extreme act of masochism, and when he finds out Renton is in town his veins bulge and his eyes pop – if he could transform into the Hulk, he would. But this is a film about junkies trying to go straight (though Begbie never used; violence is his addiction), and there’s no superhero in sight, so Begbie has to settle for Michael Meyers mode as he stalks Renton through the Edinburgh nightscape.

Shot lavishly by Anthony Dod Mantle (“Rush” and “28 Days Later”) and cut to a hip soundtrack that includes Blondie, Frankie Goes to Hollywood and of course, Iggy Pop (of “Lust for Life,” the first film’s anthem), all of Boyle’s typically slick, kinetic style is here, and then some. The use of CGI to translate the at-times indecipherable Scottish brogue, or the amount of floors Renton has to walk up because the elevator in Spud’s seedy apartment complex is out, adds subtly poetic accent. Boyle and his crew should be proud.

Where the film falls down is not in its building up, but in its come-around. The concept of four men living on the edge for decades (some with children and others who rely on them) is a piquant prospect. Can they ever find happiness and stability? Are they capable of making a regular go of it? Those questions and more never quite get answered as the film turns into the Begbie rampage show, which is too bad.

Other nagging questions: Why not “Trainspotting 2”? Aren’t the filmmakers afraid of a mixup with that second “Terminator” flick, also embraced as “T2”? But then again, Begbie’s madman quest seems eerily akin to one of those cybernetic machines sent back from the future on a do-or-die mission of extermination. How this “T2” ties up isn’t satisfying enough, but enough loose ends are left on the floor for another fix in 10 or 20 years.