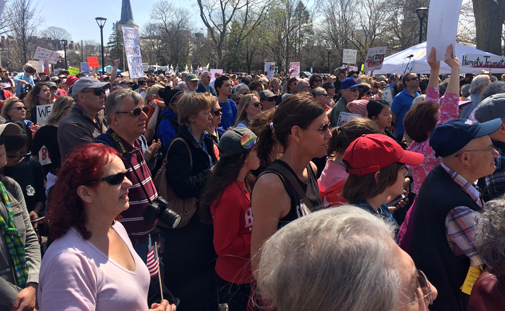 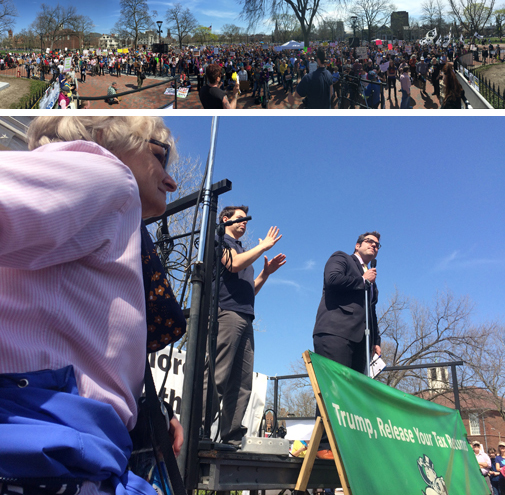 State Rep. Mike Connolly speaks Saturday at a Tax Day protest on the Cambridge Common. At top is a panoramic photo Connolly took of the rally crowds. (Photos: Marc Levy)

A peaceful crowd estimated at upward of 2,000 by organizers and police called for President Donald Trump to release his tax returns and change his policies during a rally on Cambridge Common on Saturday, which was Tax Day for much of the nation.

It was part of a “Tax March” series of protests held in some 200 cities nationwide, but not all were as peaceful. A rally held in Berkeley, Calif., turned violent as pro-Trump and racist counter-protesters arrived, leading to more than a dozen arrests and nine injuries, including six requiring trips to the hospital, according to the Berkeleyside news site.

Police said Cambridge’s rally went off without a hitch, though, and crowds during the event seemed uniformly in favor of the ideas expressed from a dais taken in turn by state Rep. Mike Connolly, who served as emcee, and advocates for education and transportation funding; criminal justice reform; housing protections for lower-income residents; and action against climate change.

“We pay our taxes” 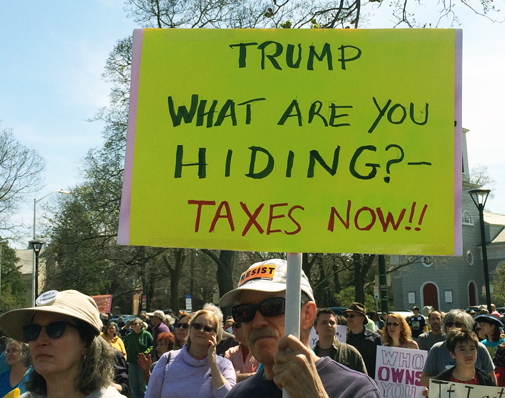 One of many signs brandished at the Saturday rally.

The theme of taxes colored many of the speeches.

“When we have a president who talks about budget cuts that take us back to the ’80s and when we have a president who hides his tax returns … we have to look at why,” said Cassandra Bensahih, of Ex-Prisoners and Prisoners Organizing for Community Advancement and Jobs Not Jails. “Last year I owed taxes. One single woman owed $1,000 to the IRS, and I got a letter after two months that they would levy everything I owned if I didn’t make arrangements right away. But you have big corporations where no one goes after them. You can’t owe one dollar without them coming after us. It’s too much power being used the wrong way.”

Spencer O’Dowd, of the New England Independence Campaign, told the crowd that funding problems for the region’s education and infrastructure, including for the “infamously foundering” Massachusetts Bay Transit Authority and the T, would be easily resolved by the taxes paid by residents if not for the movement of $12 billion annually in recent years, or $800 for each person, to so-called red states, where the electorate and policy-making leans conservative.

“We’re all here today because we’re responsible citizens and we pay our taxes,” O’Dowd said. “We pay enough taxes in New England to maintain all our infrastructure and all our education. Where’s it going? It’s going to Kentucky, it’s going to Mississippi, places that don’t want those programs and think taxation is evil.” 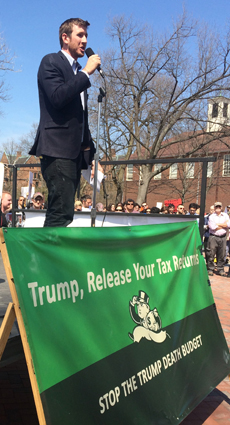 A proposal for a People’s Budget that would close corporate loopholes, invest in debt-free college, workforce training and small businesses and change the tax structure to a more progressive rate was suggested by Molly Hannon, of the Massachusetts Alliance of HUD Tenants, and Josh Hoxie, a tax policy expert from the Institute of Policy Studies. “The American tax system used to be very progressive. We were actually one of the most progressive tax systems in the world,” Hoxie said, noting that in the 1950s – with Republican Dwight Eisenhower in the White House – the top tax rate was 90 percent. “And we had the biggest explosion in the American middle class in history.” (The current top tax rate is 39.6 percent.)

Workers are more productive and efficient than ever, Connolly said, but the resulting wealth flows to “the top 1 percent … that means we have to work longer and work harder so we can even hope to have the same standard of living as our parents.”

Connolly, who represents East Cambridge and East Somerville in the state Legislature, made issues local by citing the constant squeezing out of his neighbors in Cambridge’s Wellington-Harrington neighborhood. He applauded the local organization Cambridge Area Stronger Together and the local City Council for an April 3 order calling for an impeachment investigation into Trump for violating the U.S. Constitution’s emoluments clause and using the Oval Office and government policy to enhance his own business interests.

The reminder that Cambridge was the first city in Massachusetts to call for an investigation drew cheers from the crowd.

“A sense of possibility” 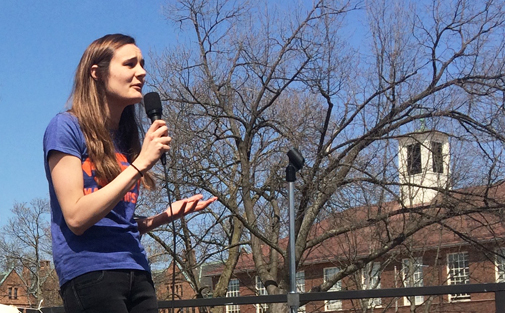 Emily Kirkland speaks of the dread and fear she felt after Trump’s election.

“There are thousands of us standing together to demand truth and accountability from our president, and truth and justice from our government,” said Emily Kirkland, director of organizing for the 350 Massachusetts environmental group. The coming weeks were bringing more protests, she said, including a March for Science planned for April 22; People’s Climate March for April 29; and May Day protests on May 1.

But if Connolly brought the impact of the rally home, Kirkland made it personal.

“In those very dark, cold winter days right after the election, I felt so tremendously weighed won by dread and fear, by my certainty [Trump] would do everything he could to impede climate action and by his plans to gut the EPA and eviscerate clean-energy research, not to mention education, housing, humanitarian aid, all in order to move money into the Pentagon, pay for deportations and to pay for a border wall,” she said. “My anger, my dread, my fear, it weighed me down.”

“Yet today, on this beautiful spring day, I feel my dread and my fear newly balanced by a sense of possibility. With so many of us standing up, speaking out and showing up,” she said, “who knows what we could do together?”