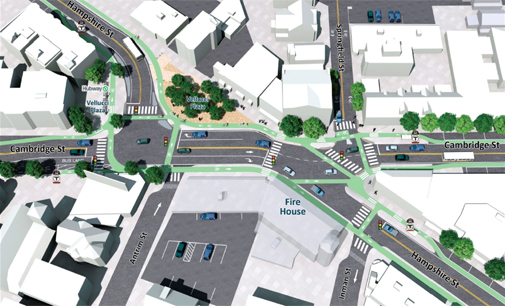 Plans for Inman Square add a plaza on Hampshire Street that bends it to the west where it meets Cambridge Street.

Just in time for National Bike Month – and almost a year after bicyclist Amanda Phillips was struck and killed – the city announced its redesign plans for Inman Square.

The chosen design revealed Tuesday is the “signaled” solution, also referred to as the “Northside Bend,” which splits one complex intersection into two, putting a bumpout (and public plaza) in front of where the Punjabi Dhaba restaurant is situated. That results in bending Hampshire Street to the west as it meets Cambridge Street.

The solution was met with mixed reactions, but most everyone was happy something was being done, city councillor Marc McGovern said.

Cambridge officials have felt pressure to make a safer, more bikeable city sooner, rather than later, since the death of Phillips and a fellow bicyclist only months later. Activist groups such as Cambridge Bicycle Safety and the Boston Cyclists Union have been among the most vocal in pushing for solutions – most hoping for a peanut-shaped “roundabout” solution considered to offer more safety benefits, said Michael Davidson of Cambridge Bicycle Safety, pointing to its “15 mph rated speeds and raised crosswalks.” 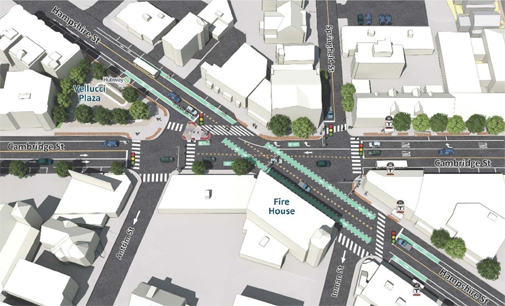 Still, councillor Jan Devereux said she was overall impressed with the process. “The public feedback that I heard was for the most part very constructive and will help the staff refine the design. It’s going to be a much safer intersection and a much more attractive and pleasant place to linger,” Devereux said.

Along with concerns about lost parking, altering the current configuration puts attention on quick fire lane access for the Inman Square Fire Department, which is perched right on the intersection. Considerations of impact to local business were weighed as well.

Steve Bercu, a Cambridge resident and president of the Boston Cyclists Union, felt the change might even help business: “One big positive is that bicycles, which rival motor vehicles in usage along this corridor, will be able to travel through the intersection via protected bike lanes. With these changes, I expect even more bikes traveling through Inman Square, which studies suggest will be a boon.”

In the aftermath of Phillips’ death, the city banned left-hand turns onto Cambridge and Hampshires streets at the intersection, and outlined with green paint a conflict zone and bicyclists’ right of way. A similar quick revamp of Porter Square took place after bicyclist Joe Lavins was struck and killed by a truck three months after the Inman Square death.

Just a week ago the city announced plan to install a separated bike lane on Cambridge Street from the Harvard Science Center down to Inman Square, to be completed early this summer and dovetailing nicely with the Inman Square redesign. Cambridge Street east of Inman, a pretty complex and gnarled urban stretch, will remain as is for now.

About 150 people attended Tuesday’s meeting. Traffic, Parking & Transportation Department Director Joseph Barr said the Inman redesign would begin in the fall and that the plans and more specific timelines would be posted soon on the Department of Public Works website.